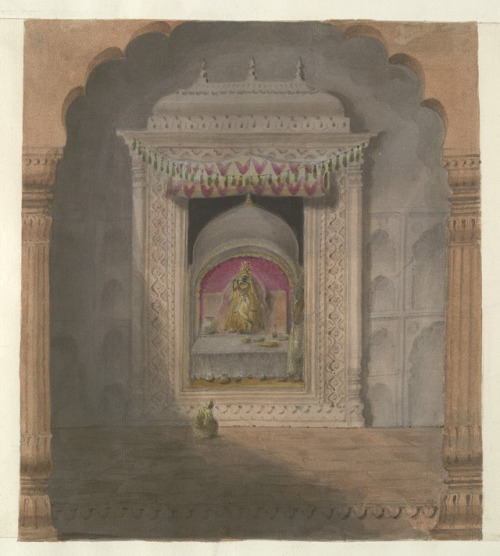 Mahatma das: Chanting means to enter Krishna’s world and put your world on hold.
It’s so ironic sometimes, when we’re chanting instead of being absorbed in Krishna or krishna leela or something about Krishna we are absorbed about what am I going to do later today, the problems I have to solve, the appointments I have to meet etc. So we’re actually absorbed in our world rather than Krishna’s world and to me that’s quite ironic because we are chanting Krishna’s Holy Names. In the more advanced stages of japa a devotee can see krishna leela and more advanced stages a devotee enters krishna leela, he’s not just seeing it he’s part of it. So of course that’s a high stage nama, Rupa guna Leela it’s the last stage but obviously when we’re chanting the Holy Name we should be absorbed in Krishna, if not in His leela just feeling His presence, as we said yesterday, aware of the relationship, the qualities, the form it may come it may enter, that’s desirable. But we really have to be conscious that when we’re chanting to leave our world, to leave our life and put it on hold while we’re chanting. Sometimes I like to tell devotees think of your life as a number of various light switches; work as a light switch, family as a light switch, this as a light switch that as a light switch, so when you sit down to chant japa internally just turn off all the lights switches of your life. And by turning down the light switches of your life then you can be absorbed in Krishna rather than your life. I know this may sound simple and maybe you think it’s not so effective but the idea is that the mind usually has free range, is thinking about so many things - what do I have to do now what I’ll have to do later what didn’t I finish yesterday, what about this problem I’m having with this person, how will we resolve is what this problem I’m having, with my health or my finances or my other relationships are always thinking how to deal with them, aren’t we? So when we chant japa if we don’t do something to control the mind or put it in another mode the tendency for the mind to continue thinking as it always does continues, it’s natural, because we haven’t really consciously made an effort to say: now during these next two hours we don’t think of these things, these things are off limits. By going internally in thinking of your life like light switches and internally turning one switch off once it’s on you’ve made an internal shift that could make it much easier to be absorbed in your japa because internally you’ve turned your life off. Another thing I tell devotees, similar to this is that let’s say your day begins at seven and you get up at five, so internally you can tell yourself let’s say today is Tuesday, so it’s Tuesday I’ve woken up at five but internally Tuesday hasn’t begun because my day begins at seven, that’s when I get ready for work or school or whatever it is I do my service let’s say. This is more for people who live outside the temple but let’s say your day starts at seven you have to start getting ready so internally your day hasn’t started. Today is not Tuesday what is today it’s nothing it’s japa time it’s going into Krishna’s world we don’t have to worry about Tuesday, Tuesday has not yet begun. So if you can internally make this adjustment just sit down and think I’m going to chant my rounds, Tuesday starts at seven o'clock now it’s five a.m. I have two hours of free time so I can go into Krishna’s world, I can enter into the transcendental world. I don’t have to remain in this world because today hasn’t started yet. So sadhana, the early morning sadhana is all about today hasn’t started and it’s just about you and Krishna and going into His world. I often say sadhana is a means of transcending your world and going into Krishna’s world. Now it’s interesting because some self-development coaches they say you should get up early and you should go into a kind of a meditative state and part of that meditation is how to achieve more during the day, so you’re actually thinking about your day and how you’re going to do more, which is not bad advice but I think as the first thing you’re going to do in the morning it’s not good advice. So I like to say when you go into chanting you go into Krishna’s world and you transcend your world, so you leave your world on hold you go into Krishna’s world. This way you can get more easily absorbed in japa and it actually works because as I said before a lot of times all we really need to do is just have a little conversation with the mind basically saying now these next two hours this is what we’re doing so just take it easy and you know don’t worry about anything else, will come back in two hours and deal with it. As simple as that sounds it can make a huge difference. So why don’t you try it see how you like it and if you benefit from it, it helps your japa that’s fantastic and it will if you actually do it right!
To watch the video: https://goo.gl/brgzsH