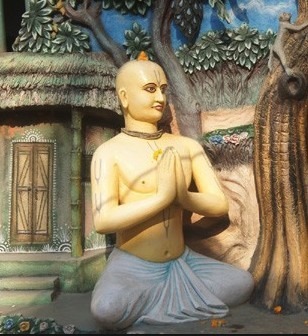 From A Meditation on the Importance of True Humility” in “Back to Godhead, Vol. 53, No. 5 (Sep/Oct 2019):
Guru Dasa (disciple of Bhaktimarga Swami): “The Tao Te Ching advises that humility is the best policy. One quote I like is translated as follows: ‘If the sage wants to stand above people, he must speak to them from below.
If he wants to lead people, he must follow them from behind.’ (Chapter 66)”

“Jesus also advised humility. He said, ‘So the last shall be first, and the first last: for many be called, but few chosen.’ Matthew (King James Version) 20:16.”

“Last year I heard a talk about this same principle at a conference in San Francisco attended by hundreds of defense and corporate lawyers. We were told how the U.S. Marines follow this principle – they eat together by reverse rank order. The newest private eats first. The general eats last. It is not a written rule but is a tradition going back for centuries.”

“False pride in ourselves or in our knowledge makes us miserable. Humility is liberating. When I think about how small I am and how little I actually know, it is liberating, like a weight lifted off my back. I am not in control, so why worry? Stress at work? Stress at home? It will all pass. It is just material nature and time playing their usual tricks. All of our stresses and insecurities are like a fleeting shadow play. Shakespeare said it well: ‘All the world’s a stage, And all the men and women merely players; They have their exits and their entrances, And one man in his time plays many parts.’

“We all have our parts to play at various stages of life, but unlike the actors in a Shakespeare play, we forget we are acting and think we are the character we are playing.”

“True humility does not mean self-hatred. It’s an acknowledgment of our own limitations, and that is all. As I have heard some wise friends say, one who is humble does not think less of himself, but thinks of himself less. We should seek that humility which does not diminish our sense of self-worth but abhors narcissism and self-promotion.”

“Finally, the value of humility in our spiritual quest is that it opens our minds and hearts to instruction from higher authorities. If we do not have humility, we close the door to learning. Spiritual sources of knowledge are guru, sadhu, and sastra. It’s easy to feign respect for these higher authorities and put on a show of humility; it’s not as easy to truly achieve that humility. Without achieving it, who are we fooling? We might fool others, and we might fool ourselves, but we can’t fool the Paramatma in our hearts, the Supersoul who sees and knows all. Ultimately only the Supreme Personality of Godhead is the witness who actually matters – and we can’t fool him. So why try?”