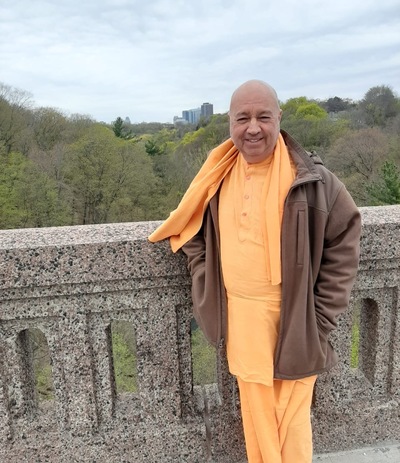 I took a chance, a risk… It was starting to sprinkle. Tiny drops from the sky made polka dots on the stairs.
I had finished one of those live-stream presentations on Iskcon Toronto’s Facebook page on the topic of “The Art of Forgiveness,” then joined our crew for the pot-banging in support of health caretakers after which I decided to put in my allotted time for my daily trek.
Whether those polka dots were going to stay for seconds or if they were to fill in to be a solid wetness on the concrete surface, I was determined to walk. My clothes might get drenched, my socks get soggy, it didn’t matter to me at that point. I just had to go and do myself the favour of a regular work out. It would mean a better sleep and that circumstantially would transpire into better service for the next day.
If I were to get wet due to Indra’s mercy it would mean that the god of rain was pushing me to move faster in order to keep warmer. Anyways, adventure is good. It hardly rained. As I said, I took that chance. I let Krishna do the doing and being the ultimate IN CHARGE. I felt He will roll out all things in the way He wants. It’s actually His choice. It’s simply a moment of surrender. In fact for just that one hour (of walking) that it took it was an attempt at surrender.
That is the feature of the day that should dominate. Surrender is the act of letting go. It is a very liberating mindset—one that is difficult to master. Simply the effort has to be made and then whatever is lacking from the participants part becomes compensated by His merciful contribution. He fills in but we can’t take His generosity for granted.
Source: http://thewalkingmonk.blogspot.com/2020/05/sunday-may-17-2020.html
Tags: bhaktimarga swami, blogs, blogger, the walking monk
E-mail me when people leave their comments –
Follow