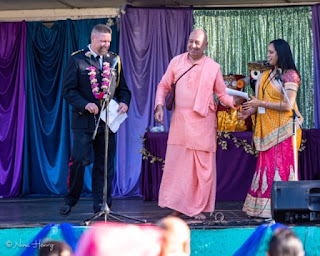 The other day in Saskatoon, Chief Pratt of the First Nations, was on the stage giving his speech at the Festival of India,  and said, "They used to call us Indians."  People laughed.  He then went on to explain that Columbus set sail from Europe in search of the bountiful land of India and then reached the shores of the New World thinking that perhaps they had accomplished their goal, or at least came upon a place of wonder —North America.  It was nice to have the Chief present.
When I arrived in Edmonton this morning (not on foot), I was approached by Bala Krishna, the co-ordinator for the Chariot Fest here, said, "I've invited a native person who will do a chicken dance."
"Great!"  I truly was enthused by this news and I expressed my appreciation for his progressive thinking.
The dance was introduced and performed.  It was a crowd-pleaser. The fellow, the dancer, Alex Twin, had a few words with me after his performance.  Nice guy.  Very together.
https://www.instagram.com/p/B0ckVx1AWtZ/?igshid=1oc1lca5ombxx
Meanwhile, with our party going on, authorities are making an all-out search for two young males charged with the homicide of three people in British Columbia.  What kind of young persons would do this senseless thing to innocent people?  What influenced them to do this?  While Alex appeared to be a mature person, we hear of two young men, perhaps about the same age, who are totally misdirected in their lives.  I feel that not enough is being done to offer stability to our young men in particular.  There is a lack of training, discipline, love—all those things which are so important.