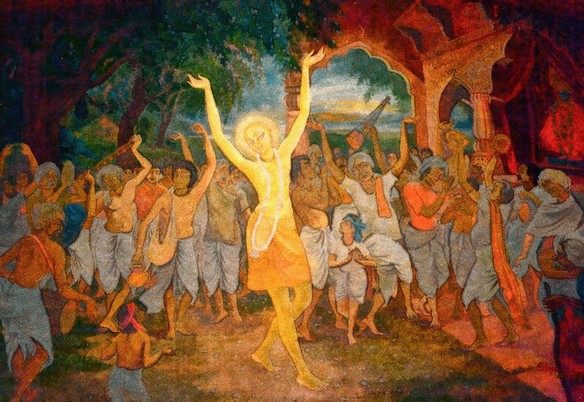 There were times when the mainstream media lumped us ‘Hare Krishna’s’ with the weird mix of pseudo religions and charlatan led cults, whose existence caused consternation among the establishment and parents alike. When out on book distribution, we would often be confronted with, “Are you sure you are not one of those dangerous David Koresh Heavens Gate suicide pact lunatics?” In many ways we had to plead our case as legitimate followers of the Vaisnava path, without being the glassy-eyed brainwashed non-thinking zombies many thought we were.

Why were these stereotypical aspersions demeaning for us? Because they were grossly misinformed generalizations. Thank Krsna that some of us live in democracies.

Devotees who have preached to various kinds of people will know there is a certain section of society which is not very well educated. Whether they be termed ‘simple folk’ or sudras, are not always able to articulate their awareness too well. If asked about their views on ethnic minorities, unscrupulous capitalists, or culturally divergent groups, chances are quite high a generalized response would be”there’re all the same ain’t they. There’re to blame for all our problems”. Vigilantism is a fairly common practice for the voiceless. Political parties with more extreme agenda’s are likely to be a voice for them and use their gullibility as votes in the ballot box. Should they assume power, the same vigilantism and generalizations become legitimized by the state and manifest as tyrannical fronts to stifle opposition. Need we be reminded of world history?

Do learned, self-controlled, truthful devotees generalize about others? All scientists are like this. All Christians and Muslims are the same. Everybody who disagrees with us is in deep Maya. Anyone who does not follow Srila Prabhupada is a demon. Do any of these statements sound familiar? Do we not run the risk of stooping down to the ignorant level if we concur with such sentiments? Is it not those intelligent devotees will more accurately say – “Actually, a good number of scientists are not avowed Darwinist stooges. They believe in some power, but cannot quite understand through the ascending process. There are many peace loving pragmatic Christians and Muslims, among who are some undercover vaisnavas. If people disagree with us, the challenge is to improve our presentation of Krsna conscious philosophy. There are many other vaisnava organizations; we just have to accept they exist”. After all, there is such a thing as – van-mayam tapa – austerity of speech BG. 17.15.

We must remember that even the likes of President Bush and Prime minister Blair, although spearheading the war on terror, are also very restrained in speech – “we are only after the extremists” they say, at least in the public forum. Conversely, Mayavadis and impersonalists will cite – brahma satyam jagan mithya – which is a generalization fraught with inconstitencies.

Is there any scope for generalizing at all? Yes and no. The most sweeping generalization we are likely to hear is – dvau bhuta-sargau loke – BG.16.6 that there are ‘two kinds of created beings’ the divine and the demoniac. Considering the rarity of devotees, Lord Krsna is giving a clue as to how pervasive the asuric mentality is. But He speaks with Samvit absoluteness. We in turn can make absolute pronouncements, such as – dharmah projjhita-kaitavo – Completely rejecting all religious activities….SB.1.1.2. and – sa vai pumsam paro dharmo yato bhaktir adhoksaje – The supreme occupation [dharma] for all humanity is that by which men can attain to loving devotional service unto the transcendental Lord….SB.1.2.6.

If we are to discuss topical relative issues however, such as the clash of civilizations, politics and religion and so on, but generalize, we can fall into the trap of dogmatic stubbornness which can effectively render a reasonable debate defunct. Besides, it is well known that any debate concerning religion or politics invariably ends inconclusively. Yet sometimes in our preaching these ever persistent issues will surface. How must we proceed?

In SB.1.2.10 the word – jiveta – indicates our need for healthiness or self-preservation by which we can practice Krsna consciousness nicely. On a selfless level, we will be concerned about preserving Srila Prabhupada’s mission, which entails self-defense against doctrinal challenges and more. Some of us may appeal to a rugged combative form of protection which seeks to lambaste anything remotely different from us, and in the process include all in a generalized description of non-conformity. Unfortunately, such actions can also result in alienation and general dislike of our motives, which at a time when we may need help, urgently, as in the case of mass litigation, or being stuck in a political quagmire and so on, may end up – all the directions are void for those without family or friends – Niti shastra. Will those who we may have slighted, come to help us in a hurry? Perhaps we are indifferent to public opinion for ourselves – loka-bahyah – SB.11.2.40 but we should certainly worry about the integrity of ISKCON – anukulyena krsnanu – to be in accord with Krsna’s desires.

At Kuruksetra, Karna was given information that the reviled Pandavas were in fact his beloved brothers. Torn between his unswerving loyalty to Duryodhana and his newfound affection, he chose not to kill his brothers in combat. He put aside his all-out enmity to discriminate, which served Lord Krsna’s purpose. In a similar way, there is something called – loka-vicara – in which we may do certain activities in order to make people favourable towards us. One of the qualities of a vaisnava is he is friendly. A friendly disposition that furnishes all our deeds both in exposing nonsense and in steely defence will ensure we get help even from unexpected quarters when we need it. In other words, there is a nice way of doing the needful.

If we intend to be a credible alternative to the woes of society, we must analyze how we conduct ourselves in the public arena – namely the internet. Our discussions are by and large intelligent respectful dialogue. The occasional tit for tat crops up now and again. Are we ever aware that perusing our web pages could be individuals who are advisors to leaders, members of think tanks for government and the like? They also seek answers and inspiration. Srila Prabhupada has given a blueprint on how to run society. If ever we were handed a country to run, say, Mauritius; where would we start? With a sizeable Christian and Muslim population conditioned to eating meat, would we implement wholesale vegetarianism, or else leave the island? A civil war is in the making. Realistically speaking we may be out of our depths. And if we are thrust in narrow minded generalities, we won’t be given half a chance.

Ultimately, we do not want to compromise anything which Srila Prabhupada gave to us, but we must also be man enough spiritually to acknowledge differing opinions of others, within the framework of vaisnava etiquette. Vigorous healthy debate is a sign of tolerance. Just as in any given country, when the national soccer team does badly, varied opinions will sprout up in the media and cafes. “Sack the coach, some will say. No, fire the administrators say others. Don’t be ridiculous, bring in new players”. These opinions all differ, but the common theme is “we want the best for our team”.

Since we can be encouraged to witness robust debate within our ranks, we must set in motion a friendly blitz, as always, because as we grow in influence, so will there be more incidents of the kind only envious cowards will engage in. Believe me; we are going to need all the help we can – hopefully from our increasing number of friends. Hare Krsna.