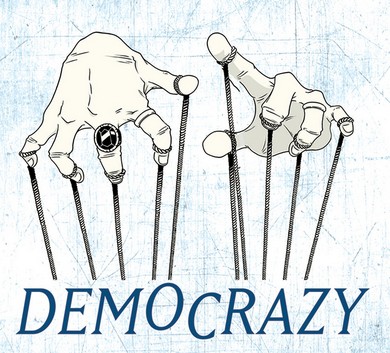 Srila Prabhupada’s keen observation picked out the demon word in pan’demon’ium and demon’strate. He likewise slotted in words befitting his siddhantic stance. Democracy did not escape his scathing, if not light-hearted censure. What could be said about it?

Democracy as we know it is a free for all conciliatory tool to suit the wishes of disparate views within the precincts of law and order. To date, no two nations who espouse and have fully-fledged democratic institutions have gone to war with each other. That it enables the most deadly and despicable foes to talk rapprochement and co-operate for the good of peace and stability, seems a tangible way of curbing bloodthirsty enmity. It seeks to channel the murderous tendency via the political route, where weapons be replaced by oral deliberations, and consensus be put into law.

Much of modern democracy is modeled on the Roman system of governance. The early days of the Roman Empire were awash with liberalism enforced by an efficient military machine. After some time it gave way to dictatorial rule, then a long, bleak period of the dark ages where even slight or inadvertent nonconformity meant cruel punishment, and Biblical statements as ‘thou shalt not suffer a witch to live’ meant torture to those even alleged to be involved in pagan practices. More recently, Hitler rose to power on a democratic ticket only to make the same democracy a capital offence. At present in Europe there is a slow but disturbing resurgence of extremist ideology favored by Hitler. It is clearly noticeable that democracy can foster more extreme agendas. But what are the factors that will determine these outcomes?

Democracy itself will brew them; the very things which Srila Prabhupada observed were demon’ crazy enough to test the limited patience of the average person on the street. Why? Democracy favors the criminals who would shudder at the prospect of a Vedic solution to crime which includes the killing of the six types of aggressors. It allows for a hodge-podge of all manner of thoughts and deeds which breach conservative indigenous traditions. It encourages the TV and film industry to produce increasingly perverse and novel forms of violent and explicit entertainment in line with depraved cravings for it, and emulation of it by gullible minds. What was thought to be horrendous in terms of human conduct in the past is now acceptable behavior, due to the increasing desensitization of most people. The whole framework is propped up by an exploitative paper-thin free-market formation whose life-blood is oil, and the pulse-beats are the stock markets of the world which rally or plunge in tune to the rampaging bull or devouring bear, even a rumor of which can cause recession. These conditions and more will make people to cry out for authoritarian ruler ship to cull the slide into decadence, hence the trend towards more radical solutions volunteered by those colored fiery deep red or chillingly blue on the political scale.

A cynic may justifiably ask; if Srila Prabhupada was scornful of democracy, why on earth did he go to America, the bastion of free liberty? Is this not hypocritical conduct? As with everything Srila Prabhupada did, he utilized all things in Krsna’s service, including democracy. From Lord Chaitanya’s time when stirrings of the renaissance signaled a break from the rigorous monotony of thought, through to the industrialization of the modern era, where much thinking is dictated by scientific or sentimental religious dogma, an air of tolerance prevails, which allows Sri Sri Gaura Nitai’s sankirtana mission to flourish. The unfolding of events in the western world are not accidental occurrences being the result of second guessing by the Lord. They are deliberate motions set to gradually raise the thinking bar from very base to acceptable levels, much like the shift in thought progressing from Buddha, Sankaracarya, Madhvacarya, and Ramanujacarya to Lord Chaitanya. The Lord earmarked the year 1966 as a watershed for acceptance, even 5,000 thousand years ago when He spoke to Mother Yamuna. Srila Prabhupada’s future 10,000 year scenario is not wishful thinking, but a Puranic reality. Srila Bhaktivinoda Thakhur’s revelation of American, Russian devotees, and other nationalities all dancing together with great joy in Mayapur, was a post communist vision all interwoven with the Lord’s disclosure.

What are the virtues of democracy? They are the attributes which ensure freedom to worship Sri Sri Radha and Krsna through the spiritual master without hindrance, and are the cherished ideals put into practice. Yet thousands of other religious denominations also thrive. The followers of those groups reason that God chose this time for them. For example, when the symbol of oppression, the detested Berlin wall crumbled in the face of democratic change in the former Soviet Union, the many converts of those religions took credit; it was their underground endeavors to preach the gospel which caused the fall of communism and the iron curtain, just as the devotees claimed credit for their efforts. Although democracy lets anything resembling a religious front to exist, the devotees can thank their lucky stars that they are able to live their lives in relative peace. The devotees also know that Srila Prabhupada’s and Krsna’s input to secure a brighter future for all through the sankirtana yajna will not fail, and thus supplant the hollow claims of erroneous sub-religious fellowship.

This shared virtue is the Lord’s way of spreading His own mission. Millions of Srila Prabhupada’s books have been distributed, yet many devotees wonder why millions of people are not joining our cause. Some devotees say that a doomsday incident, some widespread war, a terrific natural disaster or the like, may induce the masses to join. Such circumstances would have to cope with a ravaged infrastructure, and logistical difficulties. But the spreading of democracy to nations unwilling to give up religious subjugation of their citizens is well under way. It is interesting to note that this trend is encroaching eastwards towards China and back to the world’s largest democracy, India. The leaders who pursue these democratic aims, perhaps under the guise of religious fervor or covert securing of oil supplies, may well be engaging indirectly in Krsna’s service. Much killing and maiming is done to eliminate diehard opponents of democracy, yet the inexplicable workings of karma can inflict a cruel set of events culminating in a new world order whose aspirations are not entirely different from the Vedic ideal. Srila Prabhupada indicated that world politics in general was moving in this direction.

How does democracy relate to us? Krsna is far more democratic than even the most liberal constitution in the world. With 8,400,000 types of bodies to choose from in which to enjoy the senses, there are no limitations to our God-given scope for freedom. Krsna can also, as Srila Prabhupada said “be the most cruel.” This dark realm of the material world is so unforgiving as we see how the insect, aquatic, beastly species and cruel people mete out their living. Our democratic dispensation began since we first separated ourselves from the Lord as our daily musings between the intelligence and the mind can attest. The mind games take place within the land of the blind. SB.7.5.31 says: “Persons who are strongly entrapped by the consciousness of enjoying material life, and who have therefore accepted as their leader or guru a similar blind man attached to external sense objects, cannot understand that the goal of life is to return home, back to Godhead, and engage in the service of the Lord Vishnu. As blind men guided by another blind man miss the right path and fall into a ditch, materially attached men led by another materially attached man are bound by the ropes of fruitive labor, which are made of very strong cords, and they continue again and again in materialistic life, suffering the threefold miseries.”

Being surrounded by blind people who fumble and crash into their past misdeeds is a fate worse than drinking a cup of plutonium sprinkled with powdered cyanide. Lord Chaitanya says: “Alas, for a person who is seriously desiring to cross the material ocean and engage in the transcendental loving service of the Lord without material motives, seeing a materialist engaged in sense gratification and seeing a woman who is similarly interested is more abominable than drinking poison willingly.” CC. Madhya 11.8. Faced with these more lethal than poison antics afforded by democratic freedom, we have no choice but to take to the only way out as Srila Krsna dasa Kaviraja advises: “In this age of Kali, there are no genuine religious principles. There are only the Vaisnava devotees and the Vaisnava devotional scriptures. This is the sum and substance of everything.” CC. Madhya 9.362.

Living in an increasingly demon’ crazy world, where attempts to unify all suspect scientific theories into a ‘grand unified theory’ GUT are going full steam, a time will come when the big pundits of the day will share a gut feeling that GUT should be confined to the gutter to be swept away in the dust of oblivion. When this happens, the real glory of Kali-yuga will emerge much more quickly as the ‘discovery’ of the presence of consciousness by scientific methods will usher a new humane basis for society. And who else but the devotees who have been at the forefront, combined with an improved aggregate ajnata-sukrti of the general populace who had received and read Srila Prabhupada’s books, will chant in unison to purify the world: “Those who are advanced in knowledge are able to appreciate the essential value of this age of Kali. Such enlightened persons worship Kali-yuga because in this fallen age all perfection of life can easily be achieved by the performance of sankirtana.” SB. 11.5.36.