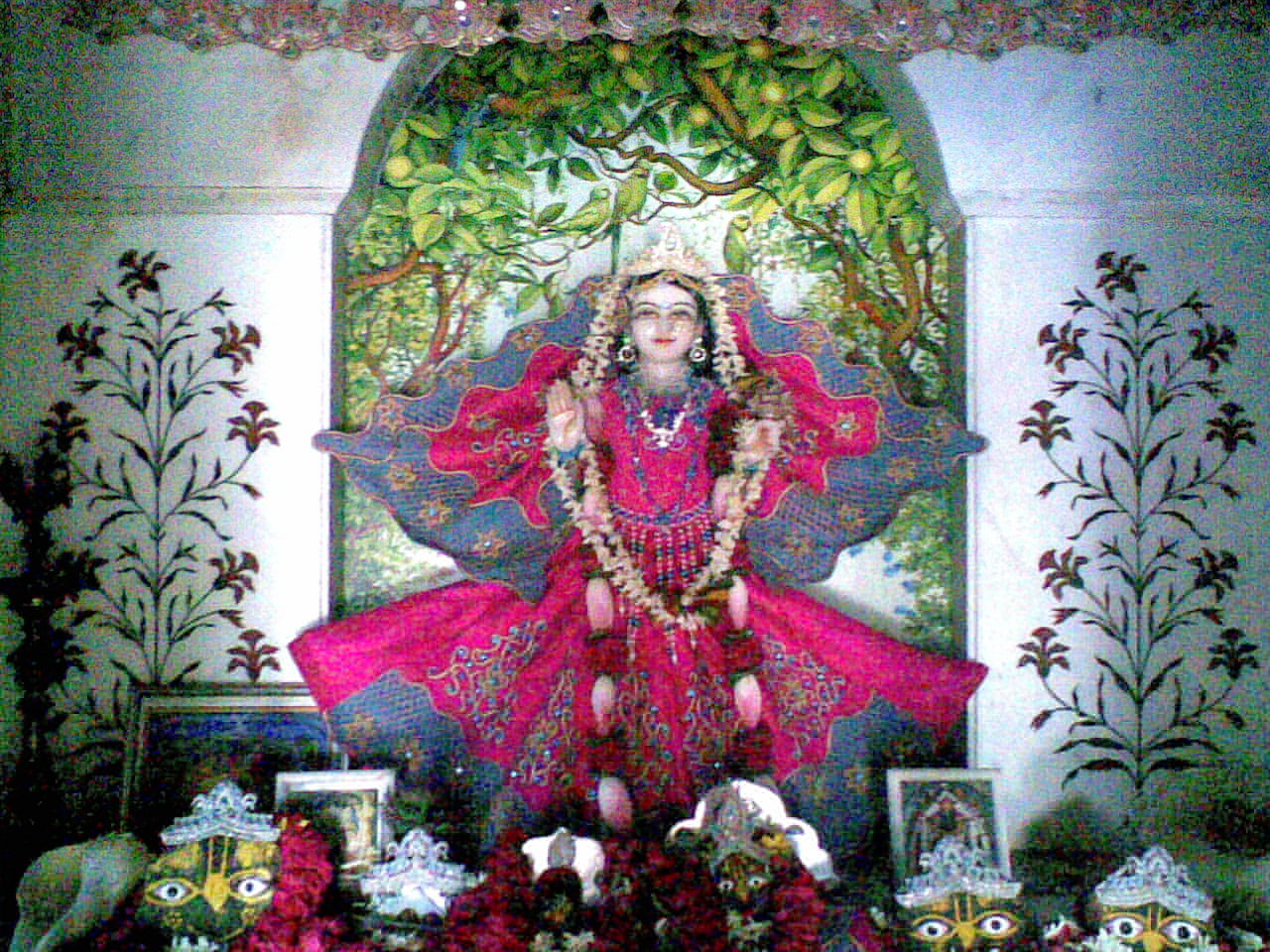 THE APPEARANCE OF TULASI DEVI

Narada Muni asked Lord Narayana, "O Bhagavan! How did the pure, chaste Tulasi Devi become Your wife? Where was she born? Who was she in her previous birth? What family did she come from? And what austerities did she perform to get You as herhusband--You, who are above the material energy, not subject to change, theCosmic Self, the Supreme God, the Lord of all, omniscient, the cause of all,omnipresent, container and preserver of all. And how did Tulasi Devi, Yourchief goddess, become a tree? O You who resolve all doubts, my mind is curiousto know all about these points; therefore, it compels me to ask you thesequestions. Kindly remove these doubts from my mind."

Manu Daksa Savarni was a partial expansion ofLord Visnu. He was extremely virtuous, devoted to the Lord, and very famous forhis good deeds. Daksa Savarni's son, Dharma Savarni, was also extremelyvirtuous. Dharma Savarni's pious son was called Visnu Savarni, and his son, whowas a great Vaisnava, was known as Raja Savarni.
However, Raja Savarni's son, Vrisadhvaja, was fanatically devoted to Lord Siva.Lord Siva lived in Vrisadhvaja's house for three celestial yugas (ages) andloved him more than his own sons. Vrisadhvaja did not revere Lord Narayana,Goddess Laksmi or any of the demigods. He abolished the worship of Laksmi inthe month of Bhadra (Aug., Sept.) and the worship of Saraswati in the month ofMagha (Jan., Feb.). He did not participate in the sacrifice and worshipperformed out of respect for Lord Visnu (Narayana) and criticised them ratherseverely.
The demigods did not curse him because they feared Lord Siva. However, Surya,the sun god, no longer able to restrain his wrath, cursed him: "O King,just as you are completely devoted to Lord Siva and only to Lord Siva, and justas you do not recognise any of the other demigods, I declare that you will nowlose your wealth and prosperity!"
When Lord Siva heard this curse, he became angry. Seizing his trident, he ranafter Lord Surya. Afraid, the sun god went with his father, Kasyapa Muni, toBrahmaloka, the highest material planet, to take shelter of Lord Brahma. ButLord Siva pursued him there. Lord Brahma, also afraid of Lord Siva, took LordSurya and Kasyapa Muni to the region of Vaikuntha, the spiritual or eternalworld. There, with throats parched due to anxiety, they took refuge of LordNarayana, the Lord of all. They offered obeisances to Him and praised Himrepeatedly and finally explained why they were so apprehensive.
Lord Narayana bestowed His mercy on them and granted them the power to befearless. He said, "O fearful ones, be consoled. How can you be afraid ofanyone while I am here? If anyone remembers Me when he is in danger,wherever he may be, I hurry to him with my Sudarsan disc in my hand and savehim. O demigods! I am always the creator, preserver and destroyer of thisuniverse. In the form of Visnu, I am the preserver; in the form of Brahma, thecreator; and in the form of Siva, the destroyer. I am Siva, I am you, and I amSurya. I assume numerous forms and preserve the universe. So go back to yourrespective places. You have nothing to be afraid of. All will be well.
"From this day on, you have nothing to fear from Lord Siva. He is theshelter of the pious, is easily pleased, is the servant and lord of hisdevotees, and is great minded. Lord Siva and the Sudarsana cakra aredearer to Me than My life. In the world of valour, they excel all. Lord Sivacan easily create ten million Suryas and ten million Brahmas. For him, nothingis impossible. He is not conscious of the external world. Meditating on Me, hisheart centred, he is absorbed day and night. From his five faces he repeats Mymantra with devotion, and he always sings My glories. Day and night, I alsoalways think of his welfare. To whatever degree one worships Me, to that degreeI favor one. The nature of Siva is all-auspiciousness."
While Lord Narayana was speaking, Lord Siva arrived. His eyes red, and he wassitting on his bull carrier holding his trident. He dismounted quickly andhumbly offered obeisances with devotion to the Lord of Laksmi, the tranquilSupreme Being. _______________________________________________
Lord Narayana, Visnu, was sitting on His jewel-studded throne. He was decoratedwith a crown, earrings, and a garland, and was holding His disc. His form wasextremely beautiful, and His complexion like a fresh blue rain cloud. Each ofHis attendants had four arms and was fanning Him with four hands. His body wasanointed with sandal paste and He was wearing a yellow garment. Lord Visnu, whoshows kindness to His devotees, was chewing betel nut that had been offered toHim by His wife Laksmi. Smiling, He was watching and listening to the dancingand singing of the Vidyadharis.
After Lord Siva bowed down to Lord Narayana, he bowed to Lord Brahma. LordSurya and Kasyapa Muni respectfully saluted Lord Siva. Then Lord Siva worshipedLord Visnu, the Lord of all, and seated himself on a throne. The attendants ofLord Narayana began to fan Lord Siva with white whisks to relieve him of thefatigue of his journey. Lord Siva, because of being in contact with LordVisnu's virtues, then assumed a cheerful disposition and adored the EternalBeing with his five mouths.
Lord Narayana was highly gratified. With sweet, nectarean words, He said,"O Lord Siva, you are the symbol of all good and welfare. Thus, to askabout your welfare would be foolish. I would ask you only out of respect forthe rules of society and the method prescribed in the Vedas. One who yieldsfruits of devotion and Next Blog