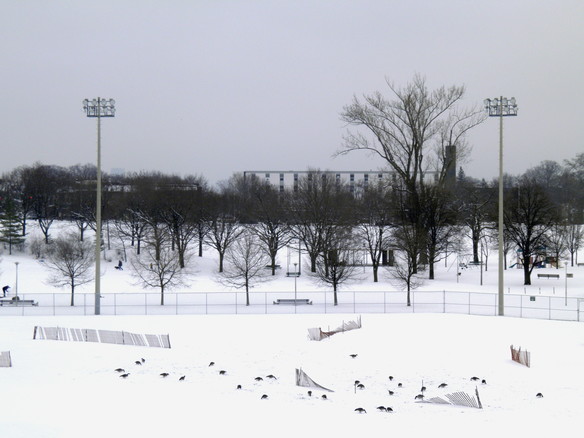 Real snow covered rooftops, car tops, tree branches, roads and everything else. It was white, wet and wonderful. However, it left a slush dynamic; somewhat unfavourable for driving and walking. It was pretty though, as it descended, prettier than Hollywood snow.

I was not discouraged from taking that stroll to The Pits. After all it was late—10 p.m.—who would be out at this hour? Well, there were a few pedestrians. One homeless person recognized me. I was in my snow clothes, so how could he? It must have been my beads, which I keep exposed.

One other fellow, who was standing outside a restaurant where he works, was having his smoke. He also noticed the beads.

“Beads for prayer and meditation. For Covid.”

“I see. I’m Muslim and we have something like that. I use them sometimes. Where are you from?” he asked.

“Here. I’ve lived in Toronto for 49 years. I come from a farm in southern Ontario.”

I was thinking that these days if you hail from the local area, as in “born in Ontario,” you’re almost an alien, or a foreigner, because of all the immigrants.

From this spot where I met the smoker, near Christie Pits, I turned around. I reflected on the weekend’s MANtra Retreat. Best ever. Presenters spoke on Vaishnava Masculinity, Fatherhood, Monkhood—known as brahmacharya—pornography and its destructiveness, men and education, and more. Finally we also premiered our filmed drama, “Rolling the Dice,” and it was so nice. We received positive feedback.