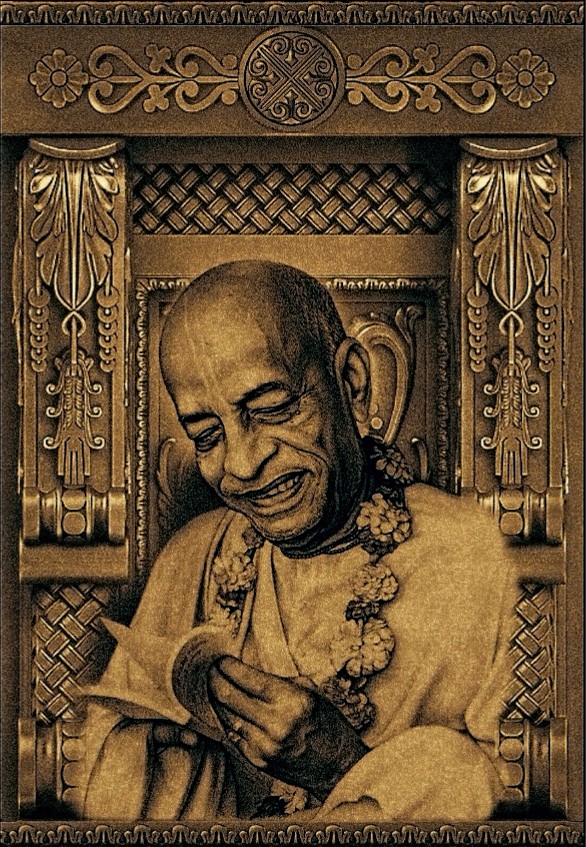 I was doing some work at my home, and I was listening to some Srimad Bhagavatam lectures giving by His Divine Grace Srila Prabhupada. Srila Prabhupada told a humorous story about a rabbit that killed a lion. It was so transcendentally pleasing that I thought I would share this nectar with all the assembled devotees on this world wide web site.

“God’s energies are a variety. All those varieties are grouped into three divisions. Out of the three divisions there are tatastha-shakti, antaranga-shakti and cit-shakti. Tatastha-shakti and this external, or karma-shakti”Triya shakti karma-sanga anya. It is mentioned that the spiritual world is just the manifestation of cit-shakti, and this material world is creation of material energy or karma-sanga, where everyone has to work. Without work, it is said, na hi suptasya simhasya, pravisanti mukhe mrgah. There is a very nice example. In the forest the lion is supposed to be the mightiest animal, and he is sometimes called the king of the animals, pasu-raja. So in one place it is said that even the lion, who is the king of the forest, if he sleeps and he thinks that animals will come and enter in his mouth, that is not possible. He has to also find out how to eat. Na hi suptasya simhasya pravisanti mukhe mrgah. The lion is so powerful, but he cannot also dictate.

So there is another story,

There is a story that a lion was killed by a rabbit. Sasakena nipatitah. Why? Buddhir yasya balam tasya: “One who has got intelligence, he has got power.” A Lion is very mighty, ferocious animal, and a sasaka, an ordinary rabbit, he killed the lion. How? The lion was disturbing all the animals, so all the animals held a meeting and called the lion: “Sir, you do not try to kill us all, hunting after everyone. We shall go voluntarily every day, one of us. So you don’t create disturbance. Let us become peaceful.”

So lion agreed, “All right, if you voluntarily come, I will sleep, and if you enter in my mouth” So this was the agreement.

Then it was the turn for one rabbit. So he planned something. He went to the lion a little late. So lion was very angry that, “Why you have come late? I am very hungry, and you did not come!” (laughter)

So the rabbit said, “Sir, there was a danger on the way.” “What was that?” “There is another lion, and he wanted to kill me and eat, so I protested, “No sir, you cannot kill me. (laughter) I am destined to be killed by such and such lion, so you cannot do it.”

So the lion was very much pleased: “Where is that lion!?” “Please come. I will show you.” So the rabbit took the lion near one well. The rabbit said, “He is living within this.” (laughter)

The lion immediately “Come on! Make a ROOAARR!” So there was vibration, (echo) still higher sound, and he looked down and saw his photo, yes, shadow (reflection). So he thought it, “Yes, there is lion!” He immediately jumped over him. (devotees laugh)

Finished! So how the lion was killed by the rabbit? Buddhir yasya balam tasya: “One who has got intelligence, he has got power.” The foolish, everywhere you will find.

In the society, human society , there must be a class of brahmana, intelligent class. So our Krsna consciousness movement is trying to create a section of the human society – real brahmana, intelligence. And the intelligence means Veda. Veda means knowledge. One who has got sufficient knowledge, he is intelligence, not the fool, rascal. So there are the Vedas and there is the Vedanta. Veda, Vedanta, source of knowledge. So Vedas means knowledge, and Veda-anta. Anta means the last word. That anta knowledge, or the last word in knowledge, is Srimad-Bhagavatam. Vidya bhagavatavadhih, they say. Knowledge, expansion of knowledge, the last word is Srimad-Bhagavatam. So it is the explanation of Vedanta. Bhasyam brahma-sutranam. Vedanta’s, another name is Brahma-sutra. In India there are Mayavadi sannyasis. They advertise themselves as the Vedantists, “One who knows Vedanta.” But actually they do not know Vedanta. Real Vedanta is Srimad Bhagavatam, because this is the commentary. Bhasya ayam brahma-sutranam. Brahma-sutra is Vedanta.

So Vedanta, what is that Vedanta? That is explained by Krsna in the Bhagavad-gita, vedais ca sarvair aham eva vedyam:( Bg. 15.15) “Vedas means to understand Me.” That is Veda. If one does not understand Krsna, his so-called Vedic knowledge or Vedanta knowledge is useless, srama eva hi kevalam, simply labor.”
(Srimad-Bhagavatam class by Srila Prabhupada; 6.1.44 on June 10,1976 Los Angeles)

Tags: story, the rabbit that killed the lion, lecture, udayananda dasa
E-mail me when people leave their comments –
Follow