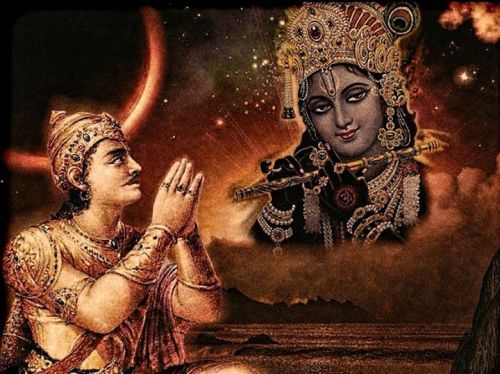 Atheists think that a prayer to God is sheer imagination. But for centuries, thousands of sincere practitioners have accumulated definite evidence of the positive results of prayer. The serious doubt regarding prayer is not whether God can hear and respond, but whether the things people pray for are worthwhile. According to St. Teresa of Avila. “More tears are shed in this world from prayers that are answered than from those that go unanswered.” Those who pray, therefore, need more than the conviction that the Supreme can fulfill our desires. Before we approach God with our requests, we ought to become educated as to what to pray for. The pure devotees of the Lord can teach us this ultimate truth.

One form of popular prayer emphasizes the pragmatic results. These “prayers” are actually nontheistic. As advised by psychologists, a person who believes strongly in his prayer can awaken from within his own subconsciousness huge stores of confidence and power and thus achieve his desired goal. Dale Carnegie, in his books on positive thinking, likes to narrate stories of people like the unsuccessful salesman who in desperation resorted to prayer and the next day was able to convince many customers to buy his vacuum cleaners. In such “prayers” the Personality of Godhead is hardly even acknowledged.

Another shortsighted type of prayer comes from those who believe in God but who are interested not so much in Him as in getting a bit of His opulence. Most prayers fall into this category, as the supplicants request health, riches, family happiness, and so on from a God whom they ask to function as a supreme order supplier. In the Bhagavad-gita, Lord Krishna declares that persons who come to Him asking for material (and therefore temporary) benefits are sukritina, or pious. They are certainly better than those who never approach the Supreme, for although prayers for material benefits are ultimately foolish requests, the sukritinas get into the habit of approaching the Supreme, and thus they may purify themselves for higher communion with God.

An example of a successful sukritina is Dhruva Maharaja, whose prayers are described in the Vedic scripture Srimad-Bhagavatam. Dhruva prayed to God in a spirit of revenge against his parents, and he requested the most opulent kingdom that had ever been awarded to a mortal being. After performing severe austerities. Dhruva gained the audience of Lord Vishnu (a form of Lord Krishna. the Supreme Personality of Godhead). But when the Lord asked Dhruva what he wanted, Dhruva said, “Now that I have seen You, my Lord, I am fully satisfied, and I do not want anything else.”

This should be the goal of all prayer to attain loving service of the Supreme Lord, with no other desire. Lord Caitanya prayed, “I do not want to enjoy beautiful women, nor do I want wealth or many followers. All I want is Your causeless devotional service in my life, birth after birth.”

On hearing a prayer of full surrender and devotion to God, we may think, “That is a beautiful sentiment, but it’s only for the rare pure devotee, the saint” Yet we are all eternal, pure souls, part of the Supreme Lord. Because of the influence of illusion, we have lost our original connection with God and are wandering in the material world, suffering repeated miseries and continuing in illusion. The sincere call to God to be reconciled with His will is not just the practice of a saint; it is indeed the need of all fallen living entities.

When we think that we are independent and don’t really need God, and don’t need to pray, then we are in the most dangerous illusion. Sometimes our illusion is smashed by bitter suffering, or the truth may be revealed to us by association with pure devotees. When this happens we may realize that we are actually tiny, helpless creatures striving to survive but doomed to bodily annihilation. When a conditioned soul realizes his dangerous and fallen position, he deeply wishes to reform. Since all of us, to different degrees, are in the category of “fallen,” we all need to pray to Lord Krishna. But we cannot become reconciled with the Lord unless we receive His special mercy. We may pray, therefore, “My dear Lord, although I am unworthy to receive your special mercy to be relieved of false ego, I beg You to please give me the qualities of love and surrender. Please give Your gift of mercy and relieve me of my impurities. Please reconcile my heart to Yours. If You do not give me Your mercy. I shall be lost.”

True prayer is not mechanical recitation but the sincere cry of the contrite heart. When through prayer one receives even the first inclination of his revived association with Krishna, one wants to call on Him constantly and remain in the soothing shelter of His protection. It is for this reason that Krishna conscious spiritual masters recommend that we chant the holy names of God, especially the Hare Krishna mantra, as often as possible. (Kirtaniya sada harih: “One should always chant the name of Lord Krishna.”) The Hare Krishna mantra is itself a prayer invoking good fortune and petitioning the Lord, “O energy of God, O Supreme Lord, please engage me in Your service.”

Prayers of spontaneous pure devotion may take different forms, such as prayers of petition, praise, adoration, and thanksgiving. Krishna is known as Uttamashloka. which means “one who is praised with beautiful prayers.” The Vedic scriptures contain many excellent prayers, which can be recited by devotees seeking union with the Supreme. At the end of one excellent prayer to Lord Krishna, which is offered in the Srimad-Bhagavatam (4.24.76) by Lord Siva, it is stated, “Although rendering devotional service to the Supreme Personality of Godhead and worshiping Him are very difficult, if one vibrates or simply reads this prayer, he will very easily be able to invoke the mercy of the Supreme Personality of Godhead.” In his commentary to this verse, Srila Prabhupada states. “Any devotee of Lord Krishna can attain all perfection simply by offering prayers to Him.”

One should recite the excellent prayers given in the scriptures, and one should also call upon God with one’s own feelings, thoughts, and words. The child-devotee of Lord Krishna named Prahlada Maharaja realized that the Lord is actually interested only in our devotion. Therefore even if we are unqualified to compose uttamashloka prayers, we can please the Lord if we are sincere. Srila Prabhupada states, “Despite whatever limitations you have, if you express feelingly, ‘My God! My Lord!’ that will be accepted.”

The real purpose of prayer is not to gain material resources or even spiritual salvation for oneself. The power of prayer comes w hen we call to Krishna out of a desire to do His will. Such pure prayers are not means to the end but are themselves loving exchanges between the Lord and His pure devotees. Whether we call on Him from the darkness of our fallen state in the material world, or whether we praise Him in the midst of His liberated associates in the kingdom of God, the pure prayer is the same: “Please engage me in Your service”—Hare Krishna, Hare Krishna, Krishna Krishna , Hare Hare/ Hare Rama, Hare Rama, Rama Rama, Hare Hare.