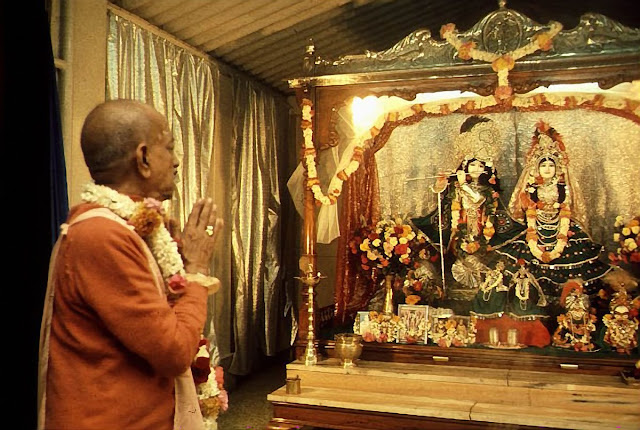 Offering obeisances to the Supreme Lord in His deity form may superficially look like a very small and a simple activity. But, it is one one of the very important and significant aspect of Bhakti. Therefore Lord Krishna stresses the importance of offering obeisances to Him in one of the most important verse of the Bhagvat-gita in chapter 9, verse 34.
"man-manā bhava mad-bhakto
mad-yājī māṁ namaskuru
mām evaiṣyasi yuktvaivam
ātmānaṁ mat-parāyaṇaḥ"
"Engage your mind always in thinking of Me, become My devotee, offer obeisances to Me and worship Me. Being completely absorbed in Me, surely you will come to Me." - Bhagvat-gita 9.34
This verse comes exactly in the middle of Bhagvat-gita making it all the more important. Not only that, this is the only verse that appears almost as it is, again towards the end of the eighteenth chapter of Bhagvat-gita as follows -
"man-manā bhava mad-bhakto
mad-yājī māṁ namaskuru
mām evaiṣyasi satyaṁ te
pratijāne priyo 'si me"
"Always think of Me, become My devotee, worship Me and offer your homage unto Me. Thus you will come to Me without fail. I promise you this because you are My very dear friend." - Bhagvat-gita 18.65
Thus Lord Krishna is doubly emphasising the importance of offering obeisances unto Him.
Rupa Goswami, a great Vaishnava Saint and Scholar of medival times quotes a verse from the Naradiya Purana in his Bhakti treatise called the Bhakti Rasamrita Sindhu, stating the power of offering pranāma or obeisances to Krishna -
"eko 'pi krsnāya krtah pramāno
dasāsvamedhāvabhrthair na tulyah
dasāsvamedhi punar eti janma
krsna-pranāmi na punar-bhavaya"
"The purificatory rites performed during ten horse sacrifices cannot equal even one pranāma offered to Krishna. A person who performs ten horse sacrifices takes birth again. The person offering pranāmas to Krishna does not take birth again."
This is the power of even offering one obeisance to Krishna. "krsna-pranāmi na punar-bhavaya" - "such a person does not take birth again". What to speak of one who offers obeisances to the Lord on a daily basis and that too with devotion.
By offering obeisances in front of the deity of the Lord with our head touching the ground, we are in essence offering our ego at His lotus feet. A proud person who always walks with his head high, thinking high about himself cannot do this simple act of devotion. When done with feeling and devotion, this simple act of offering obeisances to Krishna can be a profound experience to our soul. The feeling we can derive from this humble and simple act is far more significant than the feeling of accomplishing a great and a herculean task. The process and the limbs of Bhakti may appear simple but they are very powerful and sublime. We should be careful not to get fooled by the apparent simplicity of the process.
Therefore great devotees of the Lord perform this aspect of Bhakti with great faith. One of the best examples of a devotee who had great faith in this aspect and who would perform it religiously was the most famous renounciate devotee of Lord Chaitanya, Raghunatha das Goswami. When Raghunatha das Goswami was living in Vrindavan, he would bow down a minimum of one thousand times every day to the Supreme Personality of Godhead and a minimum of two thousand times every day to the devotees of the Lord. This was his strict rule for offering obeisances along with following all the other aspects of Bhakti.
We may not be able to follow the example of Raghunatha das Goswami as it is but we can definitely try to follow his spirit and develop the kind of faith he had in this simple aspect of Bhakti. Let us not therefore shy away from or be lazy in offering obeisances to the Lord and His devotees with our body, mind and heart whenever we get a chance, knowing that such chances are very rare and that such chances are the greatest chances for us advance in spiritual life and get out of this temporary, material tabernacle.