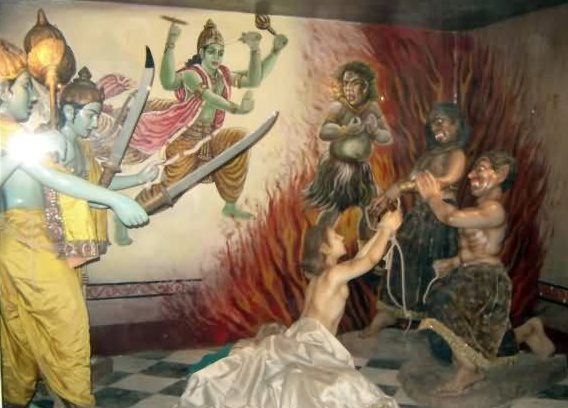 I heard a wonderful talk in which Srila Prabhupada—and Srimad-Bhagavatam—glorified the chanting of the holy names. I was present when Srila Prabhupada gave the talk at the Ardha-kumbha-mela in Allahabad on January 31, 1971.

Srila Prabhupada said, “The conclusion is:

na vai sa narakam yati
neksito yama-kinkaraih
yady apy amangalo martyo
visnu-loke mahiyate
[SB 6.2.48] [‘Because this very confidential historical narration has the potency to vanquish all sinful reactions, one who hears or describes it with faith and devotion is no longer doomed to hellish life, regardless of his having a material body and regardless of how sinful he may have been. Indeed, the Yamadutas, who carry out the orders of Yamaraja, do not approach him even to see him. After giving up his body, he returns home, back to Godhead, where he is very respectfully received and worshiped.’] One who is engaged in chanting the holy name—for him this is the special facility. What is that? It is guaranteed that he’ll never go to the hellish condition of life. That is guaranteed. He will not be degraded to the lowest stages of life, animal life or a life of ignorance in a lowborn of human life, but he will gradually make progress. And it is also guaranteed that the Yamadutas, the servants of Yamaraja, will never come to see him, or he will never see them. They will be out of sight. This is the result. And yajnati ananyalo mattah: although this material existence is always inauspicious, a person engaged in chanting the holy names always lives in the Vishnu-loka. He’s not in this material world. If you chant without offense, yatra ananyalo mad-bhakta tatra tisthami, immediately you create a Vaikuntha-loka, because Krishna comes.”

Here Srila Prabhupada was referring to a verse in the Padma Purana:

“My dear Narada, I do not dwell in Vaikuntha or in the hearts of the yogis; I remain wherever My devotees sing My glories.”

“When Krishna comes, Vishnu comes,” Prabhupada continued. “Wherever Krishna goes, that is Vaikuntha. . . . There is no difference between the holy name and Krishna. And Krishna says, ‘I live there where My pure devotees are chanting.’ So, when Krishna comes, when Krishna is on your tongue, how you can live in this material world? It is already Vaikuntha, provided your chanting is offenseless.

mriyamano harer nama
grnan putropacaritam
ajamilo ’py agad dhama
kim uta sraddhaya grnan
[SB 6.2.49] [‘While suffering at the time of death, Ajamila chanted the holy name of the Lord, and although the chanting was directed toward his son, he nevertheless returned home, back to Godhead. Therefore if one faithfully and inoffensively chants the holy name of the Lord, where is the doubt that he will return to Godhead?’] This is the last conclusion, that Ajamila actually did not mean to chant the holy name of the Supreme Personality of Godhead, but some way or other his son’s name was Narayana, and he called his son. The name is so powerful that even without aiming or intending to address the Supreme Personality of Godhead, because the name was there, therefore ajamilo ’py agad dhamam: he was promoted to the spiritual kingdom. Kim uta sraddhaya grnan: then what to speak of such persons who are actually trying to chant the holy name without any offense.

“Ajamila never meant to chant the name of Narayana actually, but he was calling his son, whose name was Narayana. That means it was almost neglectfully done. So, even when neglectfully chanted, the holy name has got so much power, and what to speak of when those who are very faithfully chanting, observing the rules and regulations without any offense—what to speak of them? That is the thing.

“A similar instance is there in the Nrsimha Purana: a boar attacked a mlechchha, a lowborn meat-eater. They hate the hog. They call it haram. Haram means ‘abominable.’ So, one boar attacked him, and while he was dying he called this abominable, ‘haram, haram’; ha rama means ‘O Rama.’ So although he did not mean it, it became ‘O Rama,’ and he was immediately promoted to the spiritual kingdom. So, that is the power of chanting the Hare Krishna mantra.”