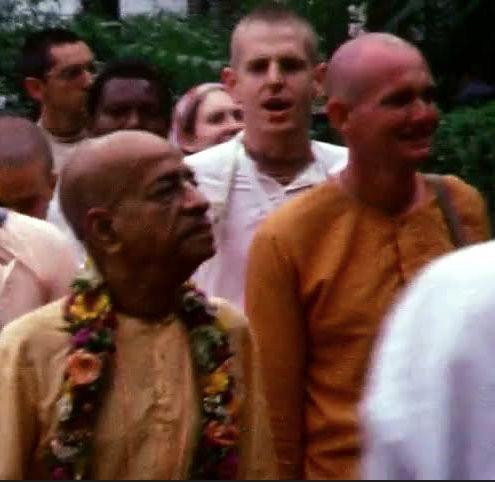 Hare Krsna, dandavat pranams to the World Vaisnava community, all glories to our Divine Master, Srila Prabhupada. It is with a heavy-laden heart that we inform the sudden passing of Pita Das prabhu on Wednesday October 7th of this year 2021. He passed away peacefully in his sleep.

For those who knew and loved Pita it is a great loss for us and certainly the world at large. Why is the passing of Pita prabhu such a great loss for all? Well, it is difficult to begin extolling his glories, there are so many! Pita prabhu was a great devotee, friendly to all, amicable, compassionate, helpful, very honest, funny, a true Southern gentleman, but most of all his highest virtue is that he loved and served Srila Prabhupada with all his heart and soul! Certainly, people of his caliber, whether devotees or not, have risen above the grade of varna shankara, unwanted population.

I met Pita prabhu nearly twenty years ago at the Atlanta temple. He was returning from China where he served under the auspices of His Holiness, Tamal Krsna Gosvami. He spent over two decades there and learned to speak Chinese fluently. Pita related to me many personal pastimes about his service in China, particularly about his enthusiastic preaching. He learned to cook Chinese food expertly and loved to cook for the devotees. Pita was a brahmacari and he related how one day he was shopping at the market and saw the most attractive beautiful young girl he had ever seen, however, as he observed her, he noticed that she was eating fried tiny little birds. We all know how difficult it is to control the senses, just as Arjuna conveyed to Krsna, but that grotesque experience solidified his vow of celibacy (brahmacarya).

Pita prabhu and I became close friends. So, I got to know him very well and easily perceived his kind and loving nature. Truly he liked everyone and never uttered a single negative thing about anyone. He praised the service of other devotees, and sincerely appreciated their association. Simply ask anyone who knew him, everybody liked Pita!

Above all, I personally witnessed his worship of Salagram Sila, ringing the bell, offering puja, chanting intricate mantras like the South Indian brahmins. This worship he performed daily for over a decade without missing a beat. I watched him chant his rounds in deep meditation and offer prayers to Srila Prabhupada. Yes, Pita loved Prabhupada immensely!

Becoming his close friend, Pita took liberty and trust to share with me many anecdotes of his childhood and upbringing as a Roman Catholic. He told me once that several years after joining ISKCON he returned home to visit his parents. He was preaching to his mother about Krsna consciousness and told her that Krsna was blue, and heartily his mother replied, “Really, Krsna is blue? Then He must have a heart condition!” And then he told me about his Dad, who was a salesman who sold cemetery lots. Pita told me that all the kids in the family learned their Dad’s pitch on the phone to customers, and he would imitate it in a funny voice. Many of the things I’m saying may sound mundane, but in actuality hearing his Dad solicit on behalf of imminent death, he said, it planted a seed in his heart to seek out God.

Most importantly, Pita described to me how he came to Krsna consciousness. He met the devotees in Philadelphia and would frequently visit the temple with his karmi friends. His friends displayed little interest in the philosophy, conversely, Pita was fascinated with Krsna consciousness from the very start! Soon he joined the temple and was assigned to traveling sankirtan with the Radha Damodar bus party. There his fortune began, for the Radha Damodhar bus party was headed to Atlanta, Georgia to meet with Srila Prabhupada!

Srila Prabhupada’s visit to Atlanta was superlatively glorious! The BBT Airport party was there,Tripurari and his men, all the stalwart book distributors, like Carudesna prabhu, Balabhadra Bhattacarya, Praghosh, Budhimanta, Svabas, Vaisesika, Sura prabhu Darpada prabhu and his good wife, Danakeli, Mother Svaha, my humble self and other dedicated soldiers (too many to name) who were fighting Maya in hand-to-hand combat in the Sankirtan army of Lord Caitanya Mahprabhu. And of course, the Radha Damodara bus party was there as well.

At the request of H.H. Tamal Krsna Gosvami, permission was given for all the book distributors to come and be introduced to Srila Prabhupada. Gosvami introduced everyone one at a time. He asked, “Who wants to go see Prabhupada first?” Everyone was reluctant and no one dare come forward, but Pita boldly volunteered and enthusiastically exclaimed “ I’ll go first.” “Srila Prabhupada, this is Bhakta Glenn.” Gosvami said, to which Srila Prabhupada swiftly made an impressive motion with his arm and slowly replied: “Glenn, Glenn, Glenn.” Not once, not twice, but three times!” Mercy, Mercy, Mercy, for Pita Das Prabhu.

Prior to Pita prabhu embarking for his service in China, he served at the F.A.T.E.Museum in New Dwarka, Los Angeles. His service was to paint the different sculptured dioramas, like the changing body exhibit. Again, Pita prabhu was fortunate to receive Srila Prabhupada’s association when Prabhupada came to inspect the facility. Srila Prabhupada went on his morning walks at Venice Beach, Pita attended several of those walks, and as you can see in the above photo (next to Prabhupada’s left in saffron ) he was beaming with happiness while basking in sun of Srila Prabhupada’s effulgence.

What more can I say about the glories of Pita Das prabhu? So much more I can share, but suffice it to say, that Pita prabhu loved Srila Prabhupada and the devotees and was firmly fixed in his conviction that Krsna consciousness was simply sublime. Indubitably, no questions asked, our beloved Pita prabhu is eternally situated at the lotus feet of our spiritual master, Srila Prabhupada!