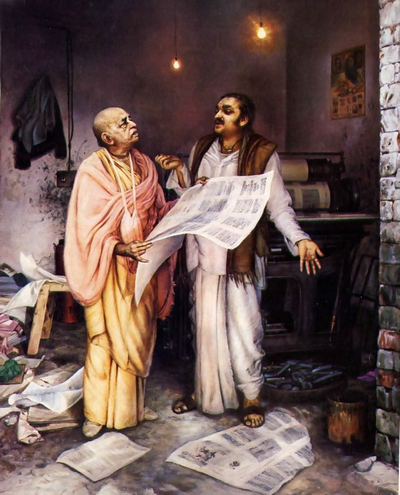 Recently, I was distributing at Orange Coast College, and a student came to the table and showed an interest in getting Bhagavad-gita. I explained it to him a little. Then he opened it, to see what he could get out of it. He opened it to text 4.22: “He who is satisfied with gains that comes of its own accord, who is free from duality and does not envy, who is steady in both success and failure, is never entangled, although performing actions.” When he read that he said, “All right, I’ll take it.” Krsna is the wisest, and intelligent people appreciate His words of wisdom.

A couple of days before that, a Buddhist monk from Cambodia came to the table. I showed him the Gita, and he appreciated it. I said to him that Buddha used to read it. I told him, “I’m also a monk, and we just ask for donations for the Gita. He said, “I’m happy to donate.” He gave twenty dollars.

Then a young lady came and said, “Just an hour ago, my professor mentioned the Gita in class as a great classic of the East. I said, “That’s true, but it is much more than that, and you’ll get so much out of it by reading it. It’s not by chance that he just mentioned it in class, and now I’m offering it to you.” She said, “Yes, I’d love to read it.”