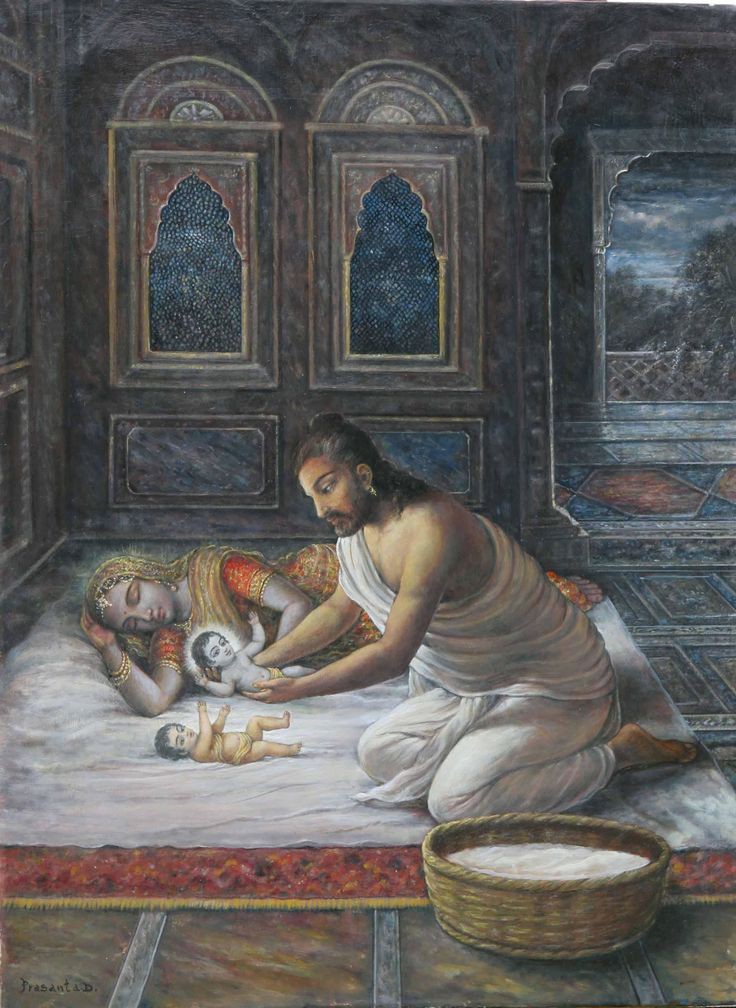 Many residents of Mathura believe that Lord Krishna appeared in Mathura, but the residents of Vrindavan know that He was born in Vraja, in Gokula. Yet Srimad-Bhagavatam states that Lord Krishna appeared in the prison house of Kamsa in Mathura as the son of Vasudeva and Devaki and thereafter was carried by Vasudeva to Gokula to be taken as their son by Nanda and Yasoda, in exchange for Yasoda’s newborn daughter, Yogamaya. So, how to solve this mystery?

“The jata-karma ceremony can take place when the umbilical cord, connecting the child and the placenta, is cut. However, since Krsna was brought by Vasudeva to the house of Nanda Maharaja, where was the chance for this to happen? Here Srila Visvanatha Cakravarti Thakura and other authorities cite evidence from various sastras that Krsna actually took birth as the son of Yasoda before the birth of Yogamaya, who is therefore described as the Lord’s younger sister.” (SB 10.5.1–2 purport)

Yogamaya is described as adrsyatanuja visnoh, “the younger sister of Lord Visnu.” (SB 10.4.9) As Yogamaya was born from Yasoda in Vraja, so Lord Krishna must have been, too. Therefore Srila Prabhupada comments that “When Visnu, or Krsna, took birth from Devaki in Mathura, He must have simultaneously taken birth from Yasoda in Vraja also. Otherwise how could Yogamaya have been anuja,the Lord’s younger sister?”

The Vishnu who appeared in Mathura is Vasudeva Krishna, fully grown, with four hands and long hair and many ornaments and symbols of Vishnu. The Krishna who took birth in Vraja is the original Krishna with two hands. When Vasudeva and Devaki prayed to Vishnu as the Supreme Personality of Godhead to become like a human baby and Vasudeva carried him across the Yamuna River to Vrindavan, the original Krishna absorbed the Vasudeva Krishna into Himself. Later, when Kamsa tried to kill Yogamaya, she slipped upward, assumed the form of the goddess Durga, and clearly told him, “The Supreme Personality of Godhead, who has been your enemy from the very beginning and will certainly kill you, has already taken His birth somewhere else.” (SB 10.4.12)

Further evidence that Krishna took birth in Vraja comes later in the Tenth Canto in the “Songs of the Gopis,” where Sukadeva Gosvami completely forgets himself. Sukadeva Gosvami wanted to encourage Maharaja Pariksit that Krishna was the son of Vasudeva, because Vasudeva was Kunti’s brother and Kunti was Arjuna’s mother and Pariksit’s great-grandmother. Thus, to please Maharaja Pariksit, Sukadeva Gosvami tried to suppress the fact that Krishna actually took birth as the son of Yasoda in Vraja. But in the ecstasy of the gopis in separation from Krishna, he forgot himself and cried, jayati te ’dhikam janmana vrajah: “O beloved Krsna, Your birth in the land of Vraja has made it exceedingly glorious, and thus Indira, the goddess of fortune, always resides here. It is only for Your sake that we, Your devoted servants, maintain our lives. We have been searching everywhere for You, so please show Yourself to us.” (SB 10.31.1) Thus the truth came out. By closely studying the texts of Srimad-Bhagavatam under the guidance of Srila Prabhupada and other acharyas, the mystery is solved.

Lord Brahma, the first guru in the disciplic succession, confirms what the other authorities have stated. In his prayers to Lord Krishna he addresses Him as the son of the king of the cowherds (pasupangajaya), the son of Maharaja Nanda: “O son of the king of the cowherds, Your transcendental body is dark blue like a new cloud, Your garment is brilliant like lightning, and the beauty of Your face is enhanced by Your gunjaearrings and the peacock feather on Your head.” (SB 10.14.1)

In any case, we should never think that Lord Krishna was conceived or born like an ordinary human being. He is always transcendental and supreme, and He manifests Himself by His internal potency. Because He wanted to appear like a cowherd boy, His internal potency arranged His apparent birth in Vraja. Otherwise the Lord is unborn and eternal, with no beginning and no end. But just as Brahma is described as the father of Varahadeva since Lord Krishna appeared as Varaha from the nostril of Lord Brahma, so Nanda and Yasoda are known to be the father and mother of Krishna when He appears in His original form in Vraja.

In conclusion, we cite one verse from the Bhakti-rasamrta-sindhu:

“Lord Krsna is perfect in Dvaraka, more perfect in Mathura, and most perfect in Vrndavana.” (Brs 2.1.223) And so we prefer to worship Krishna in Vrindavan, from beginning to end.