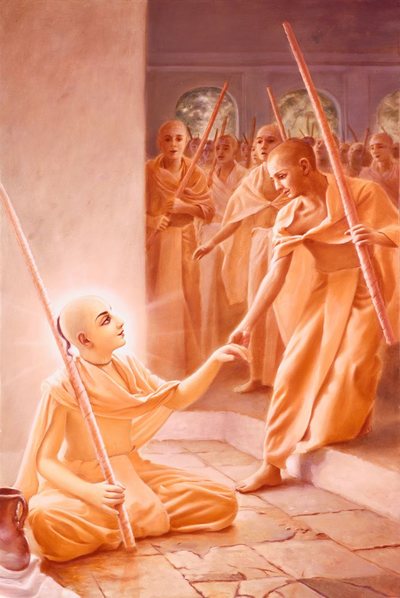 For a person in the renounced phase of life it is good to move – as the saying goes: A rolling stone doesn’t gather any moss… After all, we are not meant to get too comfy, homey and cozy. It feels good to move on as soon as one gets too comfortable and settled. Then it may be time to pack up the suitcase and say farewell…

“Thus a pure devotee of the Lord is aniketatam, without a fixed residence, meaning that he accepts neither the gross nor subtle body as his eternal residence. Since one’s so-called home and family are expansions of his body, such material creations are also not to be considered one’s actual residence. […] Thus a devotee should understand that his eternal residence is fixed in the dust of the lotus feet of the Supreme Personality of Godhead. […] A pure devotee may travel all over the world distributing Krishna consciousness, but he should never consider any material place to be his actual residence. One who has become mature in this understanding may take the tridanda-sannyasa order of life under the direct shelter of the Lord.”

A renunciate also cultivates a certain mood and attitude in regards to eating, which is explained in the verses of the SB. 11.8.2 & 3:

“Following the example of the python, one should give up material endeavors and accept for one’s maintenance food that comes of its own accord, whether such food be delicious or tasteless, ample or meager. If at any time food does not come, then a saintly person should fast for many days without making endeavor. He should understand that by God’s arrangement he must fast. Thus, following the example of the python, he should remain peaceful and patient.”

The tongue is most voracious and always demands some gratification and enjoyment. A person in the renounced phase of life is meant to control the urges of the tongue and develop a higher taste, where eating is not any longer a prominent source of pleasure in life. This point is strongly expressed in the verses of CC Antya. 6.225 to 227:

“If a renunciant is eager for his tongue to taste different foods, his spiritual life will be lost, and he will be subservient to the tastes of his tongue. The duty of a person in the renounced order is to chant the Hare Krishna mantra always. He should satisfy his belly with whatever vegetables, leaves, fruits and roots are available. One who is subservient to the tongue and who thus goes here and there, devoted to the genitals and the belly, cannot attain Krishna.”

A very nice and practical explanation is found in the verse of the SB. 11.8.11:

“A saintly person should not think, “This food I will keep to eat tonight and this other food I can save for tomorrow.” In other words, a saintly person should not store foodstuffs acquired by begging. Rather, he should use his own hands as his plate and eat whatever fits on them. His only storage container should be his belly, and whatever conveniently fits into his belly should be his stock of food. Thus one should not imitate the greedy honeybee, who eagerly collects more and more honey.”

In this regard, I remember being in a Maharaja’s room around 25 years ago when he was visiting Riga/Latvia. He was just about to close his suitcase to leave for his next destination, when a devotee came to offer him a jar with home-made jam. Maharaja burst out laughing, exclaiming: “What am I going to do with that?! How can I take that along with me? If devotees see that I am traveling with a jar of jam, they may wonder: What kind of Sannyasi is he?!”

It is indeed cumbersome to travel with so many bags of prasadam and bhoga – as if there will not be anything to eat in the next place. And it may reflect a mindset inappropriate for the renounced phase in life.

Another important aspect of the renounced phase in life is expressed in CC Antya, 6.225:

“A vairagi [a person in the renounced order] should not depend on others. If he does so, he will be unsuccessful, and he will be neglected by Krishna.”

Gurudas Prabhu (or is it Srutakirti Prabhu?) tells the story where Srila Prabhupada is at Radha Damodara Mandir in Vrindavan, together with a group of his disciples. Srila Prabhupada cleaned the floor in his own room, going down on his knees, saying: “Never depend on others…!”

When allowing oneself to depend too much on others one may easily lose one’s brahminical aloofness and may compromise, not being able to say or do what needs to be said or done. One may even become subjected to manipulation, agreeing to unacceptable circumstances because of external dependence. In this way, a renunciate may not be able to act for the ultimate spiritual benefit of others around him. We are meant to deepen our dependence on the Lord. Internally we may cultivate our dependence on the Vaishnavas, but not in an external sense.

As one’s Krishna consciousness matures, one is firmly established in eternal reality, which is described in the verse of SB 10.14.22:

“One who accepts the kingdom of God as home, the Lord Himself as the object of love, and the material universe as paraphernalia for being engaged in the Lord’s service dwells within eternal reality wherever he may go within the material and spiritual worlds.”