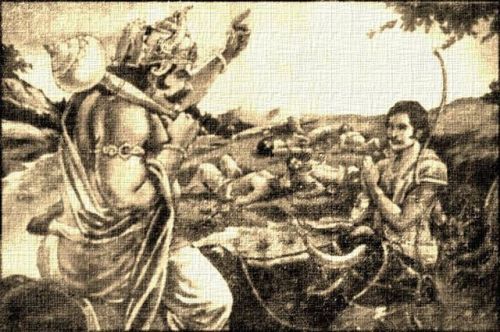 Just after the 12 years of exile of the Pandavas was completed, they were considering where to spend the remaining 1 year incognito. While still in the forest, a brahmana came to them and reported that the sticks which he used for igniting his sacrificial fire had somehow gotten entangled in the antlers of a deer, and the sticks were now gone. The sage asked the Pandavas to see if they could possibly return the sticks. In a search for that deer, a very unusual event took place. They could not find the deer, but instead became overwhelmed with thirst (much like what happened to Maharaja Pariksit). A distant lake was spotted, and one-by-one the Pandavas went to quench their thirst and died instantly when they drank from the lake, not heeding the warning of a crane to first answer his questions before they drank. When Yudhisthira came to the lake, he was stunned seeing his dead brothers lying by the side of the lake.

Tags: the lake of death, story, mahabharata
E-mail me when people leave their comments –
Follow