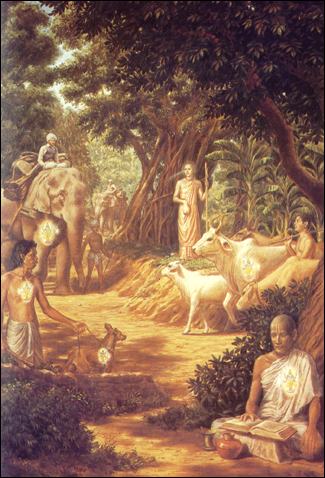 An enlightened person sees with equal vision a learned scholar,
a cow, an elephant, a dog, and a dog-eater.

Attempts to establish equality among all people are naive and superficial unless supported by spiritual understanding. Materially, we are not equal. Some people are geniuses; others are fools. Materially, the rule is not unity but diversity. Ours is a world of diverse bodies, diverse faces.

Within the limits of our categories, we strive for unity. Americans United. Women United. Workers United. And those who are broadminded seek to go beyond the small and petty and reach out to a greater oneness, the oneness of all humanity.

Yet even this human oneness is limited. It is but a larger "in" group, from which other living beings animals and plants, for example are excluded.

Spiritual realization, therefore, begins with awakening from one's bodily false ego to one's real identity as the spiritual soul within the body. This spiritual insight gives one the enlightened vision with which to see other living beings in their true identities also.

The enlightened person no longer sees other beings in terms of their temporary, material coverings. He no longer thinks in superficial stereotypes and designations. Rather, he sees everyone to be a spiritual spark of consciousness, in quality one with himself.

Consciousness is the same everywhere. It always has the same qualities the qualities of perception, of understanding, of desire regardless of the body in which it appears. A Russian may think or feel himself different from an American, but the essential nature of their thoughts and feelings is the same. As light is of one quality although it appears different when it shines through glass of varied colors, consciousness is the same in all living beings, although it manifests itself differently because of the varied bodies in which it dwells. This consciousness within the body is the real self.

A Krsna conscious person. therefore, gives more importance to the self within and less to the outward body. So although he recognizes material variety, he understands the unity behind it.

According to Bhagavad-gita the basic book of knowledge for Krsna consciousness, a self-realized person sees all living beings equally. In India, the highest men among the social classes are the brahmanas, or those whose intellect is sharp and refined, whereas the lowest of men are those whose habits are unclean and who live by eating dogs. But although not blind to the outward differences between the brahmana and the dog-eater, a Krsna conscious person sees that both are essentially the same, because each of them is a spiritual soul, an embodied spark of consciousness.

The Krsna conscious person sees with this spiritual vision not only other human beings but also the lower species of life. In India, cows are loved and respected as the most valuable animals, whereas dogs are thought low and nasty. In the West, our sentiments are nearly the opposite; while raising cows for slaughter. we value dogs as our companions and lavish our affections upon them. A Krsna conscious person, however, sees no difference between a cow and a dog and an elephant or any other creature, because he sees each of them as a tiny embodied spiritual soul. Again, the bodies differ, yet the spark of consciousness in each body is the same.

A Krsna conscious person, therefore, has a perfect vision of material diversity and spiritual unity at the same time. He is not foolish and impractical, awkwardly straining to see all creatures as one in all respects. He recognizes diversity. We embrace our fellow human beings, but we don't embrace a tiger. Why? Because we know the differences between the tiger and the man. Our human friends shake hands with us; a tiger greets us with its jaws. Nonetheless, spiritually we see that the man and the tiger are one, because an equally spiritual soul resides within them both.

Yet although the Krsna consciousness person sees beyond the material body, he even sees beyond the soul within. For the Krsna conscious person is ultimately conscious of Krsna, the supreme reservoir of all consciousness. He sees Krsna to be present within the heart of every living being. Within each body resides an individual spark of consciousness, an individual living entity but that consciousness dwells in one body, and only one body, at any one time. Thus I am conscious of the pains and pleasures of my body but not of yours, whereas you are conscious of yours but not mine. Krsna, however, lives simultaneously in the hearts of all living beings. He is present within the heart of the intellectual and the dog-eater, the elephant, the cow, and the dog. It is from Krsna that each living being ultimately draws his life, and because of Him that one remembers or forgets. It is He who guides each living being toward spiritual perfection or away from it, according to what each of us desires. He is therefore the ultimate fountainhead of all life, all consciousness, and all spiritual and material energy. He is the source of everything, the ultimate truth.

This spiritual vision is not abstract or theoretical. As one advances in realization, one's vision becomes purified, and this spiritual vision becomes a natural part of his life. A businessman, because of his financial consciousness, sees money everywhere. A man intent upon sexual fulfillment sees everywhere some opportunity for sex. These are crude examples, but similarly a Krsna conscious person, one whose consciousness is focused upon Krsna, becomes eligible to see Krsna everywhere. And because he sees Krsna everywhere, he sees within Krsna the true equality of all living beings.