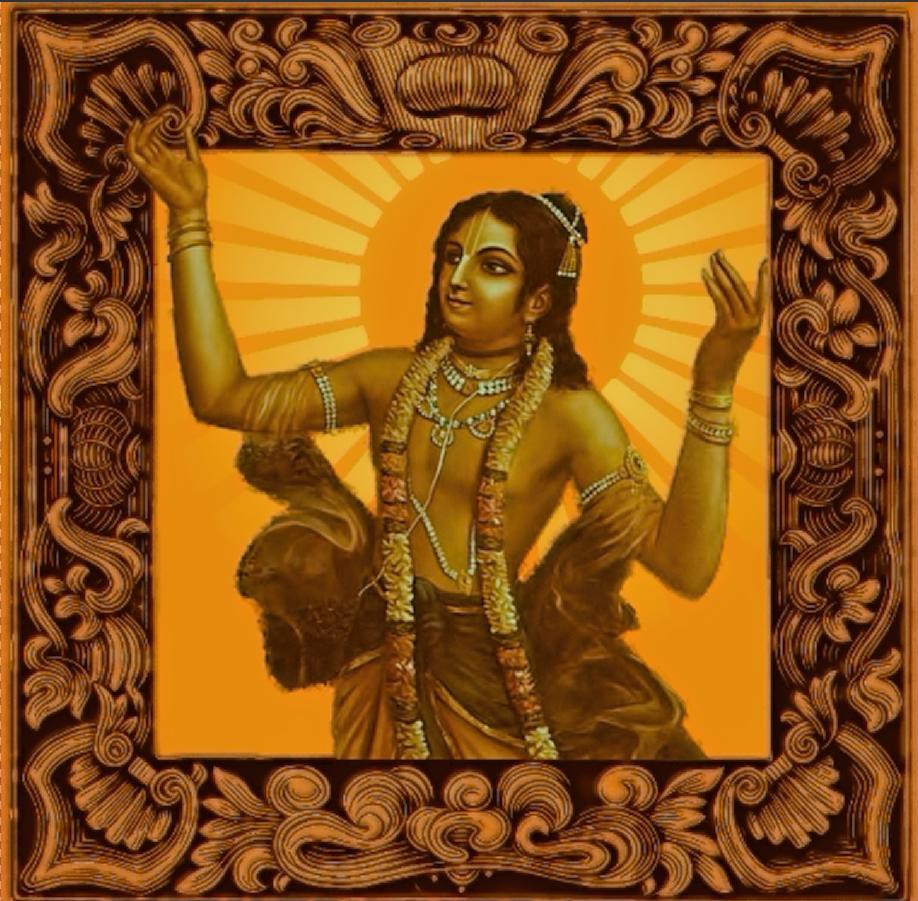 Kali yuga, the age of quarrel and hypocrisy is drowning in irreligion and atheistic lifestyles. And so in this age, Krishna was predicted to decent as the Golden Avatar (incarnation) – Sri Chaitanya Mahaprabhu and establish the Yuga Dharma of Harinaam Sankirtan – Congregational devotional chanting (prescribed method of liberation according to the current age).

Who is The Golden Avatar?
Sri Chaitanya is a direct avatar of Sri Krishna Bhagavan in the mood of His greatest devotee and consort, Srimati Radharani. Sri Chaitanya started the Nama Sankirtan movement and gave the world the divine and powerful Hare Krishna Maha Mantra that one must chant to become self realised and to attain the lotus feet of Sri Krishna. This is the easiest way to reach Krishna in this age of Kali!
The Holy Names of the Lord are:
Hare Krishna Hare Krishna Krishna Krishna Hare Hare
Hare Rama Hare Rama Rama Rama Hare Hare
His Appearance.
Sri Caitanya Mahaprabhu appeared in 1486 in Navadvipa, Mayapur in West Bengal to Jagannatha Misra and Sacidevi. He was named Vishvambhara (support of the universe) and nicknamed Nimai, as He had been born under a neem tree. His appearance was accompanied by widespread chanting of ‘Hari Hari’ and as a child, the only way His parents could get Him to stop crying was by chanting the holy names of the Lord. Therefore, from the beginning, He induced people to chant the names of God. His birth chart was so auspicious that the child was declared as the Supreme Lord, Narayana Himself. It was predicted that He would have extraordinary qualities and would deliver the people of the world with even atheists worshipping him at his feet. 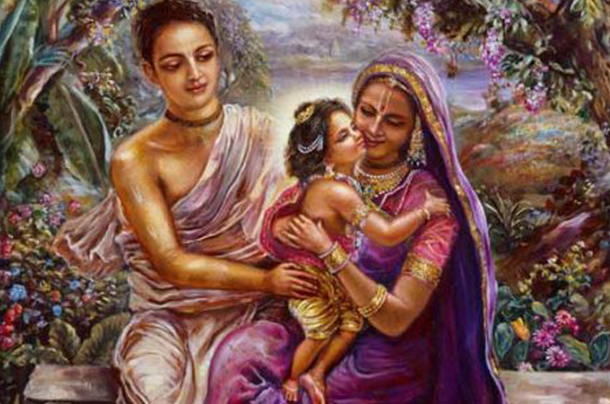 Gaura Purnima is the festival which celebrates Sri Chaitanya’s appearance. It means “Golden Full Moon”. His devotees spend this festival fasting and chanting the holy names. At moonrise a sumptuous vegetarian feast is offered to the Lord and then enjoyed by all.
The Golden Avatar
In different ages there are different methods for self-realisation such as meditation, temple worship and various yoga practices to control the body and mind. We are currently in Kali-yuga, which is considered the worst age out of the four, (Satya, Treta, Dwarpa and Kali) as the people of Kali-yug are prone to quarrels, hypocrisy and have a lack of God consciousness. However the all-auspicious appearance of Sri Chaitanya Mahaprabhu makes this age more beneficial than the others by His grace and causeless mercy. The prescribed method of liberation has been made easier by simply chanting the Hare Krishna Mahamantra! And so Kali-yuga is also called the golden age of Sri Chaitanya.
How do we know he is an Avatar?
There is multiple evidence in authoritative scriptures of Sri Chaitanya’s appearance. Here are some examples.
Prediction of His actual time of incarnation is stated In the Kurma-Purana:
The Supreme Person will appear in the first part of the age of Kali. He will appear in the home of a Brahmana, to save the embodied conditioned souls burning in the troubles of Kali-Yuga.


In the Padma-Purana, it is written:
The Supreme Personality, Janardana, who is the object of the yogis’ meditation, who saves the devotees from various sufferings, and who is the master of all yogic practices, who is always full of divine transcendental ecstasy and bliss, will advent in His own divine form of Sri Chaitanya. 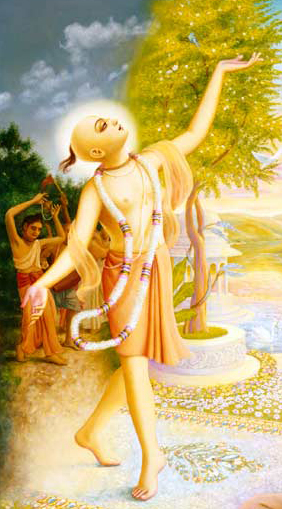 Avatars of Sri Krishna Bhagavan must:
1. Comply with predictions in authoritative scriptures
2. Display 32 auspicious markings on the body and feet
3. Have long arms that past the knees.


Sri Chaitanya Mahaprabhu is 7 ft tall and also known as Sri Gauranga because he has the complexion of molten gold. He has auspicious markings on His body and His feet and his slender arms extend down to His knees which are further evidence that He is an avatar of the Supreme Lord.

Why did he come to the material world?
As stated in the Bhagavad Gita, Sri Krishna appears in the material world for two reasons which are:
1. Annihilate the miscreants.
2. Deliver the pious people.
In the form of Sri Chaitanya He shows his mercy by delivering His devotees and annihilating the demons in everyone’s hearts by chanting the Holy names of the Lord.
He propagated the Harinam Sankirtan movement which is the congregational street chanting of:
Hare Krishna, Hare Krishna, Krishna Krishna,
Hare Hare, Hare Rama, Hare Rama, Rama Rama, Hare Hare. 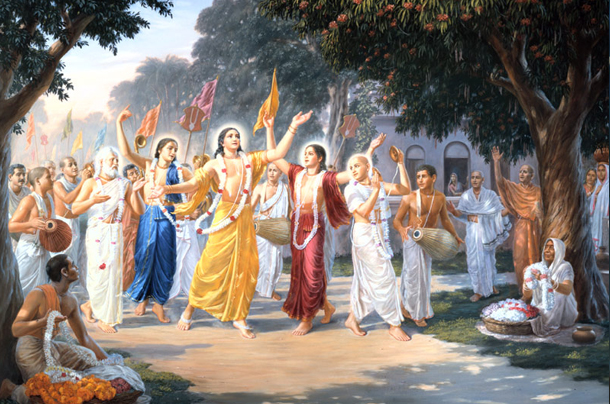 Previously chanting was done quietly and individually. Sri Chaitanya mahaprabhu along with his associates encouraged loud public chanting and graceful dancing with instruments. The intention was for all the devotees, atheists and even the  animals and all living entities, to hear and benefit from the transcendental sound vibrations of the Hare Krishna Mahamantra.

Another reason for Sri Chaitanyas appearance is part of the divine Lila or story of Sri Radha Krishna’s pastimes  Sri Krishna wanted to feel first hand the devotion which Radharani feels for Krishna and so He came as a devotee in the mood of Radharani expressing Krishna Prem. In this way Krishna can understand Her devotional love for Him. 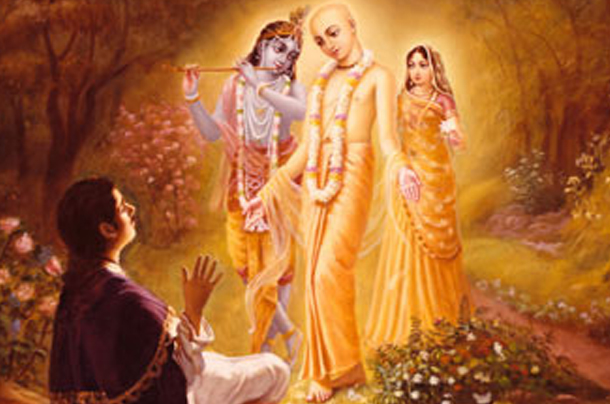 What are his names?
A few of his most popular names that you will hear are:

“In the age of Kali, intelligent persons perform congregational chanting to worship the incarnation of Godhead who constantly sings the name of Krishna. Although His complexion is not blackish, He is Krishna Himself. He is accompanied by His associates, servants, weapons, and confidential companions.” [Srimad Bhagavatam 11.5.32]

Who are his associates?
Sri Chaitanya has four main associates and all five are known as Pancha Tattva (the Five Truths) 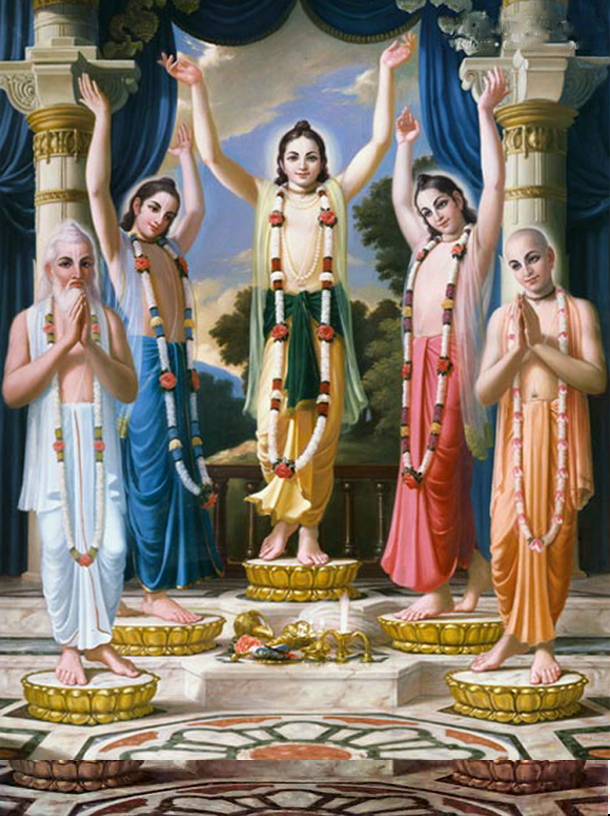 From left to right we have :

“I bow down to Lord Krishna, who appears as a devotee (Lord Chaitanya), as His personal expansion (Sri Nityananda), His incarnation (Sri Advaita), His devotee (Sri Srivasa), and His energy (Sri Gadadhara), and who is the source of strength for the devotees.” [Chaitanya Charitamrita Adi 1.14]

What were his teachings?
Because He is Krishna Himself, His teachings are identical with those in Bhagavad-gita. His only written work is His Shikshastaka, or “Eight Instructions” and If understood properly, they can elevate a person from the mundane plane of materialism to the highest form of devotion, bhakti. Sri Chaitanya taught that Bhakti, or devotional service to Krishna, is both the most effective spiritual practice and the ultimate goal of all spiritual practices.
Sri Chaitanya’s teachings cover three main topics: 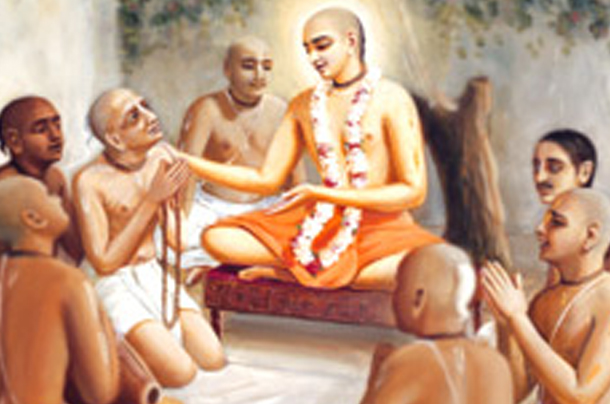