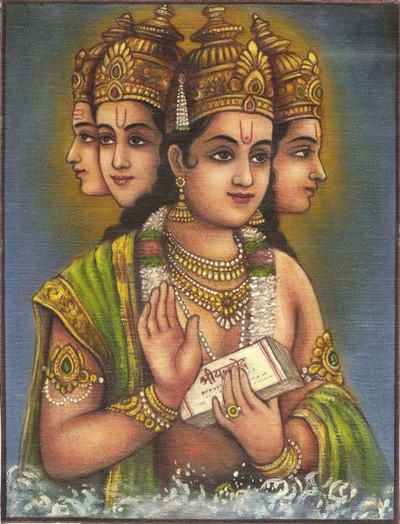 Sri Ramanavami day was special for us this year. As I was doing our regular morning worship in our altar with flowers, fruits and incense, we offered special prayers to Lord Ramachandra. Recalling that the abhishek of the Lord was the first festival that we participated in ISKCON temple few decades back, and also reminiscing our childhood days, when my father would daily narrate us(children) different stories from this great epic Ramayana, I expressed to Lord, it has been a long time since I read or heard His pastimes. Hence I requested for His mercy to enable us to read about pastimes for one hour on this auspicious day. Keeping other important sevas aside, I decided to read Ayodhya Kanda from Ramayana compiled by H.H. Bhakti Vikas Swami.

Soon, I got lost and absorbed into history and pastimes of Lord Ramachandra, that I didn’t know how time flew. As such, I had allotted only one hour for this, because of other sevas, but I kept reading and reading and hankered for more and more information, which I found in another Ramayana by H.G. Krishna Dharma das. These books also reasonably covered Srila Prabhupada’s purport from SB on Lord Rama’s pastimes. It was late evening, when I realized, whole day was occupied on reading the pastimes and I had to put an end, though internally I hankered for more.

At the end of it, one of the strong messages I got was ‘Will of the Providence’.

Nothing could stop Lord Rama’s exile to forest for fourteen years and finally His separation from Sita was also inevitable. Though from mundane perspectives there were several debates and anguish, but nothing could come on the way of ‘Will of the Providence’.

As I rested peacefully overnight thinking about the ‘Will of Providence’, I woke up with same thought following morning but in different context.

Is it not the ‘Will of Providence’ that all conditioned jivas in human form especially who has accepted Lord Krishna as Supreme Personality of Godhead revives back its eternal constitutional position?

It was already 4:00 am; I got out of bed, took blessing of Lord Nrsimhadev and my spiritual master, switched on Srila Prabhupada’s kirtan, got hold of Ipad and started typing our thoughts as they kept pouring. I postponed the morning ablutions for almost half an hour or more. I do this sometimes for conference papers, not otherwise. But this time, I thought I do it, lest I forget sometimes the thoughts and revelations that arise during Brahma muhrta. I had this experience too.

How do we follow the ‘Will of providence’? Thinking thus, I began reflecting on the pastimes of two great personalities, one is Lord Brahma and other is Srila Santana Goswami, which I have summarized below.

The four headed Brahma underwent tapasya for thousands and thousands of years and finally when he was empowered by Lord Krishna to create the universe, he glorified the Lord and was happy to receive the blue print instructions for creation. Subsequently he was called as our Creator, Lord Brahma, god etc. In the process his false ego inflated, he assumed there is only one universe of which he is the empowered creator. The Supreme Personality of Godhead knew about this and wanted to correct this misconception. So He arranged His meeting with several Brahmas of several universes.

Srila Prabhupada narrates this episode in several places. I quote here from Teachings of Lord Chaitanya – Chap. Opulence of Krishna as follows:

<<Trying to convey to Sanatana Goswami something of the extent of one-fourth of Krishna’s energy, Caitanya Mahaprabhu cited an incident from SB in which Brahma the lord of the universe, came to see Krsna at Dvaraka. When Brahma approached Krishna, the doorman informed Krishna that Brahma had arrived to see Him. Upon hearing this, Krishna inquired as to which Brahma had come, and the doorman returned to Brahma and asked, “Which Brahma are you? Krishna has asked.”

Brahma was struck with wonder. Why did Krishna ask such a question? He informed the doorman, “Please tell Him that Brahma, who is the father of the four Kumaras and who has four heads, has come to see Him.”

The doorman informed Krishna and then asked Brahma to come inside. Brahma offered his obeisances unto the lotus feet of Krishna, and after receiving him with all honor, Krishna inquired about the purpose of his visit.

“I shall tell You of my purpose in coming here,” Lord Brahma replied, “but first I have a doubt which I ask You to kindly remove. Your doorman told me that You asked which Brahma has come to see You. May I inquire if there are other Brahmas besides me?”

Upon hearing this, Krishna smiled and at once called for many Brahmas from many universes. The four-headed Brahma then saw many other Brahmas coming to see Krishna and to offer their respects. Some of them had ten heads, some had twenty, some had a hundred and some even had a million heads. Indeed, the four-headed Brahma could not even count the Brahmas who were coming to offer their obeisances to Krishna. … Brahma concluded that the unlimited potency of Krishna could not be estimated. .. >>

So as can be seen, initially when the Lord’s servant told Brahma that Lord wanted to know which Brahma, this bewildered Brahma, as it had hurt his false ego that had made him assume that there was only one universe of which he was the Lord. He couldn’t assimilate this much that that instructions were given to him with regard to creation in specific context for a specific universe and other Brahmas also received instructions for their universes.

Later as the four headed Brahma could not even count the other Brahmas from many universes who were coming to offer their obeisances to Krishna, he realised his mistake of underestimating unlimited potency of Krishna.

The Lord thus indicated to four headed Brahma that all are called universes but they vary in size and structure and accordingly they need different managing capabilities. So there were different Brahmas some with small capacity and some with higher capabilities though all were called Brahma and that it is only a position that can change when a need arises.

In this regard Srila Prabhupada writes,

<<“When Lord Caitanya finished His instructions to Srila Sanatana Goswami, Sanatana, being empowered and enlightened, was so transcendentally pleased that he at once fell at the feet of Lord Caitanya and said: “I am born of a very low family, and I have always associated with lowly people; therefore I am the lowest of sinners. Yet You are so kind that You have taught me lessons which are not even understood by Lord Brahma, the greatest being in this universe. By Your grace I have appreciated the conclusions which You have taught me, but I am so low that I cannot even touch a drop of the ocean of Your instructions. Thus if You want me, who am nothing but a lame man, to dance, then please give me Your benediction by placing Your feet on my head.”

Thus Sanatana Goswami prayed for the Lord’s confirmation that His teachings would actually evolve in his heart by His grace. Otherwise Sanatana knew that there was no possibility of his being able to describe the Lord’s teachings.

So through both Brahma and Sanatana Goswami, the Lord is giving message on how to execute essential or contextual instructions of Lord and spiritual masters or acharyas.

Also we notice both underwent austerities of different kind with different intentions before receiving instructions, such that one achieved the temporary post of a creator, while other revived back his constitutional position.

These are valuable guidelines for all practitioners of mixed devotion who have undertaken the responsibility as caretakers of acharya’s or spiritual masters’ mission and are trying to follow instructions, where many are given in context.

Another message we get is, making full endeavour to do devotional services within the purview of chasing or sustaining a relative position in material existence will leave one bewildered and confused. The phenomenal world is relative. We see in scientific research, a scientist might think he is discovering something extraordinary, but soon after few years, we have another scientist/s with better creative skills whose work supersedes the former work. This disturbs the former scientist internally as his past position is now occupied by another. This is like brahma’s case, as he will have to leave the position soon even after undergoing Tapasya for thousands and thousands of years to occupy the position of creator.

On the other hand, making endeavour in devotional life within the purview of reviving one’s constitutional position will make way to nurture sublime qualities like patience, perseverance, humility etc. and eternal success.

That is, in the relative context, questions will remain like which Brahma and which universe, but in case of our constitutional position, there is no relativity, no competition, our individuality and unique relation with Lord cannot be duplicated, hence we feel peaceful internally even with little effort put in this direction.

Of course to put effort in this direction is not so simple as long as one nurtures one’s false ego. Pastimes of great personalities narrated in scriptures, serve as a great guiding force. Further, as our conviction grows towards prime duty in human form of life prayers can do a lot here where Lord helps to diminish one’s false ego and proportionally instructions of Lord and acharya/spiritual master evolves in our heart such that they guide our actions within the primary goal of attaining pure devotion and accepting the ‘Will of Providence’.