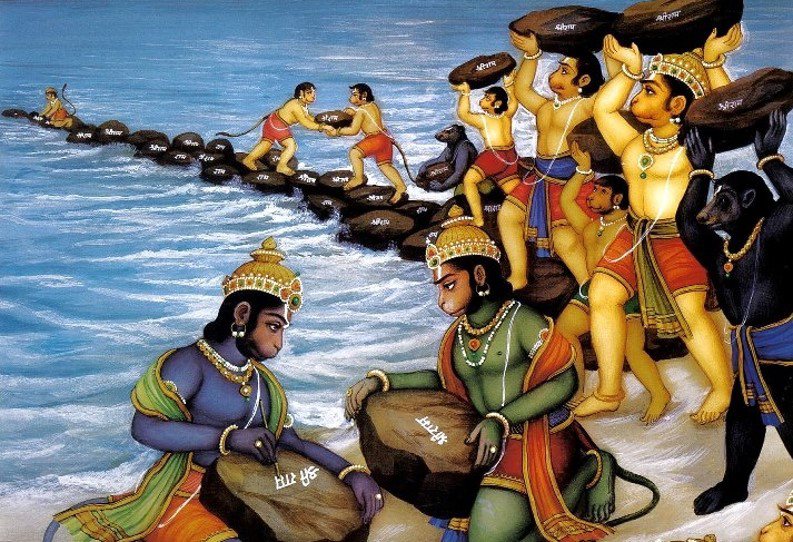 “Nothing Is Impossible for the Omnipotent! “

How can stones float on water!? But they did…once upon a time! In treta-yuga, God appeared as a human being, and engaged some monkeys to throw stones in water. By the power of His name, the stones floated and thus a bridge was constructed across the ocean. Crossing this bridge, God rescued His wife, who was kidnapped by a demon.

This is a popular pastime of Lord Sri Rama. But a common man doesn’t believe in such ‘stories’ calling them ‘mythology.’ Nevertheless, they are not myth but factual incidents recorded in our timeless scriptures. It takes a little intelligence, some deliberation and faith to understand them.

Why can’t this happen?

It is not difficult or illogical to agree that the world we perceive is functioning based on specific laws. We see orderliness and predictability in the characteristics of the sun and the moon, day and night, seasons and so on. By whose power and organization is the nature functioning in such a systematic manner? Any rational person would agree that there is some creator, controller and maintainer for this universe! And, He is ‘God.’

God exercises His omnipotence in exhibiting many names, forms and activities. He resides in a spiritual abode of eternal variegatedness, and at times kindly descends into this created world in His various forms like Rama, Krsna, Nrsimha, Varaha and so on. There are multiple purposes for His descent, namely to protect the righteous, punish the mischievous and establish the right conduct.

The literary masterpiece Srimad Bhagavatam describes that the material universe was formed with the basic ingredients like earth, water, air, fire, ether and so on, that emanated from the body of Lord Maha Visnu, who lies in the causal ocean (karana samudra). After the formation of the universe, Maha Visnu entered it in the form of Garbhodakasayi Visnu, from whose navel manifested a universal lotus, that gave rise to the fourteen planetary systems.

The modern science confirms that this universe consists of several planets in the outer space. It is only by the inconceivable power and will of the Supreme Lord that innumerable planets float like cotton swabs in the space, suspended perfectly in their orbits. If this is possible for the Lord, why can’t He, in the form of Ramacandra, make some stones float in water? After all, can the creator be limited by the laws of His own creation?

Why should this happen?

Another natural question in this context! If Lord Rama had the power to make stones float on water, didn’t He have the power to walk on water and make the other monkeys do it as well? Why did He have to construct a bridge then?

Knowing that His wife Sitadevi was in Lanka on the other side of the ocean, Lord Rama reached the ocean. Accompanying Him was a huge army of monkey soldiers headed by Sugriva, Hanuman, Jambavan and others. Lord Rama, the Supreme Being, fasted for three days, awaiting the response of the ocean personified. When the ocean-god did not come, Lord Rama exhibited anger and simply by His glance, all the aquatics within the ocean were struck by fear.

The ocean-god then hastily approached Lord Rama, fell at His feet and prayed, “O all-pervading Supreme Person, we are dull-minded and did not understand that You are the master of the entire universe. Although my water doesn’t impede You to go to Lanka, please construct a bridge over it to spread Your transcendental fame. Upon seeing this wonderfully uncommon deed of Your Lordship, all the great heroes and kings in the future will glorify You.” (SB 9.10.14-15)

The ocean-god’s initial inability to recognize Lord Rama’s identity, represents the rebellious mentality of the mortal beings that doesn’t allow them to submit to God. But beyond this illusion lies a sublime realization of an eternal blissful life, aligned with the sweet will of the Lord.

In loving devotion, a devotee always wants to glorify the Supreme Lord for eternity just as the ocean-god desired after realizing his mistakes. He desired to see the future generations glorify Rama for doing something that no human being had done before or could do later. Thus the Supreme Lord Rama, by enacting this magnificent pastime, created a subject matter for our discussion, absorption and purification and to increase our love for Him.

What does this indicate?

Lord Ramacandra’s superhuman deed of making stones float on water declares His omnipotence and proves that He is the Supreme Personality of Godhead and not an ordinary human being. He is capable of doing anything and no material conventions can obstruct His will. He was not merely advertised as Godhead or elected by popular vote.

An ordinary human being cannot change the properties of material elements, but thinks oneself so great or sometimes even God! Srila Prabhupada writes, “Nowadays it has become fashionable to create some artificial God who performs no uncommon activities; a little magic will bewilder a foolish person into selecting an artificial God because he does not understand how powerful God is. Lord Ramacandra, however, constructed a bridge over the water with stone by making the stone float. This is proof of God’s uncommonly wonderful power. Why should someone be accepted as God without displaying extraordinary potency by doing something never to be done by any common man? We accept Lord Ramacandra as the Supreme Personality of Godhead because He constructed this bridge, and we accept Lord Krsna as the Supreme Personality of Godhead because He lifted Govardhana Hill when He was only seven years old.” (SB 9.10.15 Purport)

Many people blindly believe some ordinary mortal to be God just by seeing his few magical feats. But what is their significance in comparison to the unsurpassable natural wonders that the Supreme Godhead manifests in this creation!? Srila Prabhupada says that people pay lot of money to see and appreciate a magician barking like a dog, but they don’t appreciate God who created millions of dogs in this world. People believe a so-called saint who ‘creates’ little gold, but they don’t put faith on God who created millions of planets each consisting of thousands of gold mines.

Allured by the tiny wonders created by mortals, foolish people ignore the great wonders created by God. People who adore fictitious heroes in comics and movies, do not admire the real heroic acts of Rama and Krsna, but consider them myth. All the superhuman acts of the Supreme Lord in His various incarnations indicate His Godhood and omnipotence. If only we trust the words of the scriptures and relish such wondrous pastimes of Godhead, we can make tremendous progress in our spiritual journey.

Lord Krsna therefore says in the Bhagavad-gita, “One who knows the transcendental nature of My appearance and activities does not, upon leaving the body, take his birth again in this material world, but attains My eternal abode, O Arjuna.” (BG 4.9)

What’s difficult for the Omnipotent?

The natural elements like earth and water have their inherent properties. The earth element in the form of stone doesn’t float in water. When put in water, it sinks. But who has given them such qualities? God! If God can invest the elements with certain characteristics, He can change them as well, for a specific purpose because the material nature, indeed, is controlled by the omnipotent Lord.

“This material nature, which is one of My energies, is working under My direction, O son of Kunti, producing all moving and nonmoving beings. Under its rule this manifestation is created and annihilated again and again.” (BG 9.10)

The deep mysteries of the miraculous pastimes of Godhead are inconceivable to a common man, but for one who has faith in His unlimited potency such pastimes becomes a source of relish and nourishment.

Gauranga Darshan Das is dean of the Bhaktivedanta Vidyapitha (www.vidyapitha.in) at ISKCON Govardhan Eco Village (GEV). He teaches scriptural courses at several places in India. He has written study guides including Bhagavata Subodhini, Caitanya Subodhini and Gita Subodhini, and compiled vital scriptural verses in the form of the Ratnamala and Tattvamala series. He runs a free monthly e-magzine called Bhagavata Pradipika.