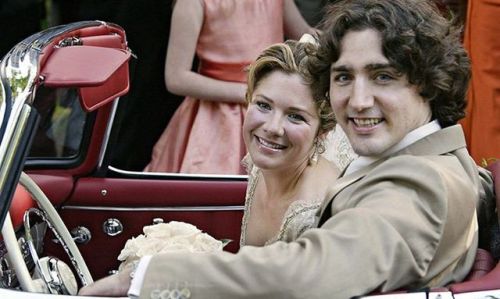 I have a little story about the time I distributed a Bhagavad-gita As It Is to the then-future Prime Minister of Canada, Justin Trudeau and his fiancee Sophie-Gregoire. They married in 2005 so it must have been a year or two before that when I met them.The Montreal Hare Krishna devotees from the ISKCON community of Sri Sri Radha Manora were doing Harinam Sankirtan, the congregational chanting of the Hare Krishna mantra in a parade down trendy St. Laurent Blvd. The parade was commemorating the celebration of “India Independence Day” Each ethnic group of India had their float or representation of drummers, dancers and colorful saris and traditional dress from Punjab, Bengal, Gujarat South India, etc… and then there was our group of Hare Krishna devotees with the Vaisnavis dancing in colorful festive saris and the men in dhotis, kurtas playing kartals and mrdangas
While I was immersed in singing the nectarean Hare Krishna mantra with the devotees in street kirtan to the sound of Bengali mrdanga drums and karatala cymbals, the son of former Prime Minister of Canada, Pierre Elliott Trudeau’s son, Justin Trudeau, came up beside me in his father’s vintage Mercedes Gullwing convertible. As he slowly drove by me in the parade I urgently asked a devotee if we had any of Srila Prabhupada’s Bhagavad Gita As It Is with our chanting party!.While my friend searched for a Bhagavad-gita, I thought deeply about what would be the best thing I could say to Justin in the few seconds I would have to do that . The devotee found someone with a Bhagavad Gita As It Is and brought it to me. I was a little nervous, not knowing what the reaction would be, and I walked up to the slow moving car. Justin was waving at the crowds and smiling, with his wife or fiancee at the time, Sophie Gregoire, doing the same, and I felt awkward to interrupt them as they connected with the crowds.
As I reached the car I said “Justin!” He turned and looked at me a little puzzled and said “ Yes?”
I said “I have a gift for you.” His eyes opened wide and he smiled in anticipation.
While handing the book to him with both my hands, looking into his eyes, I said “Your father read this book, and it was used by the kings of India to care for their citizens. I thought it might come in handy for you some day.”
He gave a bigger smile and was very grateful to receive it saying “Thank You!” The car continued on, a little quicker than we were walking in the parade.
I felt instant bliss thinking how the bhakti-lata bija seed of devotional service to Lord Krishna had been planted in probably the next Prime Minister of Canada, and that maybe it might result in purifying his consciousness and thus benefit the citizens of Canada. I was hoping the influence of the Bhagavad-gita might help to close a few slaughterhouses.
As Justin and Sophie Gregoire Trudeau’s car continued on past the devotees of Krishna in the parade, I thought of the Bhagavadgita verse :
“Whatever action a great man performs, common men follow. And whatever standards he sets by exemplary acts, all the world pursues.” ~ Bg 3.21
I later thought if I was in another country and tried to approach the future President of the nation, I might have got jumped by Security, so I was grateful Krishna inspired me and allowed me to do this valuable service.
I later found out Sophie-Gregoire is a vegetarian, and practices yoga which are sattvic/goodness activities. They are not an end in of themselves, but a foundation for further spiritual progress.