Around 1986 my wife Mohini Rupa regularly dressed Radha Gopinath. This was at the Kings Cross/Darlinghurst temple.

One morning she was feeling too ill to do the service, and she couldn’t get anyone by phone to replace her. She sent me at 4:00 am to dress Radha Gopinath.

I was not acquainted with where all the necessary items were kept. A Deity paraphernelia room can be quite complicated, with an order to it that only the pujaris know. There are many drawers, many shelves, and many storage boxes.

I bathed Their Lordships and dressed them, but when it came to putting their hair on I came across a problem.

One of the wigs in the hair box was in two pieces, one for each side of the head. I tried to put it on Radharani, but it kept falling off. I tried to clip it with hair pins, but even though by normal calculation it should have stayed on, it fell off. It was getting late and the curtains would soon open, so I was anxious. I tried to put it on again and it fell again. After it had happened three or four times, I gave up and put another hair piece on Radharani, and all went fine.

I was quite frantic trying to finish in time, and I was anxious becuause I am not a regular pujari. I didn’t know what devotees would think of the way I dressed Their Lordships. When the curtains opened, I was standing next to Nareshvara Prabhu. He asked “Who dressed Radha Gopinath today?” I shyly said, “Me?” “This is nice!” he said. “This is what we need.” Then I felt much better. 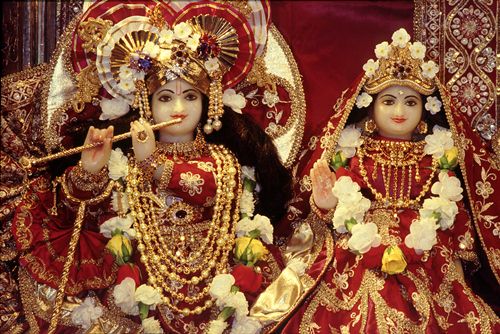 When I returned home, I told my wife what had happened. She laughed. “You tried to put Krishna’s hair on Radharani!” We both laughed about it for a long time.

Afterwards I had a major realization: One cannot dress Radharani unless she allows it. One can’t do anything for the Deities unless they allow it. They are not statues, but really Radha and Krishna arca-avatars. They appear in this world in these forms so we can find Them, see Them and serve Them. By the mercy of Srila Prabhupada, Radharani allows us to serve Krishna.