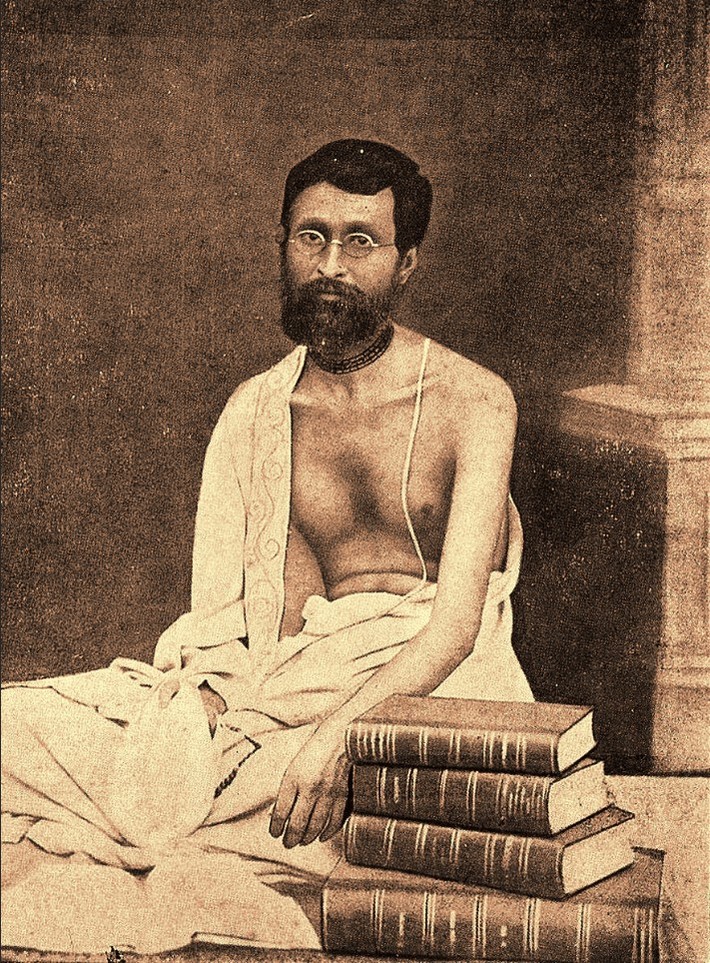 My Father-in-law was at first alarmed by the framed photo of Srila Saraswati Thakur adorning our living room wall captioned with His Divine Grace’s bold declaration that “…Western civilization must be crushed.” I explained that the whole world was contaminated by the ideology of extreme exploitation which has it’s heart inextricably intertwined with the roots of what History portrays as Western “civilization.” This idea of exploitation ruins any realm in which it exists like a malignant cancer or lethal virus. It is this ruinous mood which must be crushed and not the spiritually hollow edifices populated by the despairing, spiritually bankrupt masses. It is this spiritually cancerous mood which must be crushed. For the ultimate, intrinsic mutual benefit of all the denizens of Earth. Crushed by Love. Whose Love? Mahaprabhu’s Love for Krishna, which was His Ardent Desire to dispense to all souls. Unconditionally. Regardless. Forever. Srila Saraswati Thakur Himself flawlessly exemplified this Divine Love to an unfathomable extent. Indeed, He was the ripened fruit of Srila Bhaktivinode’s Divine Love and so perfectly represented such Supreme Affection to an unbelievable degree. Srila Saraswati Thakur was Himself the very Personification of Krishna-Prema, which is the ultimate goal, primary purpose and final function of all souls.

If only the Real sambandha-jnana/ Krishna Consciousness of Srila Saraswati Thakur could finally, at long last, Really get out there to it’s intended audience of the fallen forgetful souls, the world would then be transformed by the wave of Real Devotion. We have heard that Mahaprabhu and the Sri Pancha-tattva broke open the Storehouse of Love Divine as if breaking a dam and unleashing a flood of Krishna-prema upon the fortunate masses. And yet there is scant apparent contempoaray evidence of This in the world. As if the Wave of Love has been held in check by a dam of hate.

No doubt, ecclesiastical inconsistencies and consequential ideological incongruities must be adequately addressed. But as should be the case with all problems, in the right mood. The right idea conveyed in the wrong mood helps no one. Genuine reform of ideological improprieties and subsequent impieties is indeed a a worthy and honourable cause. Nonetheless, it is not the Original Cause.

Souls do wrong not because they are inherently evil, but rather because they have misunderstood or misconceived Original Ideology. Therefore, misunderstanding and misconception are the real problems and not those who have misconceived.

If, as an ostensible reformer/healer of the many woes of any society, civilization or culture I am apparently unable to accurately perceive and correctly diagnose the actual collective malaise, how can I hope to achieve real reform? Of anything. Contrary considerations festering with spiteful malevolence have about as much truly universal relevance, validity and utility as a wet paper bag filled with fetid, hot air. Very little real reform will be accomplished from such a myopically, distorted perspective. And a hodge-podge of malcontentment will eventually effectively incinerate all hopes of genuine, mutually beneficial reformation as the few lingering remnants of the original organization eventually smolder away into nothing but the Ultimate Essence of the Original ideal. Same as it ever was.

Working on rooftops fifty feet in the air makes many workers have what they call a “Hari” experience. I explain that what they think of as “hairy,” is really “Hari,” an original Name of God known to souls since time out of mind. That just as when fearful people throughout the world instinctively, as souls call out “Oh God!” In India, many souls call out “Hari!”, which is a Name of God which refers to His Innate Supreme Ability to remove all inauspicious or evil things.

The dreams and screams, of course continue, without any apparent end in sight. Dreams of Sri Guru. And Mahaprabhu Himself. Screams of my Daughter, my Teacher. And the suffering jivas. Who will hear their cries? And Why?