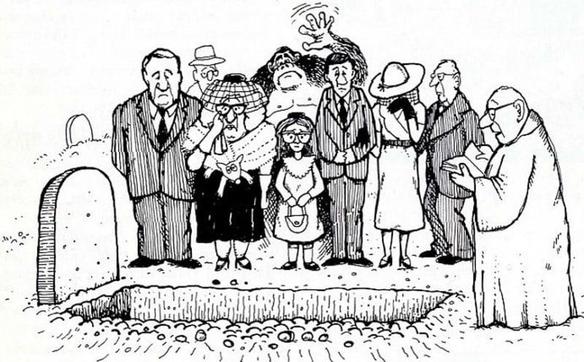 For thirteen years at the Gorilla Foundation in Woodside, California, a developmental psychologist has been teaching sign language to Koko, a female gorilla. Although Koko shows remarkably human emotions and intelligence, her psychologist says she’s an average gorilla at best.

Koko’s psychologist first tried teaching her the same hand signs used by the deaf, but in time Koko began inventing her own sign language. For example, when she was shown a wedding ring, she responded by combining the sign for “finger” with the sign for “bracelet.” Today her working vocabulary is about five hundred words. She initiates about half of her conversations, asks questions, and will even deny things. She also talks to other animals.

The most interesting thing about Koko, however, is her communication of certain abstract concepts, like old age and death. She cried when her pet kitten (which she named All Ball) died. Previously, her keepers phrased questions to her about death: “Why do gorillas die?” they asked, She sighed in return, “Trouble, old.” When asked, “Where do gorillas go when they die?” She answered, “Comfortable hole,” blowing a kiss goodbye. Her psychologist was puzzled where she got such a concept, but found a confirmed observation of a group of gorillas who came upon a dead crow, dug a hole, placed the corpse within, and covered it with dirt.

Perhaps this is the most important discovery about Koko: a gorilla can know as much about death as many people do. A person is buried, and that’s about it comfortably “resting in peace.” It’s amazing that a civilization as materially advanced as ours officially teaches no more about death than what an average gorilla knows!

The Brhad-aranyaka Upanisad states, yo va etad aksaram gargy aviditvasmal lokat praiti sa krpanah: “He is a miserly man who does not solve the problems of life as a human being and who thus quits his body like the animals, without understanding the science of self-realization.” Krpana means “a miserly person,” one who hoards valuable assets. In other words, the real value of human life escapes the person who neglects self-realization.

Who am I? What is the purpose of life? Why do I have to die? Where am I going? These questions signal the start of self-realization. Too often they’re postponed till the last bewildering moment of death.

Such procrastination is due to attachment. To be attached to the body is natural, because we are living in it. But without proper spiritual education, we tend to equate the body with ourselves. We assume a bodily identity, an identity we constantly reinforce by innumerable forms of sense gratification. As we grow older, our identity expands with our attachments from our bodies to our relatives, friends, community, race, nation, and humanity.

Affection for these things is natural, but in the life of one devoid of self-realization, that affection becomes the cause of miserly existence. Thousands of years ago, on the Battlefield of Kuruksetra, Arjuna faced the perplexity of material identity and affection by consulting Lord Krsna. Thus, by Krsna’s transcendental advice, Arjuna was able to overcome his attachments.

We should also take advantage of Lord Krsna’s teachings in the Bhagavad-gita. After all, our attachments, be they spiritual or material, are based upon our education.

The word education comes from the Latin educare, which means “to bring” or “to call” out (what is already there). Koko’s education brought out her realization which was pretty good for a gorilla that life ends with the body. But should an intelligent human being be satisfied with a comfortable hole in the ground at the end of life? The opposite of the krpana (miser) mentioned above is the brahmana, or one who by developed intelligence is able to use the human body for successfully solving the problems of life. That is the special prerogative of humans over gorillas.

Source: http://www.dandavats.com/?p=95703
E-mail me when people leave their comments –
Follow