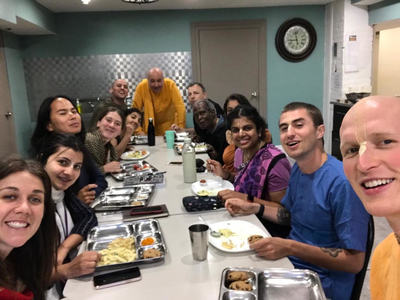 Of all reading material that comes my way in a natural devotional setting – the Gita, the Bhagavatam and anything else which is a publication of the Bhaktivedanta Book Trust, I also include the occasional more secular material (even an occasional newspaper) – I confess to my favorite amongst all.

I just love hearing or reading of the past times of Prabhupada. There is a wealth of material out there on the subject of His Divine Grace, the founder and acharya (teacher) of the great bhakti movement of the International Society of Krishna Consciousness. I really enjoy all that’s been written about him from different authors such as Mukunda, Shyamasundara, Gurudasa, Yamuna, and there’s Yogeswara – all students of his who spent quality time with him. The one publication that has become a permanent fixture in our Hare Krishna society is Prabhupada Lilamrta by Satsvarupa Goswami.

At noon the head of our Bhakti Academy, Brhat Mrdunga, reads from this great literature while all participants take their lunch. Well, I had the opportunity to read several pages on his early time in New York. All were attentive. All were enjoying.

It’s a sweet little gesture that endears us to Prabhupada. A sample: “Once Prabhupada was talking with Mrs. Ferber about Indian cuisine, and she mentioned that she especially likes samosas. The next time he paid her a visit, he brought a tray of samosas, which she enjoyed.”