0
The appearance of Sri Govardhana in Vraja 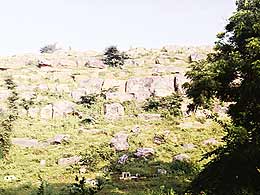 According to Adi-varah Purana, during the advent of Sri Ramacandra, monkeys and bears all brought large rocks and stones from many places to construct a bridge across the ocean. Hanuman also received the order from Sri Ramacandra to help build the bridge. Hanuman uprooted Govardhana from Uttarancala, but while carrying him to the ocean he heard a divine sound that announced, "The ocean bridge is now complete. No more rocks are required."

Hearing this, Hanuman became some sad and put down Sri Giriraja, where he stands today. Giriraja also became unhappy and said to Hanuman, "You have deprived me of the touch of Sri Rama's lotus feet. I will curse you."

"Please forgive me," Hanuman replied. "In the next Dvaparayuga, your desire will be fulfilled. At that time, the Supreme Lord Sri Krsna will stop the worship of Indra and worship you instead. Angered, Indra will try to destroy Vraja by unleashing his thunderbolt and by sending torrential rains. At this time, Sri Krsna will hold you on His hand to protect Vraja. In this way, He will fulfill your desire." Upon saying this, Hanuman leapt into the air and arrived at Sri Ramacandra's side by the aerial pathways.

After narrating the whole incident to Him, Sri Ramacandra said, "All the rocks that have been assembled to build the bridge have been delivered by the touch of My feet. But I shall fulfill the desires of Govardhana by holding him on My hand and touching Him with My whole body. At the close of Dvapara-yuga, I shall take birth in the dynasty of Yadus and make Govardhana famous as the best servant of Hari by herding the cows with My sakhas on his slopes and by enjoying with My beloved gopis in his kunjas." This is how Sri Govardhana appeared in Vraja.
E-mail me when people leave their comments –
Follow