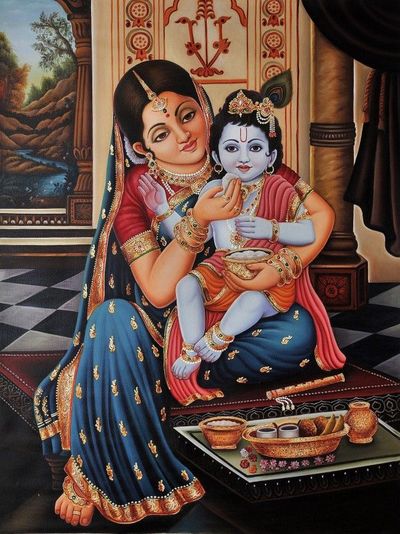 Translation: Alas, how shall I take shelter of one more merciful than He who granted the position of mother to a she-demon [Putana] although she was unfaithful and she prepared deadly poison to be sucked from her breast?

Purport: Here is an example of the extreme mercy of the Lord, even to His enemy. It is said that a noble man accepts the good qualities of a person of doubtful character, just as one accepts nectar from a stock of poison. In His babyhood, He was administered deadly poison by Putana, a she-demon who tried to kill the wonderful baby. And because she was a demon, it was impossible for her to know that the Supreme Lord, even though playing the part of a baby, was no one less than the same Supreme Personality of Godhead. His value as the Supreme Lord did not diminish upon His becoming a baby to please His devotee Yasoda. The Lord may assume the form of a baby or a shape other than that of a human being, but it doesn’t make the slightest difference; He is always the same Supreme. A living creature, however powerful he may become by dint of severe penance, can never become equal to the Supreme Lord.

Lord Krishna accepted the motherhood of Putana because she pretended to be an affectionate mother, allowing Krishna to suck her breast. The Lord accepts the least qualification of the living entity and awards him the highest reward. That is the standard of His character. Therefore, who but the Lord can be the ultimate shelter?