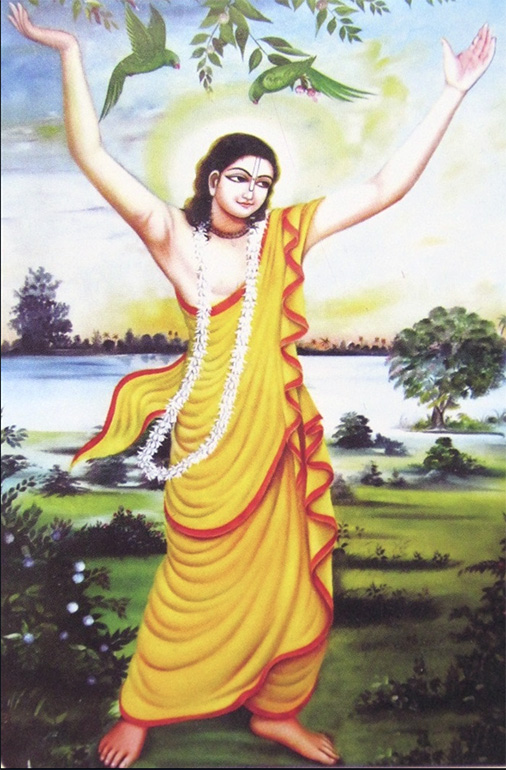 Chanting the holy names of the lord is the most profound method in this age of Kali to rise above the influences of Maya. To engage in Harinama Sankirtana is definitely the only viable process of freeing ourselves from this precarious position we have implicated ourselves in within this material world. Inaugurated by Lord Caitanya who then empowered his pure devotee, His Divine Grace A.C Bhaktivedanta Swami Srila Prabhupada, we have all been exposed to this Yuga Dharma Harinam Sankirtan through which we are able to attain to the perfection of life, namely Krishna Prema.

Devotees that have taken shelter of Harinama experience a gradual unveiling of grand spiritual magnificence which is deposited within Sri Nama through their progressive devotional development. This gradual unveiling gives light through the dark dense forest of material existence and brings the sadhaka closer and closer to realizing the Holy names in its full fledged manifestation, as being non different to Sri Krishna himself.

As it is stated in Sri Caitanya Caritamrta, Adi-lila 17.22:

“In this age of Kali, the holy name of the Lord, the Hare Krsna maha-mantra, is the incarnation of Lord Krsna. Simply by chanting the holy name, one associates with the Lord directly. Anyone who does this is certainly delivered.”

One personality who had ample experience in dedicating his life to the chanting of the holy names was His Grace Sripad Aindra Prabhu.
Aindra Prabhu was constantly immersed in chanting the holy names throughout his Krishna Conscious life. His level of sadhana was remarkable with him chanting on average of 9-12 hours daily, be it during Kirtan or during his own personal Nama Japa. He has been chanting a minimum of one lakh Nama of personal Japa for many years and in the last year prior to his departure he had increased his daily quota from one lakh Nama to two lakh Nama.

So seeing his close relationship with Sri Harinama I thought it would be nice to share an experience and realization which Aindra Prabhu had. The following is a transcript of a conversation with Aindra prabhu speaking about a particular incident he had with the holy name. I definitely found this very inspiring as it helped to broaden my understanding on certain aspects of Nama Tattva. I am sure that it will be equally enlightening and inspiring for others as it has been for me.

“Sri Harinam is not dependant on our tongue to make his divine appearance. It’s not just by articulating the syllabic sounds with this fleshy tongue that the holy name must appear.

The holy name is independent as much as Krishna is independent. So I was telling of an incident which was a very startling and amazing incident that I experienced, wherein I was being overcome by a certain Tamasic mystics tantric power. It was here in my room, but I had become paralyzed, very similar to the way that one would be paralyzed if one is attacked by a ghost.

But I could understand that it was a certain yogi of sorts in a certain Tantrics mystic power overcoming me. I was unable to escape, even though it was too late before I realized what was happening. Too late to try to counter the effect of the thing, so I became overwhelmed.

I was being paralyzed and practically speaking the purpose of the yogi was to put me into a state of suspended animation. Or in other words to put me in a comatose condition, and it was actually a very dangerous situation.

But suddenly from the sky, from above me, suddenly the Mahamantra in a very very very pure and clear sounding voice descended upon me. I cant even begin to try to reproduce that sound vibration, but the Mahamantra was independently descending.

So I had a direct experience of the personality of Godhead in his Harinama Svarup, descending and appearing to deliver me, to save me. And even now that sound, that experience is ringing in my ears. I can never forget the experience of the divine appearance of the holy name in my consciousness at that time. So on account of that experience I came to what I feel is a rather profound realization, that the holy name can appear even without the vibration of our tongue. In other words he doesn’t need us for anything, he’s independent, he doesn’t need us to vibrate, Hare Krishna Hare Krishna with this fleshy tongue for him to make his manifestation in this world.

Rather it is only because of his special causeless mercy upon certain devotes that he may choose by his own freewill to manifest by using their tongues as an instrument. In other words by engaging them in his seva he may choose to manifest by dancing on the tongue of a pure devotee. So the point that I think I was bringing out the last time we discussed, is that we should feel very privileged if Caitanaya Mahparabhu who is the personification of the holy name, if he decides to use any of us as an instrument for the propagation of the Holy name in the world. We should feel that we are very very privileged to be used as his instrument.

So the point is that we should be praying to Mahaprabhu, praying to Lord Caitanya, praying to lord Nityananda, praying to the Holy name to be granted the privilege of being used as their instruments in the matter of propagating Krishna Consciousness in the form of Sankirtana.” 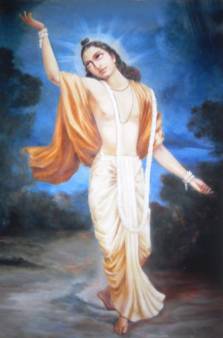