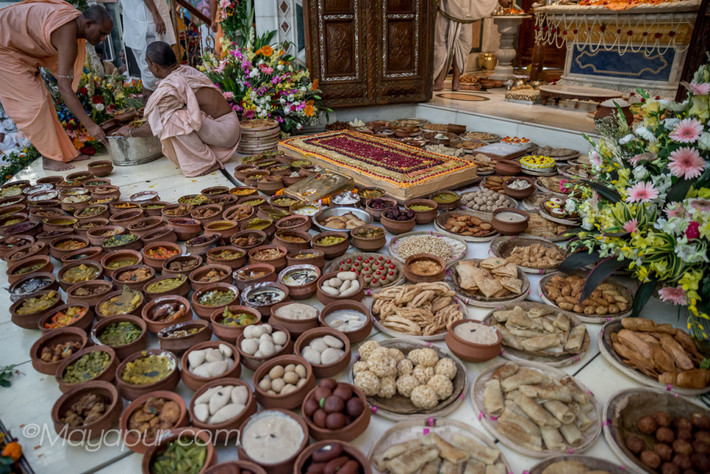 The bumblebee drinks only nectarous honey from flowers. It is not interested in anything else.

This is similar to swan mentality described in nīrakṣīra viveka nyāyaḥ. There are many other animals, which are very much fond of impure and obnoxious substances, like swines, worms, dogs, cats, and the rest. By my own eyes I saw a small child passing stool on the side of the road, while the hog was waiting. As soon the child finished, the pig quickly run to eat the stool, because it is delicacy for him while worm. While walking in the morning Dublin streets, I saw often pigeons to peck up vomits of drunkards left from the night before. Many people has such taste for stool-like substances, which they tag as food. This is the cause of many uninvited diseases, often of pandemic proportions, to take hold of humans. People indeed consummate pigs as well, which eat stool, not to mention daily mass-murdering of innocent animals in billions. This is speeding up the apocalypse the human race is imprudently asking for in the name of the progress from middle ages. In the same manner, this taste for stool reflect their mentality to look for defects in others and all around them, which makes them unhappy and frustrated all through. Mostly this is due to improper education, so rampant in today society, combined with lack of will to improve the taste. Such people are therefore condemned to take birth as pigs and worms to bore their noses into stool, due to only so unwilling to control the tongue. Tā'ra madhye jihwā ati, lobhamoy sudurmati, tā'ke jetā kaṭhina saṁsāre. The opposite to such unsavory mentality is the life style of the swan or a bumblebee. We should learn from these creatures their liking for nice things, such as honey or milk. Altogether, nice and tasty kṛṣṇa-prasād ought to be prepared and served far and wide to purify nasty habits. We have seen practically that anyone and everyone appreciates mahāprasādam regardless his religious believe or his claim to be meat eater. Practically, anybody who tastes such nectarian foodstuff is immediately captured by personal beauty of Kṛṣṇa. His tongue is then controlled, and by kind mercy of Lord Kṛṣṇa, he is saved from hell. Kṛṣṇa baṛo doyāmoy, koribāre jihwā jay, swa-prasād-anna dilo bhāi. (from https://www.kasyadas.com/tools-of-logic )