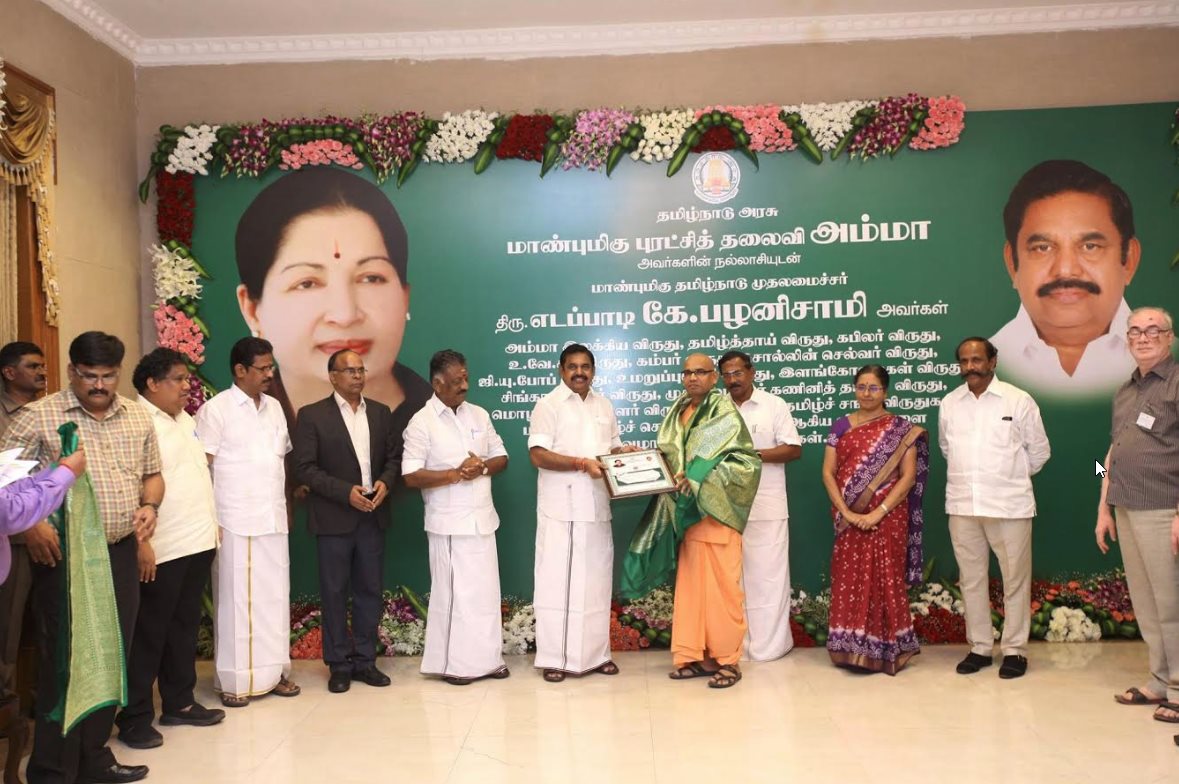 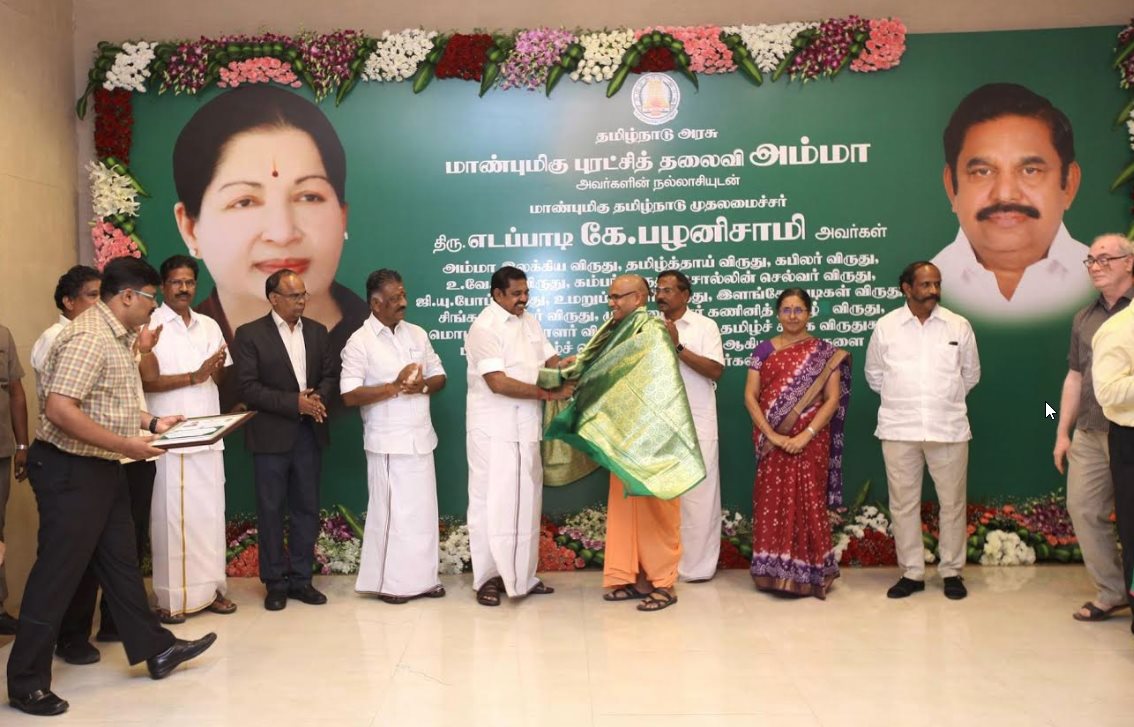 19 February 2019, Chennai: Tamil Nadu Government has issued “Best Translator Award 2019” to Sri Giridhari Dasa, for translating Srila Prabhupada’s Sri Caitanya Caritamrta into Tamil. The government has recognized that the translation work of over 8,000 pages was done in fine language with elegance. In the function held in Chennai Secretariat Office, the Honorable Chief Minister of Tamil Nadu Mr. Edapadi K Palaniswami issued the award along with a certificate, and a cheque for INR One Lakh. The Honorable Deputy Chief Minister Mr. O Panner Selvam, Tamil Language and Cultural Development Minister Mr. K Pandiyarajan, Tamil Nadu Chief Secretary Mrs. Girija Vaidyanathan, Several IAS officers and many other high officials were present during the function.

Although the award was towards the quality of translation, this is the first time that Srila Prabhupada’s book got recognized by Tamil Nadu Government and thus it was joyful occasion for Tamil devotees. The award was certainly a strong recognition for Srila Prabhupada, Bhaktivedanta Book Trust, ISKCON, Krsnadasa Kaviraja Goswami and to the Supreme Personality of Godhead Sri Krsna Caitanya Mahaprabhu. Even today, Mahaprabhu is largely unknown to the Tamil society, and this award can help our society in our mission to make His name chanted in every town and village.

Upon receiving the award, Sri Giridhari Dasa, who also serves as the editor-in-chief for Tamil Back to Godhead (Bhagavad Darishanam) commented as follows: “I cannot claim the award for myself, since we have a whole team of devotees who participated in the project by doing various services like fidelity checking, proofreading, layout, typing, giving suggestions, etc. Without such help from dozens of devotees, the book would not have come in the beautiful form in which we have it today. So, the award is actually the recognition for the entire team. We offer the award to the lotus feet of Srila Prabhupada.”

Sri Giridhari Dasa is serving in the BBT since 2005, and he is a disciple of His Holiness Bhakti Vikasa Swami who commented, “Sadhu! Srila Prabhupada was always pleased when his disciples’ achievements were recognized by secular authorities.” HH Bhanu Swami (the GBC for Tamil Nadu), Ananda Tirtha Dasa (Trustee of BBT Mumbai) and several other devotees appreciated the service.
Few notes about the translation project:

* Started in July 2011.
* Transliteration pattern was decided in consultation with several linguistic scholars.
* Almost the whole translation work (except word-to-word) was done in two months marathon (May-June 2014). Sri Giridhari Dasa dictated the whole translations while others did the rest of the work (typing, fidelity checking, layout, initial proofreading etc).
* An email conference with more than 30 Tamil devotees was functioning to consult and clear the doubts.
* Careful editing naturally took a lot of time.
* After one round of editing, Sri Giridhari Dasa expended his style sheet in consultation with several Tamil scholars, and did a second round of editing.
* First round of proofreading (after first editing) was done by nine devotees who were having a good proofreading experience. Apart from these nine devotees, fourteen devotees did the proofreading for a few chapters each.
* Second round of proofreading (after the second editing) was done by four devotees.
* Seva was completed in Nov 2017.
* Printing of 3,000 sets with international quality was taken up.
* Book was released in grand manner in ISKCON Chennai in May 2018, with the pre-order of about 600 copies. Several dignitaries from various field attended the function.
* Till now, more than 1,300 sets have been distributed.