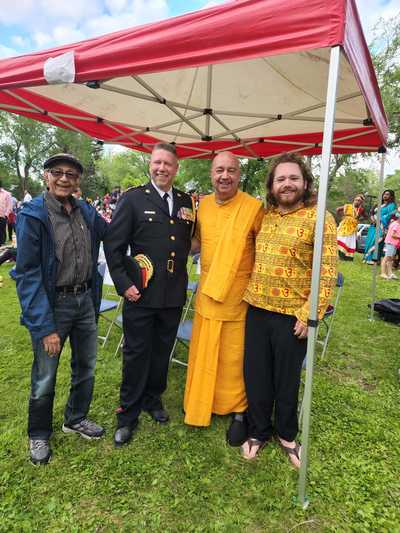 Two and a half hours north (by car and not on foot) is the city of Saskatoon. I made it in time for the Chariot Fest managed by a gracious couple, Vivek and Amee. They receive a lot of help from their friends. Two lovely young daughters got to the stage for a “Bharat Natyam” classical dance performance.

Ryan flew in from Toronto to play djembe to my lead on chanting. Our methodology was to get safely seated in the back of the “sound” truck and sing and play from there. Radhika from Milton was on the hand cymbals (kartals). This worked well. We were stationed with the vehicle in slow movement in front of all the chanters of which were several hundred. This provided good interaction. And from my view, if I saw one of the pedestrian chanters step over the middle yellow line on the street I used my mic to indicate, “Stay on this (safe) side of the line.” It wasn’t often but I felt I was assisting the police escorts.

Speaking of police, you will not find a cooler “Chief of Police” in Canada. Chief Officer Troy Cooper danced with us at the park site along the North Saskatchewan River. In fact, I think the “icing on the cake” to this 7th Annual Ratha-Yatra was the kirtan session at the end. People got involved with the “Swami Step” and other movements, to the rhythmic beat of the drum and after the light but tasty and well-liked, grain-free meal. Good work done! The Lord of the Universe must be pleased.

Ps. I managed to grab and eat some wild saskatoon berries at the end of the day. 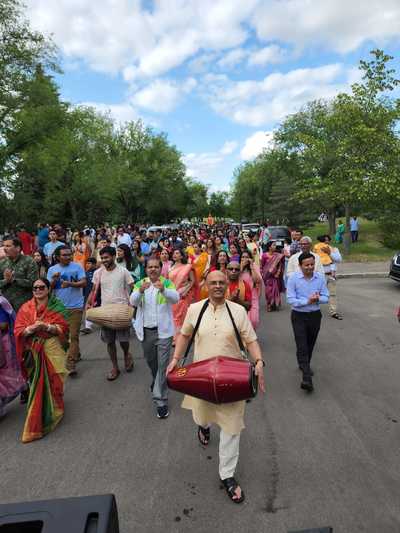 Tags: saskatoon
E-mail me when people leave their comments –
Follow