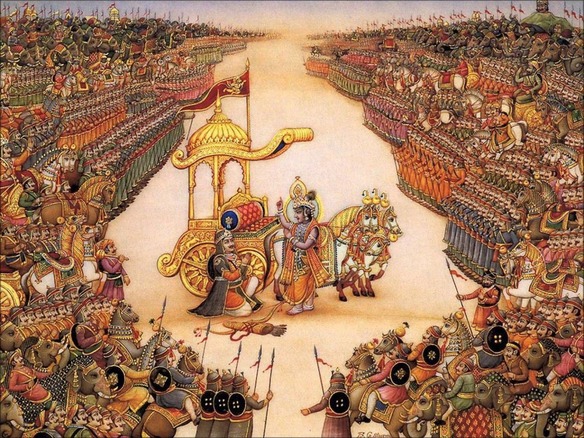 Arjuna is known as Paranthapah because he is a chastiser of the enemy. He enters the Kurukshetra battlefield with a fighting spirit on a chariot bearing the flag marked with Hanumān being driven by Krsna and drawn by white horses. He wanted to see the combatants and asked Krsna to maneuver the chariot into the midst of the armies of both parties.

Arjuna observed the opposing side and got bewildered for participating in the annihilation of his whole clan. Arjuna loved, respected, and revered many of those who appeared on the opposing side of the battlefield in the army of the Kurus. He no longer saw the opposing groups as accomplices of evil-minded Duryodhana but rather as his friends and relatives. He became perplexed about his obligations as a Kshatriya, particularly when it came to facing Bhisma and Drona, whom he adored more than his own life.

Arjuna was in an irresolvable ethical dilemma, internally battling with his love and affection for the very same people he aimed to destroy. Suffering from the conflict of gratitude versus dharma (occupational duty), Arjuna failed to see things as they are and lost his determination to fight the battle, the one that initially brought him to the Kurukshetra battlefield. He broke down emotionally, overwhelmed with false grief due to family affection, drops his Gandiva bow and arrows, and turns to Krsna for help with his mind depressed, and his eyes full of tears.

Arjuna presented a number of arguments rooted in knowledge of religious principles to convince him not to fight. It was obvious to Arjuna that his love for his family members and his desire to protect them from killing were behind his perplexities. However, despite understanding that he had a duty to fight, he was unable to carry out the task due to miserly weakness.

Being confused about his duty Arjuna unconditionally surrenders to Krsna and asks Him “to tell me for certain what is best for me (Gita:2.7)”. Krsna would have simply said – “All you need to do is to fight, and take back your kingdom, be successful!” Instead Krsna wanted to address the root cause of his moroseness, enlighten Arjuna to perform his duty without any attachments.

Arjuna’s refusal to fight the battle was due to his considering himself the absolute doer of his actions. Krsna smiles at Arjuna for his foolish moroseness and begins the narration of the Bhagava-Gita lifting Arjuna out of both the outer and the inner battlefields.

Bhagavad-gita was spoken by the Lord to Arjuna because he is a dear friend and devotee to the Lord (” bhakto ’si me sakhā ceti” Gita: 4.3). At the end of the Gita, Arjuna is intellectually illumined, spiritually strengthened, and emotionally enlivened. He was firm and free from doubt and prepared to act according to Krsna’s instructions (“kariṣye vacanaṁ tava” Gita:18.73), returned to the battlefield, and won the battle.

Bhagavad-gita inspired Arjuna to execute his duty without attachment. In our daily lives, we also come across bewildered situations while executing our occupational duties. If so, how can we deal with those situations? Even though there is no specific formula to handle those situations, there is no reason to remain bewildered. That divine grace comes to us in many forms and the ways it calls out to each of us will be distinctively related to our degree of surrender and faith in the Lord who is situated right there in our hearts as the Paramatma. That Supersoul or Paramatma has been accompanying us from time immemorial of our sojourn in this material existence, simply waiting for that moment when we finally decide to turn towards Him.

All we have to do to reconnect with Paramatma and stop taking the dictation of our mind and instead take shelter of the Paramatma’s external manifestation, the bona fide spiritual master, by hearing, serving, and obeying him. In this way, through a gradual process of purification, we will gradually reach that stage where we can clearly hear the instructions of the Paramatma at every moment. He gives the intelligence to approach a problem and the strength to face the consequences of the result of the approach. This is Krishna’s mercy upon us.

The Bhagavad-gita inspired Arjuna to fight in the battle and the same Bhagavad-gita inspired Arjuna after the war to perform his duties with all power, and finally to take renunciation. Bhagavad-gita is not meant to inspire one to fight, but it inspires us to follow Lord Krsna’s instruction in all circumstances. Though it was spoken in the context of the Battlefield of Holiness, but it contents aren’t about the battle or violence Out of seven hundred verses, only a few verses spoke about the preparation of the armies for the battle. The rest of the Gita explains how to live in and how to leave this world in the consciousness of Krsna.

In this material world we are always being bounced up and down by the dualities, So the key is to remain always equipoised seeing how at every moment in all situations we are being blessed by the loving mercy of the Lord. This consciousness is called Krishna consciousness, and is the perfection of our existence. Gita’s wisdom elevated Arjuna from petty weakness of heart to Parantapah. Similarly, if we embrace Gita’s wisdom like Arjuna we too will become Parantapahas.