The Childhood Pastimes of Krsna 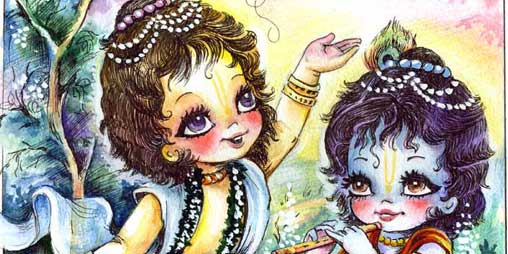 1. Sometimes the gopis would say, "If You dance, my dear Krsna, then I shall give You half a sweetmeat." By saying these words or by clapping their hands, all the gopis encouraged Krsna in different ways. At such times, although He was the supremely powerful Personality of Godhead, He would smile and dance according to their desire, as if He were a wooden doll in their hands. Sometimes He would sing very loudly, at their bidding. In this way, Krsna came completely under the control of the gopis.

2. Sometimes mother Yasoda and her gopi friends would tell Krsna, "Bring this article" or "Bring that article." Sometimes they would order Him to bring a wooden plank, wooden shoes or a wooden measuring pot, and Krsna, when thus ordered by the mothers, would try to bring them. Sometimes, however, as if unable to raise these things, He would touch them and stand there.

3. To pure devotees throughout the world who could understand His activities, the Supreme Personality of Godhead, Krsna, exhibited how much He can be subdued by His devotees, His servants. In this way He increased the pleasure of the Vrajavasis by His childhood activities.

4. Once a woman selling fruit was calling, "O inhabitants of Vrajabhumi, if you want to purchase some fruits, come here!" Upon hearing this, Krsna immediately took some grains and went to barter as if He needed some fruits.

5. While Krsna was going to the fruit vendor very hastily, most of the grains He was holding fell. Nonetheless, the fruit vendor filled Krsna's hands with fruits, and her fruit basket was immediately filled with jewels and gold.

6. Then one time, having seen the great disturbances in Gokul, all the elderly persons among the cowherd men, headed by Nanda Maharaja, assembled and began to consider what to do to stop the continuous disturbing situations in Vraja.

7. At this meeting of all the inhabitants of Gokula, a cowherd man named Upananda, who was the most mature in age and knowledge and was very experienced according to time, circumstances and country, made this suggestion for the benefit of Rama and Krsna.

8. He said: My dear friends the cowherd men, in order to do good to this place, Gokula, we should leave it, because so many disturbances are always occurring here, just for the purpose of killing Rama and Krsna.

10. Then again, the demon Trnavarta, in the form of a whirlwind, took the child away into the dangerous sky to kill Him, but the demon fell down onto a slab of stone. In that case also, by the mercy of Lord Visnu or His associates, the child was saved.

11. Even the other day, neither Krsna nor any of His playmates died from the falling of the two trees, although the children were near the trees or even between them. This also is to be considered the mercy of the Supreme Personality of Godhead.

12. All these incidents are being caused by some unknown demon. Before he comes here to create another disturbance, it is our duty to go somewhere else with the boys until there are no more disturbances.

13. There is a place named Vrndavana. This place is very suitable because it is lush with grass, plants and creepers for the cows and other animals. It has nice gardens and tall mountains and is full of facilities for the happiness of all the gopas and gopis and our animals.

14. Therefore, let us immediately go today. Upon hearing this advice from Upananda, the cowherd men unanimously agreed. Thus they sorted out their household affairs, placed their clothing and other paraphernalia on the carts, and immediately started for Vrndavana. As they rode, they began to chant with great pleasure the pastimes of Krsna.

16. When Rama and Krsna saw Vrndavana, Govardhana and the banks of the River Yamuna, They both enjoyed great pleasure.

17. In this way, Krsna and Balarama, acting like small boys and talking in half-broken language, gave transcendental pleasure to all the inhabitants of Vraja. In due course of time, They became old enough to take care of the calves.

18. Not far away from Their residential quarters, both Krsna and Balarama, equipped with all kinds of playthings, played with other cowherd boys and began to tend the small calves.

19. Sometimes Krsna and Balarama would play on Their flutes, sometimes They would throw ropes and stones devised for getting fruits from the trees, and sometimes, Their ankle bells tinkling, They would play football with fruits like bael and amalaki.

20. Sometimes They would cover Themselves with blankets and imitate cows and bulls and fight with one another, roaring loudly, and sometimes They would imitate the voices of the animals. In this way They enjoyed sporting, exactly like two ordinary human children.
E-mail me when people leave their comments –
Follow