During the protest chanting session, which was well attended by over 500 people, I enacted what I told our organization group I would do. I committed to being a watchdog and an orchestrator of sorts. Through this last week many phone calls were made and internet promotional materials sent to inform our congregants and friends that this gathering was important. Our team was effective. CBC (Canadian Broadcasting Corporation) came and other India-based media networks.

A well-wisher in the crowd came and recommended, “Keep your mask on,” which was a challenge when you’re being interviewed. Another person came to me when I sat in the kirtan and whispered, “The fellow playing the drum behind you is bleeding on his hands.” I paid not too much attention. “It happens,” I replied and that how it is in passionate kirtans. Another concerned congregant came up and said, “Maharaja, the chanting is too happy. Shouldn’t we tone it down?” My reply was, after looking at the chanters, “They look fairly serious to me.”

The person leading the chanting was Ajamila, whose ancestors hail from Bangladesh. He has strong feelings about fundamentalism, which was the cause of his family fleeing to India, leaving behind all their belongings. And so that’s what the demonstration chanting was all about; challenging intolerance and fanaticism, which I’m afraid is a threat to Canada, the U.S. and the world over.

When our chant was completed, I promised the Bangladeshi representatives who had joined, that I would join them in some spot for an evening vigil. From there I walked back to home – the temple ashram – wondering about our beleaguered world. For now, the peaceful but loved and firm approach should send a message. Thanks to other communities who did so well, Vancouver, Winnipeg and Ottawa. 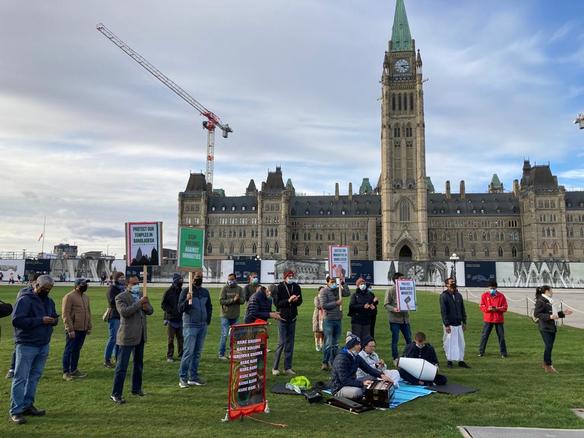