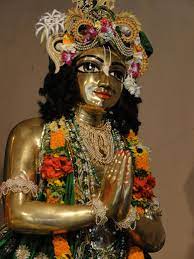 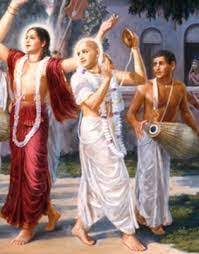 Srila Srivasa Pandit, the fifth member of the Panca-tattva, appeared in Srihatta, West Bengal, about 30 years before the appearance of Lord Gauranga. Srivasa Pandit lived in Navadvip before the advent of Lord Chaitanya.

Living the traditional brahminical life, he and his younger brothers, Srinidhi, Sripati and Srirama, worshipped Lord Krishna, performing devotional service and bathing thrice daily in the Ganges. On his order, they moved to Navadvip and began to associate with the senior and respected Sri Advaita Acharya.

They regularly used to attend the assembly of devotees who gathered at Sri Advaita Acharya’s house to hear the Srimad-Bhagavatam and engage in congregational chanting of the Holy Names.

Srivasa Pandit and his wife Malini Devi became intimate friends of Jagannatha Misra and Sachi Devi. When Lord Visvambhara appeared, the hearts of all the devotees were filled with parental affection for the child. After the birth of Nimai, Malini would regularly visit and give advice to the younger Sachi mata on how to raise her mischievous child.

Srila Vrindavan das Thakur, the Vyasadeva of Sri Gaurasundara’s pastimes, has sung the praises of Srivasa Pandit in this way:

“It was in Pandit’s house that Sri Chaitanya enacted His pastimes of sankirtana. Those four brothers (Srivasa, Sri Rama, Sripati and Srinidhi) were continuously engaged in singing the names of Sri Krishna.” 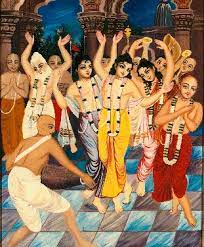 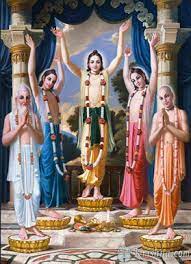