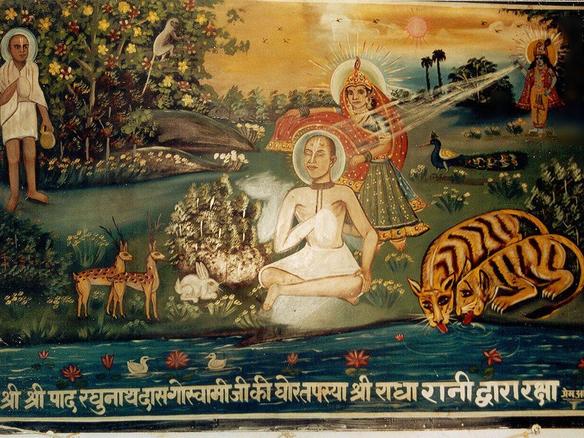 Raghunatha dasa Gosvami used to reside on the bank of Sri Radha-kunda. At the time Radha-kunda was just a small pond of water, and therefore sometimes Raghunatha would meditate on enlarging the kund. Then he would chastise himself for desiring something which would require a large amount of money.

Around this time one very wealthy Seth underwent great austerity by walking to Badarikasrama in the Himalayas. Arriving there he very reverently worshiped Sri Badrinarayana and offered much wealth at His lotus feet. That night as he slept there, he had a dream in which Sri Badarinarayana instructed him to proceed to Vraja, where he should present all his wealth to Sri Raghunatha Dasa Gosvami, who was residing at Aritgram. “If he declines to accept it, then you can mention My name and remind him about renovating Radha-kunda and Syama-kunda.”

That Seth was very happy to have seen such a wonderful dream and after returning to his home he very joyfully set out for Vraja. There he met Raghunatha dasa Gosvami and related all of these events to him. Dasa Gosvami was somewhat taken aback to hear this news, but then immediately gave his consent. Thus Sethji began to work of re-digging the two kunds.

On the banks of Radha-kunda, the five Pandavas were residing in the form of trees. As the work was proceeding it was decided that on the following day these trees would have to be cut down, but that night the five Pandavas appeared in a dream of Raghunatha dasa and forbade the cutting of those dreams. Today they are still residing there. When the work of beautifying the kundas was complete, the devotees bliss knew no bounds.Nearby the kundas, the kunjas of the eight gopies were also constructed. Seeing all this, Raghunatha dasa forgot himself in ecstasy.

Raghunatha dasa Gosvami lived on the banks of Radha-kunda without any fixed residence, staying under a different tree every night. Sometimes he would stay on the banks of the Manasa Ganga. At that time these areas were jungles filled with ferocious animals. One day Sanatana Gosvami came to the banks of Manasa Ganga to meet Gopala Bhatta Gosvami. Before accepting his noon meal at Gopal Bhatta’s bhajan kutir, he went to take bath at the Pavan ghat of Manasa Ganga. From there he saw two tigers come to the kund and after drinking some water saunter off. Just near that spot Raghunatha das Gosvami was sitting under a tree absorbed in his bhajana. Sanatana Gosvami was startled to see this but even more so when he saw Sri Krsna standing at some distance observing everything. He then requested Raghunatha to do his bhajana within a hut.

On another occasion, Raghunatha dasa, who still hadn’t bothered to have a kutir constructed, was sitting in the noon day sun absorbed in his bhajana. Srimati Radharani happened to pass that way at this time and, seeing that the sun was beating down on Raghunatha’s head, she stood behind him and held the end of her sari to shield him from the suns rays. Then one of the Gosvamis came along and saw this heart rending scene, while profuse perspiration continued to flow from Srimati Radharani’s transcendental body. This time when he was again requested to do his bhajan in a kutir, he immediately agreed to comply.

In Vraja, Krsna is served by Radharani and Candravali, who each have unlimited maid servants. According to the mellows of paramour love, Sri Raghunatha dasa Gosvami counted himself as a maidservant of the friends of Srimati Radharani. As Candravali is the chief comperitor of Radharani, Sri dasa Gosvami would never go to her kunja or talk with any of the sakhis. Thus he served the servants of Radharani within his mind in this way.

One Brajabasi known as Sri dasa Brijabasi used to bring Sri das Gosvami a leafcup of buttermilk every day. Drinking this much only Raghunath dasa would engage in bhajana throughout the day. One day Sri Das Brijabasi went to Candravali’s kunda, known as Sakhi-sthali, to herd his cows. There he saw a palash tree with very large leaves, so he collected some leaves to make leafcups. The next day, in one of the new leafcups he brought some buttermilk to das Gosvami. Raghunatha dasa accepted the leafcup of buttermilk and inquired, “Sri dasji, where did you get these nice palash leaves?” Sri dasji replied, “While I was pasturing the cows I came to Sakhi-sthali and found them there.”

Raghunatha dasa Gosvami used to always serve Sri Sri Radha-Govinda in his mind. One day in his meditation he cooked sweet rice and offered it to Sri Sri Radha and Krsna. In great pleasure they accepted the offering and the other sakhis also relished this prasadam. Then Raghunatha himself honored the remnants of their prasadam and in great ecstasy, due to the pleasure of having been able to satisfy Sri Sri Radha-Govinda and Their loving attendants, he ate a little more than was his custom.

In the afternoon Raghunatha dasa used to speak about Sri Caitanya Mahaprabhu. However, this day when the devotees came in the afternoon to hear him speak, they found that the door to his kutir was closed. They waited for some time but when it appeared that there was no movement inside they became a little anxious and called out, “Gosvamiji, are you all right?” Sri dasa Gosvami answered, “My body is not well.”

The devotees became concerned and immediately sent word to Sanatana Gosvami in Mathura. At that time Sri Sanatana Gosvami was staying with Sri Vallabhacarya’s son Sri Vithalnathji, who immediately sent two physicians to Radha-kunda to examine Sr Raghunath dasa Gosvami. After checking his pulse, the doctors concluded that, “due to eating a combination of rice and milk his body is feeling very heavy.”

Hearing this diagnosis everyone was struck eith wonder. That Raghunatha dasa Gosvami, who subsisted on only a little buttermilk each day, should fall ill from eating too much sweet rice was astonsihing, especially because it was eaten only in meditation.

There are various opinions on Sri Raghunath das Gosvami’s identity in Krsna-lila. Some have ascertained that he was Rasa Manjari, some that he was Rati Manjari, while still others that he was Bhanumoti.

The Govardhana-sila given by Sriman Mahaprabhu to Raghunatha dasa to worship is still worshiped at Sri Gokulananda Mandira, in Vrindavana.

Srila Bhaktisiddhanta Sarasvati Thakura writes in his Anubhashya that in the opinion of Sri Caitanya Mahaprabhu, the govardhana-sila, the stone from Govardhana Hill, was directly the form of Krishna, the son of Maharaja Nanda. The Lord used the stone for three years, and then in the heart of Raghunatha dasa the Lord awakened devotional service to the stone. The Lord then gave the stone to Raghunatha dasa, accepting him as one of His most confidential servants. However, some envious people conclude that because Raghunatha dasa had not taken birth in the family of a brahmana, Sri Caitanya Mahaprabhu did not give him the right to worship the Deity directly, but instead gave him a stone from Govardhana. This kind of thought is naraki, or hellish. As stated in the Padma Purana, arcye vishnau siladhir gurushu nara-matir vaishnave jati-buddhih. ..yasya va naraki sah: “One who considers the arca-murti (the worshipable Deity of Lord Vishnu) to be stone, the spiritual master to be an ordinary human being, or a Vaishnava to belong to a particular creed is possessed of hellish intelligence.” If one thinks that the worshipable salagrama-sila is a mere stone, that the spiritual master is an ordinary human being or that a pure Vaishnava preaching the bhakti cult all over the world is a member of a particular caste or material division of society, he is considered a naraki, a candidate for hellish life. When Sri Caitanya Mahaprabhu instructed that the govardhana-sila, the stone taken from Govardhana, is nondifferent from the body of Sri Krishna, the Supreme Personality of Godhead, He indirectly advised such foolish persons that one should not be envious of a Vaishnava who belongs to a different caste or sect. One should accept a Vaishnava as transcendental. in this way one can be saved; otherwise, one is surely awaiting a hellish life. (A.C. Bhaktivedanta Swami Prabhupada. Sri Chaitanya Charitamrta Antya lila 6:294. purport.)

TRANSLATION
Sri Caitanya Mahaprabhu continued, “Worship this stone in the mode of goodness like a perfect brahmana, for by such worship you will surely attain ecstatic love of Krishna without delay. (Sri Chaitanya Charitamrta Antya-lila 6:295.)