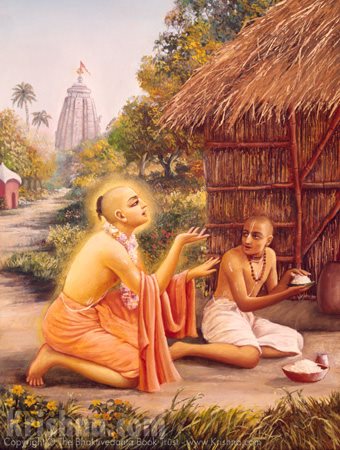 mahaprabhura priya bhrtya — raghunatha-dasa
sarva tyaji’ kaila prabhura pada-tale vasa
Synonyms:
mahaprabhura — of Lord Caitanya Mahaprabhu; priya — very dear; bhrtya — servant; raghunatha–dasa — Raghunatha dasa Gosvami; sarva tyaji’ — renouncing everything; kaila — did; prabhura — of the Lord; pada–tale — under the shelter of the lotus feet; vasa — habitation.
Translation:
Srila Raghunatha dasa Gosvami, the forty-sixth branch of the tree, was one of the most dear servants of Lord Caitanya Mahaprabhu. He left all his material possessions to surrender completely unto the Lord and live at His lotus feet.
Purport:
Srila Bhaktisiddhanta Sarasvati Thakura writes in his Anubhasya, “Srila Raghunatha dasa Gosvam i was most probably born in the year 1416 Sakabda (A.D. 1494) in a kayastha family as the son of Govardhana Majumadara, who was the younger brother of the then zamindar, Hiranya Majumadara. The village where he took birth is known as Sri-krs napura. On the railway line between Calcutta and Burdwan is a station named Trisabagha [now known as Adi-saptagrama], and about one and a half miles away is the village of Sr i-krsnapura, where the parental home of Sr i Raghunatha dasa Gosvami was situated. A temple of Sri Sri Radha-Govinda is still there. In front of the temple is a large open area but no large hall for devotees to assemble. A rich Calcutta gentleman named Haricarana Ghosa, who resided in the Simla quarter, recently repaired the temple. The entire temple compound is surrounded by walls, and in a small room just to the side of the temple is a small platform on which Raghunatha dasa Gosvami used to worship the Deity. By the side of the temple is the dying river Sarasvati.”

“After the killing of Aristasura, Srimati Radhika and Her sakhis exchanged many joking words with Sri Krsna concerning the necessary atonement for one who has committed the offence of killing a bull. As a result, the Queen of Vrndavana, Srimati Radhika, and Her sakhis joyfully excavated and filled Sri Radha-kunda with their own hands. May that immensely fragrant Radha-kunda be my shelter.

“In the land of the hearts of those who bathe in Radha-kunda, a desire tree of the superlative prema, which is not attainable even for Krsna’s principal queens in Dvaraka, will arise. May that supremely charming Radha-kunda be my shelter.

“For the pleasure of Srimati Radhika, even Sri Krsna Himself, yearning to attain Her merciful sidelong glance, regularly bathes in Radha-kunda, carefully observing all the appropriate rituals. May that supremely enchanting Radha-kunda be my shelter.

“May that supremely enchanting Radha-kunda, which the moon of Vraja, Sri Krsna, loves as much as He loves the crown-jewel amongst the sweet girls of Vraja, Srimati Radhika, and which He has made known by the name of Radhika Herself, be my shelter.

“The mercy obtained by serving Radha-kunda makes the desire-creeper of prema for the prince of Vraja sprout and is celebrated for bearing the flower of service to my svamini Srimati Radhika. May that supremely charming Radha-kunda be my shelter.

“Gloriously manifest on the banks of Radha-kunda are eight kunjas named after Radhika’s principal sakhis. Acting as stimuli for the amorous pastimes of the Divine Couple, these kunjas are filled with the sweet humming of bumblebees and are desired by everyone. May that supremely enchanting Radha-kunda be the shelter of my life.

“Situated on an exquisite dais on the bank of Radha-kunda and accompanied by Her beloved sakhis, our svamini Srimati Radhika charmingly engages in sweet, joking words with Sri Krsna, the moon of Vraja. These playful verbal exchanges are enhanced by the suggestion of so many innuendoes. May that Radha-kunda be the shelter of my life.

“May that very charming and especially fragrant Radha-kunda, where intoxicated with love the Divine Couple and the sakhis daily sport with great joy in the water so fragrant with exquisite lotus flowers, be the sole shelter of my life.

“To that devotee who, in a resolute mood of aspiring to serve Srimati Radhika, reads this charming prayer describing Sri Radha-kunda, even in their present body Sri Krsna will quickly grant them darsana of not only His beloved Radhika, but also of Their many variegated amorous pastimes. Witnessing these pastimes and envisioning himself serving Yugala-kisora in various ways, such a devotee will feel immense jubilation. This astaka is recited in the poetic meter known as ‘Malini’.”