All living bodies subsist on food grains, which are produced from rains. Rains are produced by performance of yajna [sacrifice], and yajna is born of prescribed duties.

Srila Baladeva Vidyabhusana, a great commentator on the Bhagavad-gita, writes as follows:

The Supreme Lord, who is known as the yajna-purusa, or the personal beneficiary of all sacrifices, is the master of all the demigods, who serve Him as the different limbs of the body serve the whole. Demigods like Indra, Candra and Varuna are appointed officers who manage material affairs, and the Vedas direct sacrifices to satisfy these demigods so that they may be pleased to supply air, light and water sufficiently to produce food grains. When Lord Krsna is worshiped, the demigods, who are different limbs of the Lord, are also automatically worshiped; therefore there is no separate need to worship the demigods. For this reason, the devotees of the Lord, who are in Krsna consciousness, offer food to Krsna and then eat -- a process which nourishes the body spiritually. By such action not only are past sinful reactions in the body vanquished, but the body becomes immunized to all contamination of material nature. When there is an epidemic disease, an antiseptic vaccine protects a person from the attack of such an epidemic. Similarly, food offered to Lord Visnu and then taken by us makes us sufficiently resistant to material affection, and one who is accustomed to this practice is called a devotee of the Lord. Therefore, a person in Krsna consciousness, who eats only food offered to Krsna, can counteract all reactions of past material infections, which are impediments to the progress of self-realization. On the other hand, one who does not do so continues to increase the volume of sinful action, and this prepares the next body to resemble hogs and dogs, to suffer the resultant reactions of all sins. The material world is full of contaminations, and one who is immunized by accepting prasadam of the Lord (food offered to Visnu) is saved from the attack, whereas one who does not do so becomes subjected to contamination.

The field production is due to sufficient rain from the sky, and such rains are controlled by demigods like Indra, sun, moon, etc., and they are all servants of the Lord. The Lord can be satisfied by sacrifices; therefore, one who cannot perform them will find himself in scarcity -- that is the law of nature. Yajna, specifically the sankirtana-yajna prescribed for this age, must therefore be performed to save us at least from scarcity of food supply. 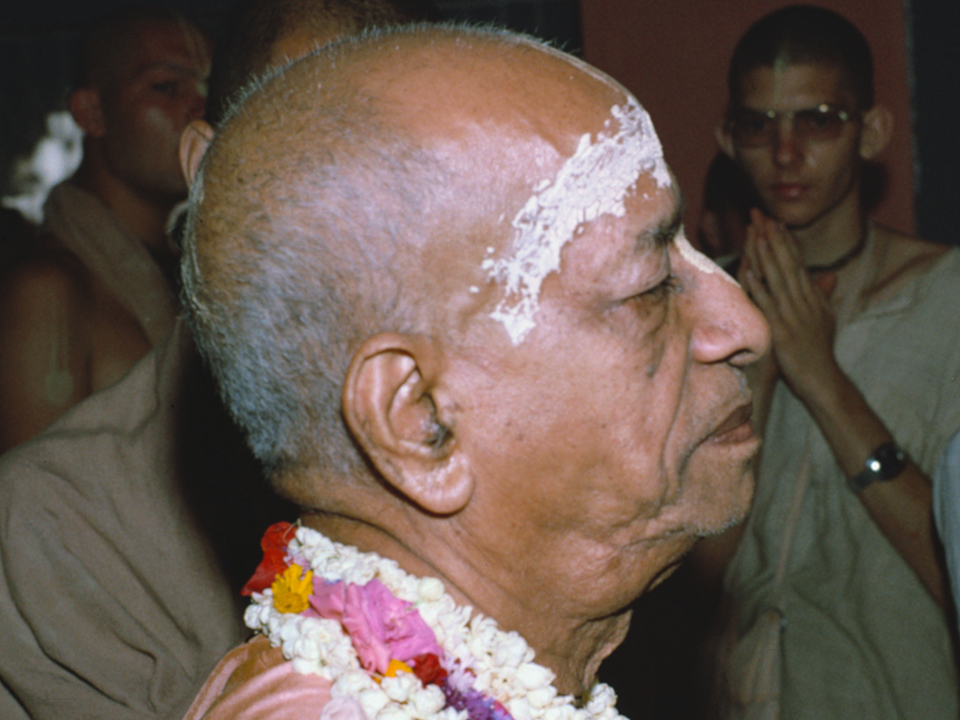 Sria Prabhupada - The Saviour of the whole world