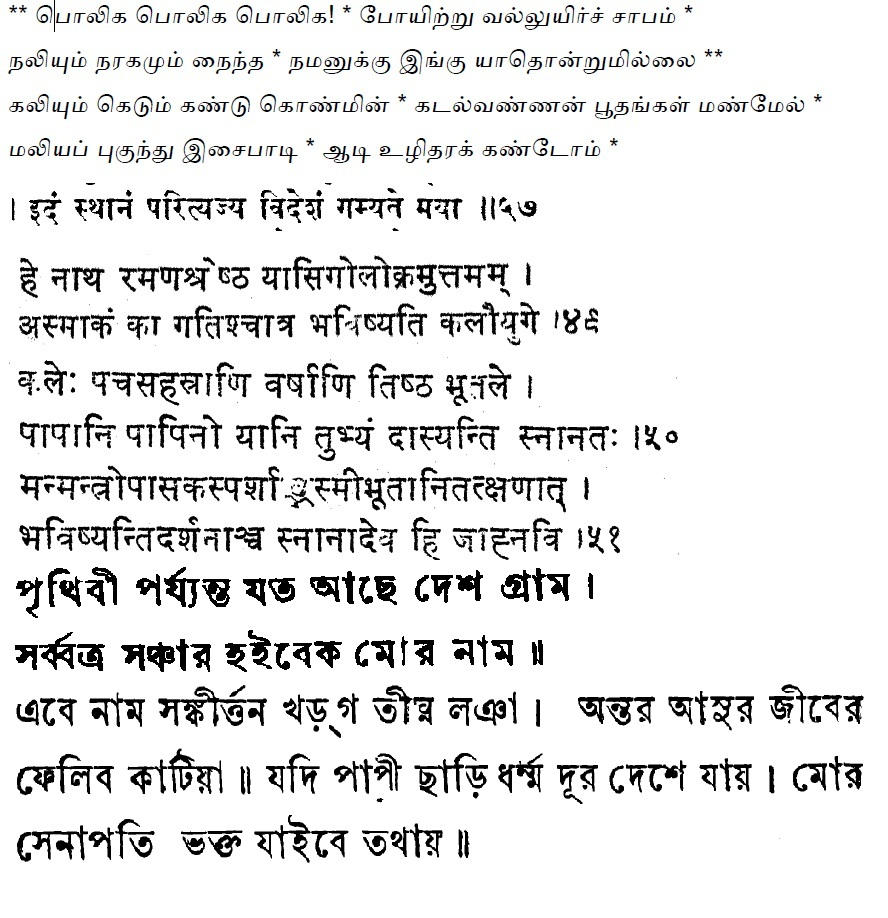 Srila Prabhupada’s appearance and accomplishments are a turning point not only in Gaudiya Vaisnavism, but in the very history of human civilization, so it is not surprising that they were predicted many centuries ago. In several ancient religious traditions, the sacred scriptures usually include passages or whole sections dealing with predictions. Some of these passages are marked by a veiled language and are often interpreted in different ways. Interpretations are subjective and may be relatively taken as correct according to time, place and circumstance, but they are conclusive when properly substantiated by sufficient evidences. The meaning of some of the following verses and statements might have been previously obscure or misunderstood, but since Srila Prabhupada’s deeds were self-evident, unprecedented and matchless, there is hardly any scope to doubt that he is the personality who is being directly or indirectly pointed out here. From diverse sources there is a general prediction that Vaisnavism would be spread throughout the world, so it is also implied that there would be a pioneer preacher. I am sure that there must be many more verses like these and it is just a matter of time until we have a much longer list. This is a short compilation with the original texts and exact references of what we have found so far.

In his Tiruvaymoli (5.2.1), a section of the Divya-prabandha, Nammalvar speaks about a vision he had:

“Victory ! Victory ! Victory ! I behold something wonderful: all the inauspiciousness of the living entities is destroyed, no one is going to hell, Yamaraja has no more any work, and the effects of Kali yuga ceased to exist. This is because all over the world an increasing number of Lord Visnu’s devotees sing His names while dancing and playing musical instruments.”

In the Bhagavata-mahatmya in the Uttara-khanda (194.57) of the Padma Purana, bhakti personified tells Narada muni that after travelling through several places in India, she reached Vrndavana. Then she declares her resolution of leaving from Vrndavana to go to foreign countries:

“Leaving this place, I will go abroad.”

By the end of the Brahma-vaivarta Purana (Krsna-janma-khanda, chap. 129, 49-51) we find the narration of the departure of Lord Krsna from this world and how all the holy rivers headed by the personified Ganges approached Him:

Ganga Devi said: “O Lord, best of lovers, now that You are going to the supreme abode, Goloka, what will be our situation here in this age of Kali?”

The Supreme Personality of Godhead said: “Sinful people will come to you and upon bathing will give you their sins. You must remain like this on earth for 5,000 years of the age of Kali.”

“O Ganga, then there will be many devotees worshipping Me by My mantra, and merely by their touch, glance and bathing all those sins will be immediately burnt.”

“In every town and village of the world, the chanting of My name will be heard.”

In the Caitanya Mangala (Sutra-khanda, song 12, texts 564-565) Lord Caitanya clearly mentions that He will send His leading preacher abroad:

“Taking the sharp sword of the congregational chanting of the Holy Name, I will root out and destroy the demoniac mentality in the hearts of the conditioned souls.”
“If some sinful people escape and giving up religious principles go to
far off countries, then My commander in chief (Senapati Bhakta) will appear to chase them and distribute Krsna consciousness.”

“Lord Caitanya did not advent Himself to liberate only a few men in India. Rather, His main objective was to emancipate all living entities of all countries throughout the entire universe and preach the Eternal Religion…. There is no doubt that this unquestionable order will come to pass…. Very soon the unparalleled path of hari-nama-sankirtana will be propagated all over the world…. Oh, for that day when the fortunate English, French, Russian, German, and American people will take up banners, mrdangas, and karatalas and raise kirtana through their streets and towns! When will that day come? … That day will witness the holy transcendental ecstasy of the Vaisnava dharma to be the only dharma, and all the sects and religions will flow like rivers into the ocean of Vaisnava dharma. When will that day come?”

Devotee (1): We can understand all of your instructions simply by reading your books.

Prabhupada: And in my horoscope there was written there, "After seventieth year this man will go outside India and establish so many temples.(…) I could not understand. "What is this, that I have to go outside India? That is not…" And Guru Maharaja foretold. He told my Godbrothers, Sridhara Maharaja and others, that "He'll do the needful when time comes. Nobody requires to help him." He told in 1935. And after all, this was true(?). Guru Maharaja told. And in the beginning, first sight, he told, "You have to do this."