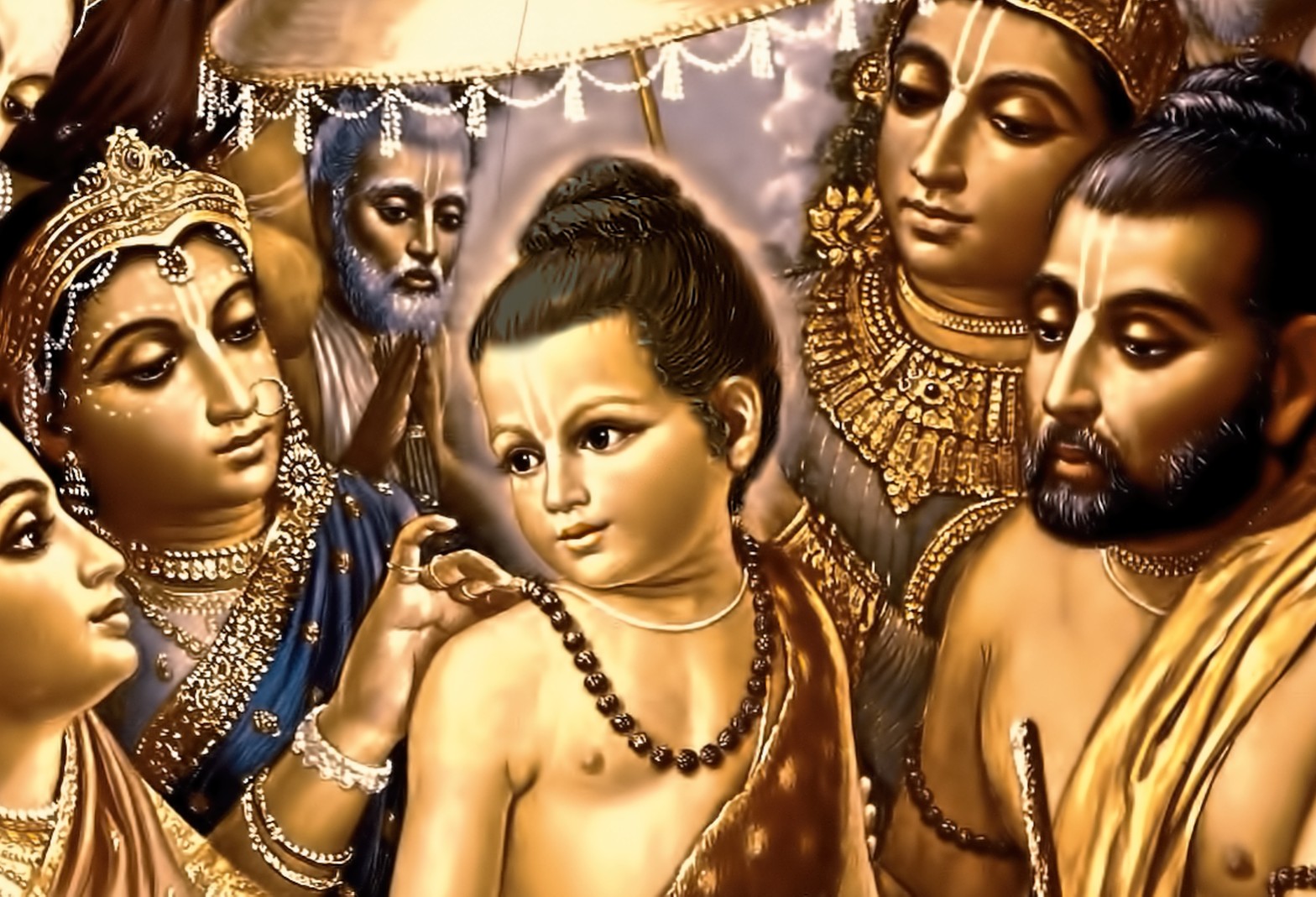 Srila Prabhupada writes to one his disciples about Lord Vamanadeva:

Please accept my blessings. I am in due receipt of your letter dated June 28, 1968, and I thank you very much for it. Regarding Bali Maharaja: He is born in the same atheistic family of Maharaja Prahlada. He happened to be the grandson of Maharaja Prahlada, and as his great grand-father, Hiranyakasipu was very powerful, and as there was animosity between the demigods and the demons, Bali Maharaja also defeated the demigods several times, and was occupying all the planets. At that time Vamanadeva appeared as the son of Kasyamuni. Bali Maharaja was very charitably disposed. Sometimes the atheists are also very charitable. Persons who believe that we are doing pious activities, making charities and welfare work to the human society, why should we bother about God?–such persons even though very moral and pious in the estimation of the material world, are also demons, on account of their apathy for Krishna Consciousness. So, Bali Maharaja was a man of that type. Under the circumstances he was not averse to accept charity and other pious activities. He was being guided by his spiritual master, Sukaracharya. Sukara means the semina. In other words, one claims to become acharya on the principle of being born of a Brahmin father. They may be called sukaracharya, or acharya or preacher not by disciplic succession, but on the right of heredity. In India there are still superstitions that one should be initiated by such sukaracharya family. They are called generally as the jatigosain. Jatigosain means the caste spiritual master. All over India, especially in Bengal, this jatigosain spiritual mastership is very prevalent. But really goswami means one who is master of the influence of different senses, namely the influence of tongue, the influence of mind, the influence of anger, the influence of belly, the influence of genital, and the influence of talking. So one who is master of these influential webs of sense gratification, he is called goswami. Goswami is not by hereditary chart. So Sukaracharya posed himself as such goswami spiritual master. He had many mystic powers, therefore he was considered to be very influential spiritual master of the demons.

So when Vamanadeva appeared, Bali Maharaja was attracted by His beauty as a Dwarf Brahmin, and as he was charitably disposed, he wanted to give Him some charity. But Sukaracharya, being elevated in mystic yogic powers, he could understand that Vamanadeva was Visnu. And in order to favor the demigods, He had come there to cheat Bali Maharaja in the shape of begging some charities. Bali Maharaja was puffed up with his material vanities, and Vamanadeva as He is Visnu, all-peaceful, without interrupting his attitude, just approached him in the form of a Brahmin, Who has a right to beg something from the princely order. And the principle orders also are always disposed, to make charities to the Brahmins.

Question, para. 2, answer: Sukracarya as spiritual master of Bali taught him that everything should be offered to Visnu. But when Visnu actually appeared before Bali, he was afraid of Bali Maharaja’s charitable disposition. He warned Bali Maharaja that this Vamanadeva had come there to take everything from him in the shape of charity, therefore he should not promise Him to give anything. This advice revolted Bali Maharaja because he was formerly instructed that everything should be offered to Visnu, now, why Sukaracharya was asking him not to act by his previous instructions? Sukaracharya was afraid of his own position. He was living at the cost of Bali Maharaja, so if Vamanadeva would take away everything from Bali Maharaja, he was thinking how he would live. That is a materialistic temperament. The materialist does not want to serve or to give to Visnu, because he thinks that by giving away to Visnu he will be put into poverty-stricken condition. This is materialistic estimation. But actually that is not the fact, as it will be evidenced by the dealing of Bali Maharaja and Vamanadeva.

Question 1, answer: That is the materialistic way of worshiping. Materialists are always careful for maintaining his material status quo first, and then please Visnu. Although they profess to be devotees of Visnu. Therefore the Krishna Consciousness persons are greater than such materialistic worshippers. Materialist person perform all pious activities or devotional activities for some material gain, and as soon as there is any hindrance in the path of material gain, they at once become demon. Therefore bhakti means without any material desires. That is the sign of pure devotee. He has no motive to satisfy his material desires by devotional service.

Question 2, answer: That is just his military spirit, that Bali Maharaja says “If He be the illustrious Lord Visnu not desirous of foregoing His own fame, He shall wrest from me this earth after slaying me in battle, or He shall be slain by me.” The last portion of this question is not very clear.

If Jadurani wants to paint the picture of Bali Maharaja, it should be like this: 1) The hall must be very nicely decorated, & princely hall, 2) in one side of the hall, the royal throne should be presented as vacant, and 3) Bali Maharaja should pose himself bowing down before Lord Vamanadeva, and Vamanadeva should be painted with one leg on the earth; and one leg high in the sky; and one leg coming out of his navel, and put on the head of Bali Maharaja. This means the charity of one’s possessions is not full for the Spreme Personality of Godhead, but when one’s personal body and head is given to the service of the Lord, then one becomes perfect in offering everything to the Lord. This is called complete surrender of everything that a devotee may possess.

Bali Maharaja may be shown as not more than 40 years old, very nice looking king, well dressed like the royal order, and with mustache and no beard. Sukaracharya should be wearing a Saivite tilaka, and also Maharaja Bali can have a Saivite tilaka, until after he meets with Vamanadeva, and then you can change Bali Maharaja’s tilaka into a Vaisnava one.

Yes, Pradyumna is typing that 3rd canto and will send you soon. Hoping you are all well.

P.S. While posting this letter, I have received your letter by 2nd July, 1968. I am glad to learn that Kirtana process in the Park is going on well as you received $50.00 last Sunday. This is very encouraging as in N.Y. also they are following the same process with success. I have received one letter from Rayarama as he is not going to Boston but he is in L.A. He will write you. Regarding immigration, I am sending here with the copy of the letter addressed to Mr. Hamilton. I think you should see Mr. Hamilton & take from him written letter advising me the right direction. I don’t want to see the U.S. Counsel.