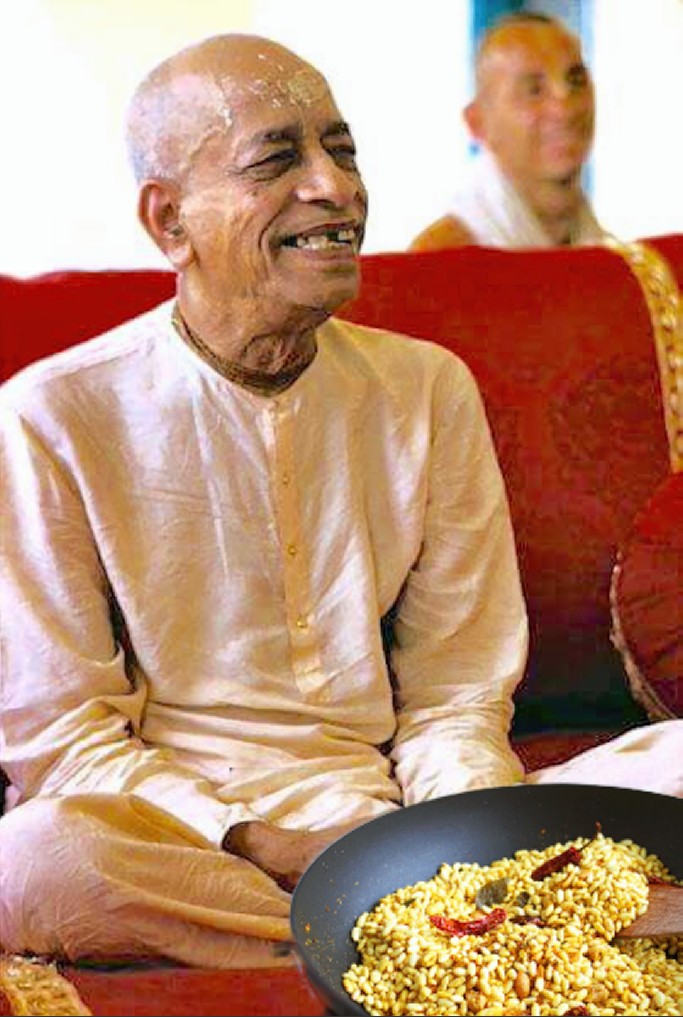 One evening Srila Prabhupada called me into his room.

“This evening you can make me some puffed rice and peanuts,” he said. “It will fill me, but it is not heavy. What I ate last night made it difficult for me to get up and do my translating work. With puffed rice there is no indigestion.”

I brought it to his room along with hot milk that was sweetened with sugar. Shortly after he finished his meal he called me in and told me it was time for his massage.

For his evening massage he either sat up or lay on his back. While in his Juhu flat I sat on his bed beside him because the mosquito net surrounded his bed. The room was very peaceful.

“My mother, she made very first-class puffed rice,” he said as I massaged his legs. “She had a special wok. A very thick wok, so you could make it hot. You put sand in the wok and fire it very hot. You would throw the rice in and mix it up. It would puff in the hot sand. Then you sifted it so all the sand would fall through. When sifting, you had to be sure and clean it very well until all the sand was gone.”

He stopped for a moment and then continued, “She would give it to us often. This puffed rice is very nice. She was a first-class cook. Everything she made, she made nicely. It was natural. My sister also, she was a very good cook, from watching my mother. In the Vedic society it was the woman’s duty. All day the women were engaged in cooking. The husband and children, they took nice prasadam and everyone was happy.

The woman’s day was spent cooking and drying out foodstuffs. Storing and preparing all different kinds of foodstuffs and cooking down milk and making ghee. In this way they were all very expert. In the Vedic culture, whenever there was some gathering, all the women would get together. Whatever feast there was, everyone would bring something. In this way they could have big festivals.”

Still absorbed in his childhood pastimes he continued, “When we were young there was no want of food. We always had plenty of food. In mango season we would have a bushel basket of mangos in the house. When we were children, we would run through the house, playing.

We would grab mangoes as we were running through. All through the day we could eat mangos. It wasn’t you had to think, ‘Oh, can I have a mango?’ Plenty of food was there. So life was simple. My father, he didn’t talk much, but he always provided enough food. There was no difficulty.”
–Srutakirti dasa

Source:http://www.dandavats.com/?p=17446
E-mail me when people leave their comments –
Follow