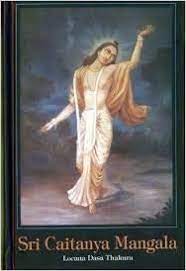 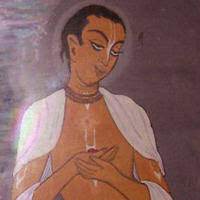 Sri Locana dasa Thakura took birth in a family of Rarhiya physicians who resided in the village of Kogram, within the Mahakumar (Katna) district of Barddhaman. His guru was Sri Narahari Sarkar Thakura.

His father’s name was Sri Kamalakara dasa and his mother’s name, Sri Sadananda. He was the only son of his parents. He was raised in his maternal grandfather’s home and his education was completed there. When he was only a little boy, he enjoyed the good fortune of meeting the devotees of Sri Gauranga.

The book that he composed, Caitanya-mangala, was from the diary of Sri Murari Gupta. “Murari Gupta, who resides at Nadia, composed many beautiful verses about the life of Sri Gauranga. These include the youthful pastimes of Nimai, which Murari Gupta personally took part in, and His later pastime in Nilacala, after He accepted sannyasa, which were narrated by Sri Damodara Pandita.”

In his Caitanya Mangala, Srila Locana Dasa Thakura has written: “My hope of hopes is to be near the lotus feet of Sri Narahari Thakura, to serve and worship him with my very life. The cherished desire of the fallen Locana Dasa is to be allowed by the grace of Narahari to sing the glories of Sri Gauranga. My Lord is Sri Narahari Thakura and I am his servant. Bowing and praying before him I beg him to allow me his service. This is my only aspiration.” 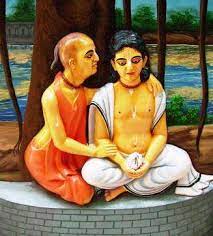