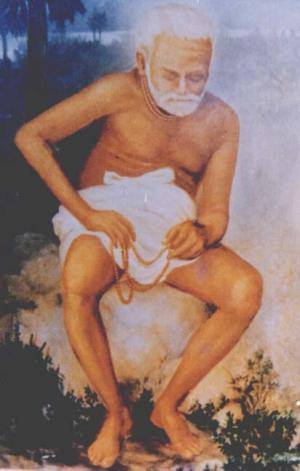 “Srila Jagannatha dasa Babaji Maharaja was respected by all the Vaisnava community and was thus known as Vaisnava Sarvabhauma, or chief amongst the Vaisnavas. There are some nice stories connecting him with the finding of Sri Caitanya Mahaprabhu’s birthplace recorded in Sri Navadwipa Dhama Mahatmya.

Srila Jagannatha dasa Babaji Maharaja was born around the year 1800 AD. He spent many years in Vrndavana where he became famous as a perfect devotee, though more than this is not known of his early years and pastimes. What we do know, however, is that he was particularly enthusiastic in serving the Lord’s devotees and performing ‘kirtan’. In later life his servant, Bihari Lal, used to carry him on his shoulders in a basket, though when he would hear a ‘kirtan’ or himself be engaged in ‘kirtan’, his body would extend itself out of the basket like a beautiful banyan tree and he would loudly shout, “Nitai ki nam eneche re! Nitai, ki nam diteche re!” “O Lord Nityananda, what a wonderful name you have brought! O Nitai, what a wonderful name you have given!”

The stories which I will now relate are at the time when he was more than 120 years old. Living in a tent at Sri Navadwipa with Bihari Lal, his servant, he would eat ‘prasadam’ from a large brass plate which someone had given as a donation. A litter of puppies which had taken birth nearby began to come and eat off Jagannatha dasa Babaji Maharaja’s plate, but he did not object. After a few days however, Bihari Lal saw what was happening, and disgusted to see the dogs eat from his ‘gurus’ plate, he drove them away. Jagannatha dasa Babaji chastised Bihari Lal angrily saying, “If the dogs can’t eat I won’t eat!” His servant had to search out and bring back the puppies, and as they joined Babaji Maharaja again over his plate he exclaimed, “All glories to the ‘dhama’ dogs!” Thus he always displayed his great respect for all the residents of the holy ‘dhamas’. On another occasion he had his servant purchase two hundred rupees worth of ‘rasagulas’ and instructed him, “Feed them to all the ‘dhamas’ cows, but don’t give one to those rascal ‘sahajiya babajis’ (pretenders).”

Srila Jagannath dasa Babaji Maharaj was such a great devotee that the famous Bhaktivinoda Thakura (Kedarnath Datta) called him the commanding chief of the devotees. When Srila Bhaktivinoda was looking for the actual place where Sri Caitanya Mahaprabhu’s birthplace was, he asked Jagannatha dasa Babaji Maharaja to go with him. During the many changes in the course of flow of the mighty Ganges River, some parts of the sacred ‘dhama’ of Navadwipa (nine islands) had changed. The Ganges had revealed old and lost places and reclaimed new ones. To his surprise Bhaktivinoda Thakura discovered that the modern day city called Navadwipa was not more than 100 years old and therefore wasn’t the Navadwipa of Sri Caitanya. Some said the birth site was on a place now in the Ganges, while some said it was in the city of Navadwipa. Dissatisfied, Bhaktivinoda pushed on looking. He found some antiquarian maps and government records, and authentic books written at the time of Lord Caitanya, all of which agreed that Mayapur Navadwipa Dhama is situated on the east bank of the Ganges. To Bhaktivinoda’s amazement he found several large mounds covered with sacred Tulasi plants on land owned by Mohammedans. It was shrouded with local rumours of strange lights and sounds, so the owner, believing it to be haunted, would not go there. Many old babajis of the time, however, believed this to be the actual birthplace of Sri Caitanya Mahaprabhu. Convinced it was true, Bhaktivinoda, inspired by Jagannatha dasa Babaji, went there to the spot, with Jagannatha dasa Babaji being carried in his basket.

Due to his old age, Srila Jagannatha dasa Babaji couldn’t open his eyes, but had to forcibly open them with his fingers, what to speak of walk. If he went anywhere he was carried in his basket by Bihari Lal, but upon arriving at the transcendental site, he leapt out of the basket and danced in ecstasy shouting, “Haribol!” and “Gauranga!”, definitely establishing it to be the very same birthplace of Lord Caitanya.

“I offer my respectful obeisances unto Sri Jagannatha dasa Babaji Maharaja, who is respected by the entire Vaisnava community and who discovered the place where Lord Caitanya appeared.”

Srila Jagannatha dasa Babaji Maharaja had a disciple named Bhagavat dasa Babaji Maharaja, and Gaura Kisora dasa Babaji was his disciple. However at this time there was another great exponent of Vaisnava teachings that, on passing, we have already mentioned. His name is Srila Bhaktivinoda Thakura. And so the line again divides like this:”