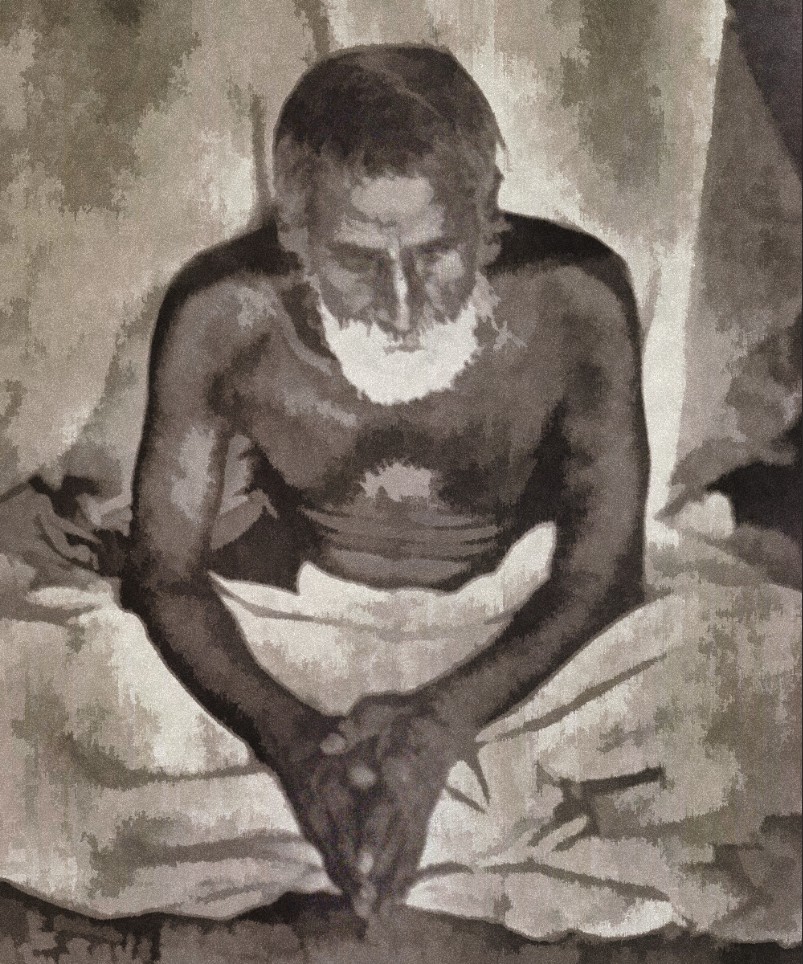 There Gaurakisora resided on the banks of the Ganges and practiced devotional service with intense devotion and renunciation. Because materialistic men would come and disturb him with their desires for mundane blessings (asirvada), the babaji began to stay by a municipal lavatory, where the filth and obnoxious smells would discourage unwanted visitors. There he would chant in peace—in ecstasy. He would beg alms and cook in discarded clay pots, or eat parched rice with green chilies, or just ingest Ganges mud. Sometimes he would collect the discarded cloth from the crematorium, wash it in Ganges water, and use it to cover himself. His only desire was to be absorbed in the mellow of the holy name—in Krishna consciousness.

Srila Bhaktisiddhanta Sarasvati Thakura was highly literate. By the age of seven, he had memorized the entire Bhagavad-gita and could even explain its verses. He had a photographic memory, and in school he read all the books in the entire library. Just by reading them once, he could remember every word, and so the library purchased new books just for him. By the age of twenty-five, he had written numerous articles and published a book, Surya-siddhanta, for which he was awarded the title “Siddhanta Sarasvati.” So, he was highly educated and literate, whereas Srila Gaurakisora dasa Babaji Maharaja was hardly educated or literate at all.

Srila Prabhupada remarked that Gaurakisora dasa Babaji was illiterate and could not even sign his name, yet he became the spiritual master of Sarasvati Thakura, the best scholar of his time. And thus he proved the statement of the Vedas:

“Only unto those great souls who have implicit faith in both the Lord and the spiritual master are all the imports of Vedic knowledge automatically revealed.” (Svetasvatara Upanisad 6.23)

Although Gaurakisora dasa Babaji was hardly educated or literate, learned scholars and public servants would approach him with their questions on Srimad-Bhagavatam and other shastras, and, with his realized knowledge, he would answer their questions to their full satisfaction. Sometimes devotees would read various scriptures for him and he would comment on them from his deep spiritual realization.

Still, out of his great humility, Srila Gaurakisora dasa Babaji Maharaja refused to accept any disciples; Srila Bhaktisiddhanta Sarasvati Thakura was the only exception.

Gaurakisora dasa Babaji enjoined Bhaktisiddhanta Sarasvati never to go to Calcutta, which he considered “a bastion of Kali-yuga.” So Bhaktisiddhanta Sarasvati remained in Mayapur. In 1905 he took a vow to chant the Hare Krishna mantra a billion times. Residing in a grass hut near the birthplace of Lord Chaitanya, he chanted the Hare Krishna mantra day and night. He cooked rice once a day in an earthen pot (or just parched the rice in the sun) and ate nothing more. He slept on the ground, and when the rainwater leaked through the grass ceiling, he sat beneath an umbrella, chanting. Locked in a small room, he chanted japa day and night, day after day, month after month, year after year. Finally, when he had completed his quota, he felt that he was ready to come out and preach. And to preach he went to Calcutta.

So, we pray to Srila Gaurakisora dasa Babaji:

He is saksad-vairagya-murtaye, the personification of renunciation (vairagya); and vipralambha-rasambodhe, always merged in the ocean of the mellow of separation from Krishna (vipralambha-rasa). Padambhujaya te namah: “I offer my respectful obeisances unto his lotus feet.”

That was the mood of Srila Gaurakisora dasa Babaji Maharaja: he was always merged in that nectarean ocean of devotion in separation, and he had no care for his body or for anything material—just hari-nama.

He wrote a beautiful song that is completely in the mood of Raghunatha dasa Gosvami. It is said that of the Six Gosvamis, Raghunatha dasa was the most attached to the service of Srimati Radharani—that he had the most intense desire to serve Srimati Radharani—and Gaurakisora dasa Babaji wrote a beautiful song in that mood. He begins with a refrain: kotai go premamayi, radhe radhe, radhe radhe—“Where is Radha, so full of love? Radhe, Radhe, Radhe, Radhe!” Then he proceeds to express the mood of Raghunatha dasa Gosvami in separation from Radharani, desiring and aspiring for Her service.

When Srila Gaurakisora dasa Babaji Maharaja left this world, there was some dispute over what would happen to his body. His samadhi would of course become an important place of pilgrimage, and some of the heads of the local Vaishnava centers saw this as an opportunity to raise money—for their mathas and even for their own sense gratification. Srila Bhaktisiddhanta Sarasvati ran to the site, but when he arrived, some of the local babajis objected: “He is not a sannyasi; how can he give samadhi to such an exalted and renounced personality?” But Srila Bhaktisiddhanta Sarasvati responded forcefully: “I am the only disciple of Babaji Maharaja, and although I have not accepted sannyasa, I am a celibate brahmachari, not secretly addicted to abominable habits or involved with illicit activities. Who among you can say that in the last year he had no sex or illicit contact with a woman? Please step forward.” Everyone was silent. Then he challenged, “Who has refrained for the last six months?” Everyone was silent. Next, “For the last three months?” Again, silence. “For the last one month?” Silence. “The last three days?” Still silence. They had been exposed and humbled. Not one of the babajis was fit to even touch the transcendental form of Srila Gaurakisora dasa Babaji Maharaja, and one by one they walked away.

Even then there remained some question about how to handle the body, which was still lying on the ground. Out of his great humility, Srila Gaurakisora dasa Babaji Maharaja had instructed that when he departed, his body should be dragged through the streets of Navadvipa so that it would be bathed in the dust from the feet of the Vaishnavas who had walked the holy ground of the dhama. So, some of the townspeople proposed to take the body and drag it through the streets of Navadvipa. Such fools! Such rascals! But Bhaktisiddhanta Sarasvati Thakura stopped them. “Although we are fools and offenders,” he said, “still we can try to understand the true meaning of Babaji Maharaja’s humble request. After the departure of Thakura Haridasa, Lord Chaitanya Himself took the spiritually blissful body of the Thakura on His lap and danced. Following the divine example of Mahaprabhu, let us also bear Babaji Maharaja’s blissful body on our own heads.”

So, Srila Bhaktisiddhanta Sarasvati took charge of the body and placed it in samadhi on the western side of the Ganges, across from Mayapur. In time, the river’s course changed and its waters threatened the area of the samadhi. So Srila Bhaktisiddhanta brought the samadhi to Mayapur, to his matha. There he had created a replica of Vrindavan, with tamala trees and kadamba trees, with Syama-kunda and Radha-kunda, and with a small Govardhana Hill made of govardhana-silas. Most appropriately, he placed the new samadhi by the side of Radha-kunda, and that is where the transcendental remains of Srila Gaurakisora dasa Babaji still rest today. One can go there and pray to him and feel his presence and get his mercy.

Srila Gaurakisora dasa Babaji Maharaja is an ocean of mercy (all pure Vaishnavas are). I pray that he will help me to chant the holy name, to chant with taste. When I prayed to him earlier—and this may just be my speculation—I imagined that he said, “You must give up your offenses.” Then I was thinking, “What offenses?” And then I imagined that he answered, “You must chant with attention.”

Of course, Srila Bhaktivinoda Thakura does state that inattentive chanting is the root of all other offenses and that, conversely, attentive chanting will destroy all the other offenses. “But how do I do that?” I asked. And the answer came: “You must try. You just have to make the effort.” And I suppose that is always the process—that we make our honest effort and depend on the mercy of the acharyas and Krishna.

In my case, however, my chanting sometimes becomes such a routine that I do not even make the effort to hear every word or every mantra. I just do it. I just go through the motions. So, I guess that is my challenge, my special order—to chant with attention.

Devotees often raise the question of chanting with quality. When on a morning walk a disciple asked Srila Prabhupada, “How can we chant with quality?” Prabhupada replied, “The quality will come. For now, just chant as a matter of duty; chant your sixteen rounds. When the quality comes, there will be no force. You will have taste, and spontaneously you will desire, ‘Why sixteen rounds? Why not sixteen thousand rounds?’ Rupa Gosvami desired, ‘How shall I chant with one tongue and hear with two ears? Had I billions of tongues and trillions of ears, then I could relish chanting.’ ”

Srila Prabhupada said that quality means asakti, attachment, and that Chaitanya Mahaprabhu showed this quality: “Sunyayitam jagat sarvam govinda-virahena me: ‘Oh, I do not see Govinda. The whole world is vacant.’ Sunyayitam jagat sarvam govinda-virahena me. This is quality.” When one feels viraha-bhava, when one feels separation from Radha and Krishna, one is chanting with quality.

Srila Gaurakisora dasa Babaji is an ocean of mercy, and we pray for his grace.