Srila Gaura-Kisora dasa Babaji is the spiritual master of Bhaktisiddhanta Sarasvati Thakura. He was born in a vaisya family in a small village beside Padma River in Bangladesh. Following his father, he earned his livelihood by selling grains. He was devotionally inclined from childhood and spent many hours singing bhajans and hearing Krishna-katha. He was married very young but when his wife died in 1849, he immediately left home and went to Vrindavan. For the next 30 years he lived in Vrindavan wandering around the forests and pastime places of Srimati Radharani and Lord Sri Krishna while absorbed in chanting Holy Names:

He would lie prostrate, offering his humble obeisances to the residents of Vraja, considering them as embodiments of Lord Krishna. During this time he took Babaji initiation from Bhagavata dasa, a disciple of Srila Jagannatha dasa Babaji.

Srila Gaura-Kisora dasa Babaji was a renunciation personified. He chanted 200,000 names of Lord each day and stayed in isolated places, eating only what would come of its own accord and sleeping wherever he found himself at night time. He had very few possessions: Tulasi-mala (Tulasi beads) around his neck; another Tulasi-mala on which he chanted; and a few books such as Narottama Dasa Thakura’s Prarthana and Prema Bhakti Chandrika. He refused service from anyone and would not let anyone serve him, though many tried. In 1894, he heard that Lord Caitanya’s birthplace has been discovered and so he came to Navadvipa-Mayapur Dhama, knowing the two Dhamas are non-different.

In Navadvipa-Mayapur, he again wandered around the places of the Lord’s pastimes absorbed in ecstasy of separation. His renunciation was intense and genuine. He would dress himself in the discarded cloth used to dress corpses, beg rice from householders, and cook with discarded earthen pots. He would dance on the banks of the Ganges chanting the Holy Names of Krishna; at other times he would lie on the ground unconscious. Others tried to imitate Gaura-Kisora dasa Babaji’s renunciation wanting to gain fame for themselves, but they all fell away into disgrace.

In 1908 Srila Gaura Kisora Dasa Babaji lost his sight. He refused attempts to take him to an eye specialist, preferring instead to chant and worship Lord Krishna. He stopped travelling at this point. He would sit in his bhajana-kutir deeply absorbed in Krishna’s pastimes.

ANYTHING TO AVOID MATERIALISTS

Srila Gaura Kisora Dasa Babaji encountered many disturbances to his Hari-bhajana from the materialists who sought benedictions from him. They all received heavy instructions from Babaji, but very few were able to understand that these instructions were actually for their eternal benefit.

One time Babaji Maharaj arrived at the house of Srila Bhaktivinoda Thakura dressed in very expensive clothes. When asked about this, he explained people would think he is bogus and so not come to him for benedictions.

At other times he sat on the porch of a prostitute’s house to avoid people, and lived under an upturned boat hoping no one would find him there.

During the last 6 months of his life, he resided in an abandoned latrine (converted into a room) in a dharmasala to avoid the materialists and concentrate on chanting the Holy Names: HARE KRISHNA HARE KRISHNA KRISHNA KRISHNA HARE HARE / HARE RAMA HARE RAMA RAMA RAMA HARE HARE . He left this world at this dharmasala on 19 November 1915 on Utthana Ekadasi, at the end of the Kartika vrata. 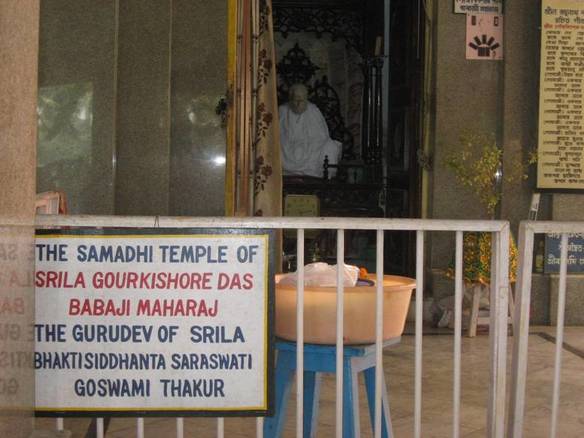 AT “SVANANDA SUKHADA KUNJA”, THE HOUSE OF SRILA BHAKTIVINODA THAKURA

THE DISAPPEARANCE OF SRILA GAURA-KISORA BABAJI

On 19 November 1915, on Utthana Ekadasi in the Kartika-vrata, Srila GauraKisora dasa Babaji re-entered into his eternal loving pastimes with the Supreme Lord Sri Krishna. After Srila Bhaktisiddhanta Sarasvati Thakura had heard of his disappearance, he went to the place where Srila Gaura-Kisora lived. At that time different persons from different temples in the area began to fiercely argued to claim the spiritual body of Srila Babaji. But Srila Bhaktisiddhanta Sarasvati Thakura obstructed them from doing so. The inspector of the police of Navadvipa arrived at the scene.

Srila Bhaktisiddhanta in a voice as deep as thunder said, “I am the only disciple of Paramahamsa Babaji Maharaja. Even though I have not accepted sannyasa, I am a celibate brahmacari and by the grace of Babaji Maharaja I am not secretly addicted to abominable habits or involved in fornication as some monkey-like people are. If there is someone amongst the people here present who is a renunciate of stainless character, then he can have Babaji Maharaja’s samadhi. We have no objection to that. He, who within the last year, or the last six months, three months, one month or at least within the last three days, has not had illicit connection with a woman will be able to touch this spiritual blissful body. If anyone else touches it he will be completely ruined. ”

Hearing this, the superintendent of police said, “How is it that he can prove this?”

Srila Bhaktisiddhanta Thakura replied, “I have faith in their word“.

At this, one-by-one all the bogus babajis slipped away without a word. Srila Bhaktisiddhanta Sarasvati then claimed the samadhi.

After this, several persons approached Srila Bhaktisiddhanta Sarasvati Thakura and said, “Before Srila Gaura-Kisora disappeared, he requested that his body be bound with ropes and be dragged through the streets of Navadvipa Dhama, and thus, be bathed in the dust of the Dhama. Therefore, we should follow these instructions of Srila Babaji Maharaja .”

Then Srila Bhaktisiddhanta Sarasvati Thakura spoke up and said, “My spiritual master, on whose shoulders reside the Supreme Lord Krishnacandra, has said this in a very, very deep mood of humility in order to destroy the pride of those persons who are opposing the Supreme Lord. Even though we are inexperienced, foolish and offensive, still, I will not let his instruction be misinterpreted. Sri Caitanya Mahaprabhu took the spiritual body of Srila Haridasa Thakura, when he disappeared, on His lap and began to dance. Just see how his glories have been described. So therefore, we are also following in the footsteps of Lord Caitanya. Place the transcendental body of Srila Gaura-Kisora above our heads.”

According to the regulations from the Samakara Dipika, Srila Bhaktisiddhanta Sarasvati Thakura with his own hands prepared the samadhi of his spiritual master. His Samadhi was on the western bank of the Ganga in Kuliyagrama at the place called Mutanchada in the present town of Navadvipa. Later on, by the desire of Srila Gaura Kisora dasa Babaji, the place of his samadhi gradually became engulfed by the changing current of the Ganga. When the samadhi was within very close proximity to Ganga Devi, in 1932, his samadhi was moved under the instructions of Srila Bhaktisiddhanta Sarasvati Thakura, from that place to a place in Sri Mayapur Dhama where the Caitanya Math is presently situated. Next to Sri Sri Gandharvika-Giridhari Temple inside the Sri Caitanya Math campus is the Srila Gaura-Kisora Dasa Babaji’s samadhi temple.

#1) Srila Gaura-Kisora dasa Babaji’s samadhi is at Sri Caitanya Math on Bhaktisiddhanta Sarasvati Marg, which is about 3kms from ISKCON Sri Mayapur Candrodaya Temple or half km from Srivasa Angan (the house of Srivasa Pandita).