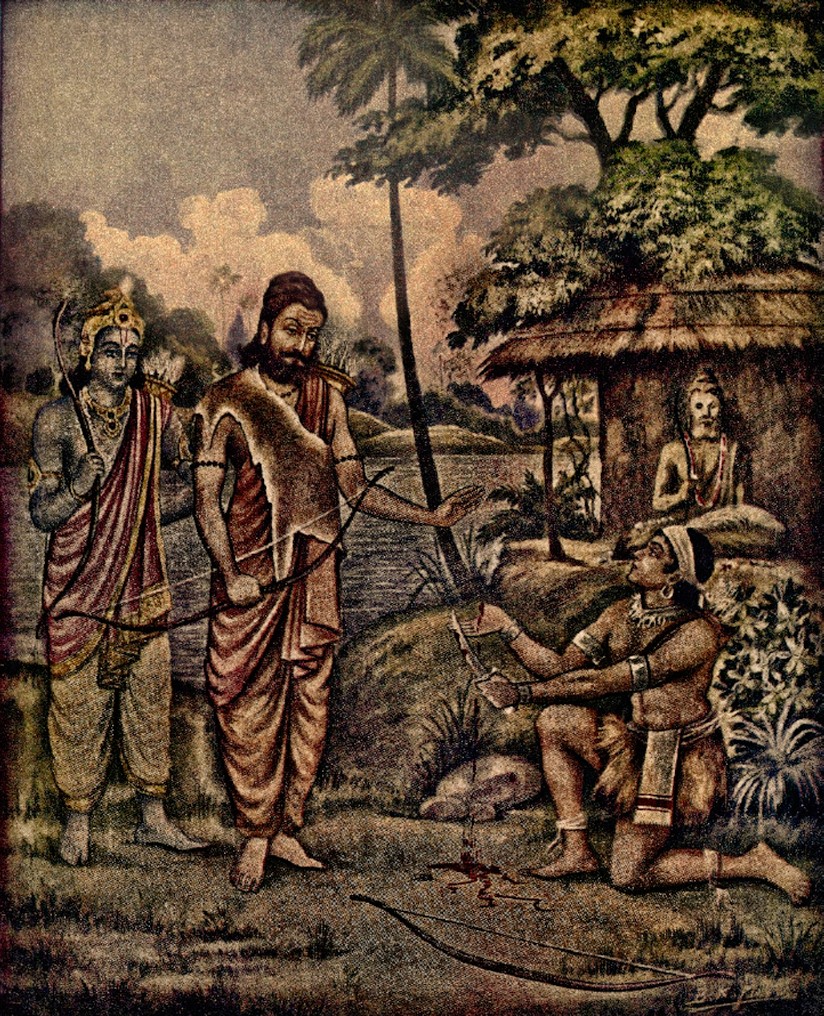 In his book of essays, entitled Upakhyane Upadesa, “Instructions in Stories” (Gaudiya Mission 1936), Srila Bhaktisiddhanta Sarasvati Thakura gives the following commentary on the story of Ekalavya: The translation from the original Bengali is by H.H. Bhakti-caru Svami.

To many people, Ekalavya’s devotion to his guru is ideal, but there is a special consideration…What was Ekalavya’s fault? That should be considered. Wearing the mask of guru-bhakti (devotion to the guru), Ekalavya actually revolted against his guru. Whether his guru was actually considering him to be disqualified by birth in a low-class family, or was simply testing him– for whatever reason–when his gurudeva refused to teach him the art of Dhanur Veda, it was Ekalavya’s duty to accept the instruction of his spiritual master. But Ekalavya did not like that. He wanted to become great. Externally, without a guru his work would not be considered bona fide, or perhaps it was not possible to become great without accepting a guru. It was with these considerations that Ekalavya formed an imaginary or clay material form of the guru.

Actually, his main intention was to learn Dhanur Veda and become great. In this way he wanted to satisfy his own senses. He did not want to sacrifice himself to the will of his guru. That was not his honest desire.

Some may say that ultimately Ekalavya accepted the cruel order of his guru without a protest. But if we consider this issue more carefully, and deeply, we can see that Ekalavya considered mundane morality to be greater than transcendental devotion. It is a moral code that when the guru wants some daksina one must offer it to him, and this sense of morality inspired Ekalavya to cut off his thumb. He did not offer it with spontaneous devotion. (Otherise he would have accepted the guru’s first order.)

Devotion is simple and spontaneous. If Ekalavya had unconditional and natural devotion for Hari (God), guru, and Vaisnava (the devotee of the Lord), then the guru, Dronacarya, and the best of Vaisnavas, Arjuna, and the Supreme Personality of Godhead, Krsna, would not have been dissapointed in Ekalavya’s behavior. Ekalavya’s endeavor to learn Dhanur Veda and his desire to become great were not accepted by his guru. In the core of Ekalavya’s heart, he desired to become better than the best of Vaisnavas, Arjuna. The desire to become greater than the Vaisnavas is not devotion. It is nondevotional, and this is the principle of the Sahajiya sampradaya.

By mundane consideration, this kind of desire to become great is a good desire. But devotion is the effort to remain behind the Vaisnavas and to remain submissive to the Vaisnavas. Ekalavya wanted his skill to be greater than that acquired by learning the Vedic wisdom directly from a bona fide spiritual master. Arjuna showed Ekalavya his wrong approach to learning the Vedic science. If Arjuna had not mercifully pointed that out to him, then the glories of impersonalism would have prevailed. People would have created their imaginary, mundane, unconscious gurus, and learned different sciences and devotions, instead of approaching a bona fide guru.

So Arjuna took care that such an atheistic principle was not established. Therefore Arjuna was not envious of Ekalavya. It was actually a manifestastion of his causeless mercy toward Ekalavya and the whole world. If Ekalavya had been an unalloyed devotee of his guru, then Krsna would not have destroyed such a guru-bhakta, such an earnest disciple of the guru. Krsna always protects his devotees. But Ekalavya was killed by the hand of Krsna. That’s what finally happened to Ekalavya. Sri Caitanya Mahaprabhu said that we cannot judge a devotee just by seeing his external austerities. The demons also perform austerities, and the demigods cannot perform austerities as much as the demons.

Ekalavya wanted to become greater than a Vaisnava, against his guru’s desire. That is why he was killed by Krsna and ultimately attained impersonal liberation. Only the demons are killed by Krsna. Devotees are always protected by Krsna. Hiranya-kasipu and Prahlada are the proof. Therefore we should never try to become greater than Vaisnavas and, wearing a mask of guru-bhakti, actually become an impersonalist. That is what we should learn from the example of Ekalavya. Proficiency in performing activities is not a symptom of devotion to the guru, or guru-bhakti. Bhakti means to remain subordinate and submissive to the Lord’s loving servants, the Vaisnavas.