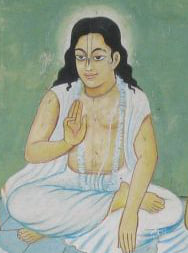 Shri Ramachandra Kaviraja was the disciple of Shrinivasa Acharya Prabhu and the very intimate friend of Narottama dasa Thakura. His father was Chiranjiva Sena and Mother Shri Sunanda. Chiranjiva was originally an inhabitant of Kumara nagar but after marrying the daughter of Shri Damodara Kavi he moved to Shri Khanda.

“Chiranjiva Sena was a pure Devotee very much loved by Narahari Sarkar and the other residents of Shri Khanda. He was extremely learned in all matters and his wife was very chaste and gentle. Her activities were completely transcendental.” [C.C Mad. 11/92]

Chiranjiva was from a family of physicians. His two jewel-like sons were Ramachandra and Govinda. Later they both became disciples of Acharya Prabhu and came to reside at Teliya Bhudari-gram in Murshidabad.

“Ramachandara Kaviraja was especially earnest, beautiful, intelligent, energetic, and enthusiastic,” said one biographer. Although married, Ramachandra and his wife, Ratanala, had no material attachments. They stayed fully engaged in the loving service of Shri Chaitanya Mahaprabhu. They had no children. With steadfast devotion he served his spiritual master, Shrinivasa Acharya. In Vrindavana, Shri Jiva Goswami gave him the title, kaviraja, “king of poets.” He wrote the following beautiful verse:

“Shriman Mahaprabhu is so kind that He manifests the nectar of the Hare Krishna mantra. The Holy Name will free all souls from the cycle of birth and death, from lower planets, from hell. The Holy Name will give one a taste of divine love for Radha-Madhava.

“Whether blind or dumb, anyone can drown in this flood of prema. In this way, Shri Chaitanya Mahaprabhu has filled everyone with love of God. But Ramachandra Dasa is so unfortunate that he couldn’t even taste a drop of that nectar.”

In the form of Karna manjari, he serves Shrimati Radharani in Vraja lila. His samadhi is in Dhira Samira Kunja next to Shrinivasa Acharya.

Ramachandra’s disappearance day is the Krishna triya in the month of Magh. He passed away in Vrindavan after the disappearance of Shrinivas Acharya.