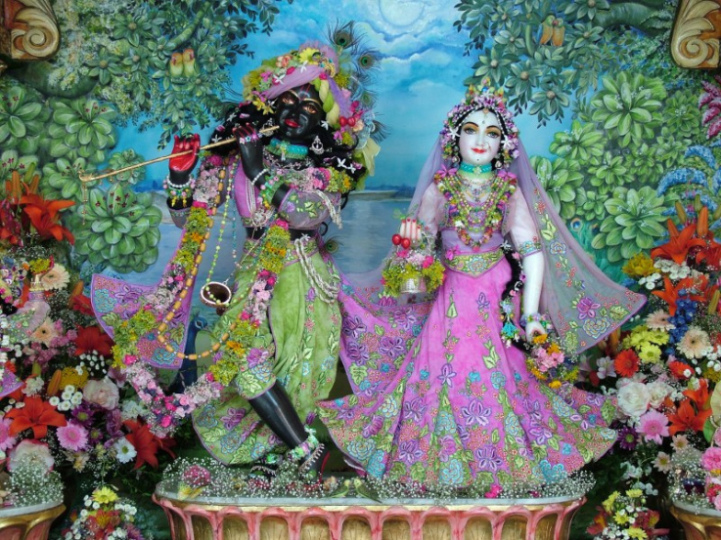 Once, Krsna warned Srimati Radhika to be cautious of Devarsi Narada. "Devarsi is a sage whose nature is very complicated," He said. "Sometimes he causes disputes between father and son, mother and father or husband and wife. It is best to always be cautious of him." But Srimatiji did not take particular heed of Krsna's words.

And so it happened that one day Lalita picked beli, cameli, and other flowers from the forest and began to string a beautiful garland for Krsna. After completing it, she discarded it and began to string a new garland. She repeated this action many times. Narada was hiding behind some trees, watching this intriguing scene. He approached Lalita and asked her about her unusual behaviour. Lalita said," Everytime I complete the garland, I feel that it is either too short or too long for Krsna. This is why I keep starting again."

The mischievous Narada suggested,"Krsna is playing nearby. Why don't you make Him sit beside you and string your garland by measuring it against Him?" Lalita agreed and called for Krsna. She strung a beautiful garland for Him that was just the right size, and placed it around His neck. They then waited for Radhaji, who had earlier asked Lalita to make the garland, telling her that She would be there soon. However, Radhaji was delayed by the sakhis who were busy decorating Her.

Previously, Sri Krsna had promised Narada to give him darsana of Him swinging with Lalita, and now Narada reminded Krsna of His promise and repeatedly requested Him to sit with Lalita on a nearby swing. They both sat down and swung back and forth as they waited for Radhika. In the meantime, Devarsi went to Srimati Radhika, singing," All glories to Lalita-Krsna, all glories to Lalita-Krsna!" Srimati Radhika respectfully greeted Devarsi Narada and inquired," Devarsi, Today you are very happily singing the glories of Lalita and Krsna. It seems that you have some astonishing news. What is it?" Narada smiled,"Aah, what a beautiful scene." he said. "Krsna, wearing a beautiful garland of forest flowers, is swinging with Lalita. If you don't believe me, then go there and see for yourself." Srimatiji did not believe him, but still, She went there. "How could He possibly swinging with Lalita in my absence?" She thought, but from afar, She could see Krsna and Lalita on the swing. She angrily returned to Her kunja and sat down, deeply immersed in a sulky mood, or mana.

Having waiting a long time for Radhaji, Krsna finally went to look for Her. He told Her about Narada's activities and how it came to pass that He was swinging with Lalita, and thus somehow pacified Her mana. He took Her to the swing and Lalita and Visakha pushed Them back and forth. This sweet pastime took place here.
E-mail me when people leave their comments –
Follow