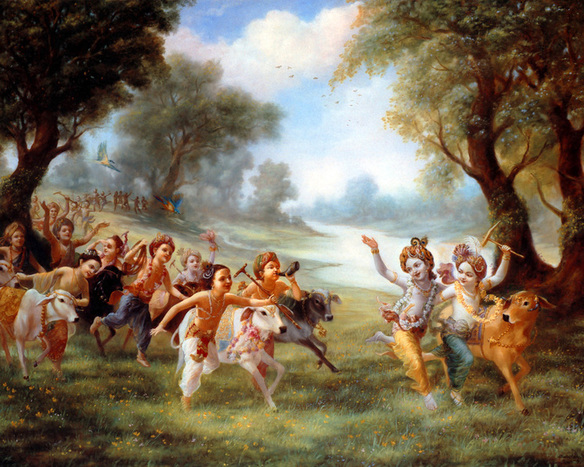 Today is Gopastami, the day on which Krishna and Balarama and other boys Their age, who previously had tended the calves, were given charge of the cows. This event is described in Srimad-Bhagavatam (10.15.1):

“When Lord Rama and Lord Krsna attained the age of pauganda [six to ten] while living in Vrndavana, the cowherd men allowed Them to take up the task of tending the cows. Engaging thus in the company of Their friends, the two boys rendered the land of Vrndavana most auspicious by imprinting upon it the marks of Their lotus feet.”

As stated in the purport, “Since Lord Krsna’s spiritual body had apparently grown slightly in age and strength, the senior men of Vrndavana, headed by Nanda Maharaja, decided to promote Krsna from the task of herding calves to the status of a regular cowherd boy. He would now take care of the full-grown cows, bulls, and oxen. Out of great affection, Nanda Maharaja had previously considered Krsna too small and immature to take care of full-grown cows and bulls. It is stated in the Karttika-mahatmya section of the Padma Purana:

‘The eighth lunar day of the bright fortnight of the month of Karttika is known by authorities as Gopastami. From that day, Lord Vasudeva served as a cowherd, whereas previously He had tended the calves.’

“The word padaih indicates that Lord Krsna blessed the earth by walking on her surface with His lotus feet. The Lord wore no shoes or other footgear but walked barefoot in the forest, giving great anxiety to the girls of Vrndavana, who feared that His soft lotus feet would be injured.”

The celebration was meant for only the cowherd men and boys, but Srimati Radharani also wanted to enjoy the fun, and so, because of Her resemblance to Subala-sakha, she donned his dhoti and other garments and joined Krishna. Thus, on this occasion, in temples in Vrindavan and elsewhere, Srimati Radharani is dressed as a cowherd boy.

The Lord is very kindly disposed toward the cows and the brahmans (go-brahmana-hitaya), and whoever serves them becomes dear to Him, too. Knowing this, devotees observe a special festival on the Gopastami day, dedicated to the worship of cows. In Vrindavan especially, but also the world over, devotees begin the festival by brushing the cows, painting their horns and bodies with artistic designs, and hanging flower garlands around their necks. Then a cow and her calf are selected, and an arati is offered to them. During the arati, devotees sing the Hare Krishna maha-mantra, and then they feed the cow, her calf, and indeed the entire herd, bananas, balls of gur (jaggery), and fresh grasses. Some devotees also recite the following mantra (Hari-bhakti-vilasa 16.252):

At the ISKCON goshala in Vrindavan, the program ends with a breakfast feast served to participants in the cowsheds.

Tags: gopastami
E-mail me when people leave their comments –
Follow